This story is part of a reporting partnership that includes

South Carolina’s top health official will recommend this week that the state decline creating its own health insurance exchange, one of the central tenets of President Barack Obama’s health care law. 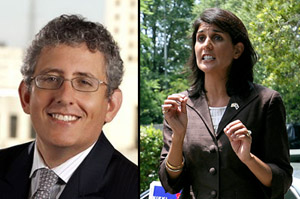 S.C.’s top health official, Anthony Keck, and Gov. Nikki Haley, not fans of the 2010 health law, are likely to decide to let the federal government run the state’s exchange. (Haley photo by MaryAustinPhoto via Flickr)

Instead, the state should let the federal government build the insurance marketplace in the state for now, Anthony Keck, the director of the state’s Department of Health and Human Services, said in an interview. That recommendation is expected to go to a committee appointed by the governor to study the issue on Friday.

South Carolina, a state dominated by health-law-averse Republicans who got a tea party boost in last year’s election, has been heading down this road for months. But the recommendation is the latest step in formalizing objections to the exchange — and it frames the move as pragmatism, even as the state hands over power to the federal government.

The No. 1 reason for the wait-and-see approach? The stakes are so low. If a state does nothing, Washington is required to step in and build an exchange by 2014. That thinking — as well as a list of technical and logistical problems — is swaying decision-makers in other states too, industry analysts say.

State officials say the 2014 deadline is too tight given that rules for the exchanges are not complete, which is one incentive to defer to Washington. Plus, if South Carolina officials don’t like the federally run exchange, they can always circle back and start their own later under rules issued by the federal health department in July.

“What is the first mover advantage for states to rush ahead and implement this, given all the uncertainty?” Keck asked. “States have the safety valve of being able to take it over when they want to.”

“Sometimes, the smartest thing when you’re doing something new like this is to wait,” he said.

The exchanges were devised as online shopping centers for consumers in the individual and small-business markets to compare and purchase health insurance. Exchanges would also allow lower- and middle-income families and individuals to collect federal subsidies, potentially worth thousands of dollars.

A draft recommendation Keck is preparing for the state’s Health Planning Committee says his department’s available resources are “fully committed to improving the current Medicaid program.” The program serves 900,000 low-income residents and expects up to 600,000 new enrollees in 2014 when the health care law expands eligibility. That expansion leaves little manpower to tackle exchanges too, the draft recommendation says.

Keck, the lead author of the document, also argues that the main function of the exchanges is to deliver the federal subsidies. That, according to Keck and other members of the subcommittee he chairs, “is solely a federal concern in which the state has no compelling interest.”

Instead, Keck proposes cultivating exchanges run by private entities, such as employers and consumer groups. He also recommends a push to make information about the cost of health care more transparent.

Federal officials have been wary of operating exchanges on behalf of states. They’ve argued that insurance regulation has long been a state matter, and exchanges should be an extension of that jurisdiction. This stance also deflects criticism that the health overhaul law infringes on states’ rights.

“One of the primary benefits of the [exchanges] is the flexibility afforded to states that enables them to set up an exchange to meet their unique needs,” said Bennett Blodgett, a spokesman for the federal agency overseeing exchanges.

The broader panel advising on South Carolina’s exchange future, created by Gov. Nikki Haley, must make its final recommendation by the end of November. The committee was initially set to make its recommendation last month, but requested an extension.

So far, South Carolina — along with 49 other states — has accepted a $1 million planning grant to begin contemplating the exchange. But in September, Haley, a Republican, said the state would not accept any more exchange funding, even as the committee continued studying the issue.

Blodgett confirmed the state had not applied for additional funds.

More states are warming to Keck’s position — wait and jump in later — on exchanges, said Brett Graham, a consultant at Salt Lake City-based Leavitt Partners, a firm that advises states and other clients on exchanges. It is run by Michael Leavitt, who served as Health and Human Services Secretary during the George W. Bush administration.

One reason is that even though states can get big grants to build exchanges, they would have to finance ongoing operations once they launch. By leaving the work to federal officials, they hope to dodge those potential costs.

Graham said states also believe there is no penalty if “they wait on the bench and then jump in” later, taking over a federally operated exchange. However, he points out, if a state decides after 2014 to launch its own exchange, the federal funding to build it will no longer be available. So far, the federal health department has awarded $515 million in grants to states to plan and build exchanges.

States that wish to open an exchange later than the Jan. 1, 2014, deadline — taking over from the federal government — will have to give Washington a year’s notice before doing so.

The details of what a federally run exchange would actually look like remain unclear. HHS has contracted with several technology vendors to begin developing some components, but has not publicly discussed details of its plan. A spokeswoman declined to elaborate.

That South Carolina seems primed to rebuff the exchange comes as no surprise advocates for building an insurance marketplace in the state.

“It was clear from the outset that this administration was resistant to the idea” of running its own exchange, said state Rep. Gilda Cobb-Hunter, an Orangeburg Democrat who introduced legislation to create one. Cobb-Hunter’s bill failed in the statehouse.

“With the need as great as it is in South Carolina, to say that idea won’t work here and we’ll wait for the feds to do it to me seems to be kicking the can down the road,” she said.

However, Cobb-Hunter acknowledged that the federal exchange — lampooned by critics on the right as part of an alleged federal takeover of health care — may work out just fine, especially compared with a version that could clear the conservative legislature.

Keck also seemed to nod to that idea. “Why would we drag it through the statehouse?” he asked, noting that many state lawmakers there view exchanges as a politically toxic distraction from other priorities.