In the last two years, pulmonary specialist Dr. Eduardo G. Martinez has become accustomed to the sight in his Hialeah office: newly insured patients flashing laminated healthcare insurance cards to show they are now covered under the Affordable Care Act.

“Most people hand you that card like they are giving you an American Express Platinum without a limit,” said Martinez, vice president of the Dade County Medical Association, the largest physician group in the South Florida county. 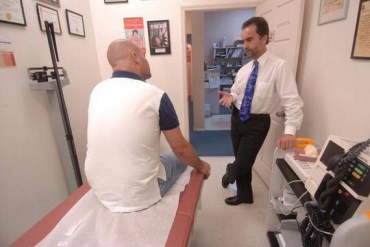 Dr. Bernd Wollschlaeger speaks to a patient at his North Miami Beach practice in 2007. Wollschlaeger, a family medicine doctor, has had to educate consumers who know little about their Affordable Care Act coverage plans while also juggling a higher patient load, more paperwork and issues with reimbursement since the passage of the act. (Photo by Peter Andrew Bosch/Miami Herald)

“We have turned people away,” Martinez said. “ I know some colleagues who said, ‘At this time we are not taking any Obamacare patients.’ It’s a preventative action to avoid having these problems.”

The ACA does not penalize doctors for refusing to take Obamacare patients, but those who do may be in violation of their their contractual agreements with insurance companies.

The stresses for providers then become evident from the moment new patients come in.

Some don’t know the name of their insurance companies. Many are surprised by high deductibles. Doctors are placed in the sometimes-difficult position of teaching patients that insurance doesn’t mean everything is covered.

“The level of health care literacy is difficult to deal with because it’s often very low,” said North Miami Beach family physician Dr. Bernd Wollschlaeger. “Am I now the explainer-in-chief, after the fact?”

Most new enrollees pick a plan based on sticker price — the monthly premium — ignoring other costs such as the deductible, the amount patients must pay before the insurer begins to cover costs, or co-pays, payments by the patient for covered services like doctor’s visits.

According to HealthPocket, a health insurance analysis company, the average 2015 deductible for a bronze plan, which is the lowest cost and least coverage plan, is about $5,000 The silver-level plans, which offer more coverage at a slightly higher price and are the most popular among consumers, have deductibles at about $2,650.

Until the deductible is paid, services doctors provide outside the ACA’s free preventative care screenings go unpaid, a situation that can become volatile when a screening reveals a chronic condition that requires deductible payments before treatment begins.

“They look at you like if you’re crazy and say, ‘No, but I have insurance,’” Martinez said. “We become the target of their frustrations. We are the doctors. We are the bad people. They have the card and [they think] we don’t want to see them.”

Wollschlaeger said explaining deductible costs has led to “bad blood” between him and several of his patients, with some even leaving his practice.

“I have to explain that it’s not me, it’s the insurance plan they chose,” he said.

Communicating with insurance companies and ensuring payment for services is often difficult, too.

Money isn’t the reason most doctors go into the profession, he said, but it is necessary to keep his practice afloat and pay his staff.

“People don’t understand that running a medical office is like running a small business,” Martinez said.

And then there’s the extra paperwork that must be completed, from charts for new ACA patients to quality of care self assessments.

Wollschlaeger said administrative tasks have become about 40 percent of his workload, up from 20 percent before the ACA. On Monday, he finished seeing patients and started paperwork at 6 p.m., a time he would have used for that modern-day rarity, house calls.

“Something has to give,” Wollschlaeger said. “More paperwork means less patient care.”

Steven Ullmann, director of the Center for Health Sector Management and Policy at the University of Miami, said the average load for a primary care doctor is about 3,000 patients a year. This year, Florida enrolled 1.6 million consumers in the federal marketplace, adding to the primary care burden.

According to a 2014 survey by the Physicians Foundation, 81 percent of doctors describe themselves as over-extended or at full capacity, up from 75 percent in 2012 before enrollment began. About 44 percent said they planned to cut back on the number of patients they see, stop taking new patients altogether, work part-time or retire.

Wollschlaeger has come up with his own solution to juggle the growing patient load: work more hours.

As the program continues to develop in the next few years, doctors say consumer education and streamlining of paperwork and payments will help.

“The success stories of the system are when a patient tells me that it’s the first time that they can get regular care,” Wollschlaeger said. “I want the system to work.”