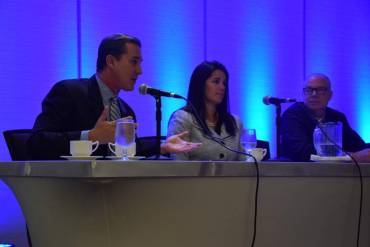 With a special legislative session set for next week, South Florida lawmakers, hospital representatives and health groups gathered Wednesday to discuss Medicaid expansion, the future of healthcare in Florida and a looming Supreme Court decision on subsidies.

Sen. Rene Garcia, a Miami Republican who chairs the Senate healthcare budget committee, in a panel discussion with Sen. Anitere Flores, R-Miami, and Rep. David Richardson, D-Miami Beach, said a health care crisis still exists in Florida after the Legislature adjourned without passing a budget. About 850,000 Floridians fall into the healthcare “gap” created when Florida chose not to expand Medicaid.

Garcia said he is frustrated with the House’s refusal to explore options for Medicaid expansion: “It just makes no sense to me that you cannot sit in a room and have a conversation as to how we are going to fix the problem.”

The panel offered some hope of a solution to the impasse, noting that House appropriations chair Rep. Richard Corcoran, R-Land O’ Lakes, called the Senate’s proposed Medicaid expansion plan “exciting” earlier this week, with the caveat that the Senate guarantees it will take up several other House proposals.

Still, no House Republicans attended the Health Foundation of South Florida’s forum, though they were invited.

Lawmakers at the forum also noted that a Supreme Court decision expected in late June could change everything if the court decides that financial assistance for Obamacare premiums will only be available from state-established insurance marketplaces. Florida and 26 other states have federally run marketplaces. About 1.07 million Floridians would become uninsured if the court rules for the plaintiff in King v. Burwell — more than any other state.