TIJUANA, Mexico – Irma Montalvo signed up for a health plan through California’s new insurance exchange last month, getting coverage for the first time in eight years.

But when she needed treatment for a painful skin rash, Montalvo didn’t go to a doctor near her home in Chula Vista. Instead she drove to Mexico, about 16 miles south. Her doctor, Cecilia Espinoza, diagnosed her with shingles and prescribed medication to relieve pain and head off complications. 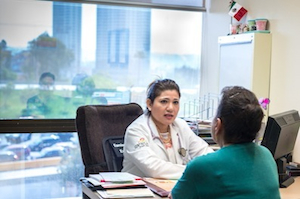 Irma Montalvo, a U.S. citizen, prefers to travel to Mexico to meet with her doctor, Cecilia Espinoza, even though she signed up for a health plan through Covered California (Photo by Heidi de Marco/KHN).

Montalvo, 64, said she comes to Tijuana in part because it costs just $15 to see the doctor. She can’t use her insurance for care outside California but it’s still cheaper because she doesn’t have to worry about a deductible. More important, she said, is that she feels comfortable with Espinoza.

“She listens to me,” said Montalvo, a U.S. citizen who was born in Mexico, said in Spanish. “I come here feeling really bad, and three days later I am better.”

Mexican immigrants living in California, Arizona, Texas and New Mexico have long sought health care in border cities like Tijuana, Mexicali and Nogales. The Affordable Care Act won’t change that, experts said, even though it has expanded coverage to millions of people, including many Latinos.

Naturalized citizens and legal residents are expected to continue traveling for check-ups, minor surgeries and dental care, drawn to treatment that is less expensive and a medical culture that is less hurried. Doctors speak their language and patients often can get appointments without long waits.

In fact, it’s possible even more U.S. residents may seek care with Mexican doctors, said David Hayes-Bautista, director of the Center for the Study of Latino Health and Culture at the UCLA School of Medicine.  Many Latinos in the United States live in areas with a huge undersupply of providers, and as new coverage increases the demand for care, waits for appointments could grow longer and more frustrating, he said.

“If you don’t have access to care, going to Tijuana may seem like a reasonable alternative,” he said.

Some of these patients now going to Mexico remain uninsured, or work for employers in the U.S. offering insurance plans that pay for medical care in Mexico. Others have signed up for Obamacare to cover emergencies or avoid a fine – but face high deductibles and out-of-pocket expenses. 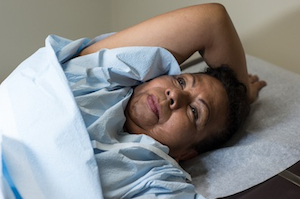 Irma Montalvo, 62, was diagnosed with shingles and says she doesn’t mind the trip to Tijuana to be treated because she trusts her doctor (Photo by Heidi de Marco/KHN).

“Even with insurance, it can sometimes be cheaper in Mexico,” said Steven Wallace, who is  associate director the UCLA center and has studied why Mexican immigrants seek care in Mexico.

The majority of these patients are Mexican immigrants with green cards or U.S. citizenship who can travel freely across the border. One 2009 study by Wallace found that nearly half a million Mexican immigrants living in California receive medical, dental or prescription services every year south of the border.

Lorena Villanueva, who cleans houses in Riverside County, Calif., came to Tijuana on a recent day because of a flare up of allergies that gave her a sore throat and a rash on both arms. Villanueva bought a plan through  Covered California for about $150 a month. Joining a plan that her husband has through his work as a car salesman was too expensive.

“To be honest, I like to come here better even if I have insurance,” she said. “Over there it’s wasting money and wasting time.”

The Obamacare plan, she said, is just for emergencies. For most everything else, Villanueva said she will continue driving the 70 miles to Tijuana. “It’s a long drive … but for me, it’s worth it,” she said.

The medical office where she sees her doctor is in an eight-story, modern building just steps from the border and across the street from a bus station. Two flags – one American and one Mexican – fly above the building owned by SIMNSA, a cross-border health plan.

Just outside, security guards monitor who enters and a line of taxis waits to give patients rides. Inside, the clinic is bustling with people seeking to get their eyes checked, lab results read, cavities filled, hearts examined, allergies treated and children immunized. 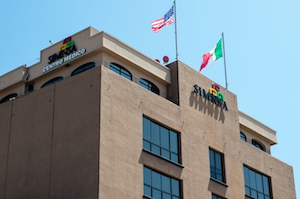 SIMNSA was the first Mexican HMO to be licensed as a health care service plan in California with a network that extends through the border cities of Tijuana, Tecate and Mexicali (Photo by Heidi de Marco/KHN).

Licensed in California and overseen by the state’s Department of Managed Health Care, SIMNSA offers health insurance to employees of American companies in San Diego and Imperial counties. The employer plan offers the essential benefits required under the ACA, administrators said.

Patients not on the SIMNSA employer plan can walk in to the clinic and pay out-of-pocket. Or, like Montalvo, they can pay a small membership fee allowing them to see an internist for $15 and a specialist for $25.

Ophthalmologist Josue Delgado has been seeing Alberto Luna, 49, for several years. Luna lives just over the border in National City and has a SIMNSA policy through his job at a hotel in San Diego. Luna said he never has to wait to see Delgado and that the doctor treats him like a friend.

“We know each other by first name,” Delgado said of Luna.

On this day, Luna was seeking follow-up treatment for a  complication of his diabetes — bleeding in his eye. Delgado explained it  was causing blurry vision and wasn’t healing. The doctor gave Luna a note for his boss so he could spend a few more weeks at home before returning to work. “Make sure you rest,” Delgado told his patient, shaking his hand.

Xochitl Castaneda, director of the health initiative of the Americas at U.C. Berkeley’s School of Public Health, said Mexican clinics offer something not always found in the U.S. “In Spanish, we say calidad and calidez, quality and warmth,” she said. “When you are sick, you need medical support. You also need emotional support. That is something that Mexican physicians give.”

The question of quality is not settled. Experts say that some hospitals, doctors and clinics are comparable to the U.S. but that quality varies widely. Some studies find that patient satisfaction with Mexican providers is generally good while others find the care needs improvement.

It is that warmth that brings Montalvo back to Tijuana, despite her new Covered California plan. After checking Montalvo’s rash, Espinoza told her to continue the medication and come back in a few weeks. She also told her to call – night or day – if she had any questions.

“You are responding perfectly” to the medication, Espinoza told Montalvo. “I’m happy.”

Montalvo smiled at her doctor before heading down to the pharmacy. “Que dios le bendiga,” Montalvo told her. “May God bless you.”

Even With Obamacare, Many Latinos Still Seek Treatment In Mexico