Like most people at Haven for Hope,  San Antonio’s largest homeless shelter, James Harrison doesn’t plan on staying long. “I lost my apartment and had nowhere else to go,” he explained.

But while he’s here, he’s taking advantage of free medical testing — a screening for dormant tuberculosis.

“People don’t even think about TB anymore because you don’t see it anymore,” said Harrison, who is 55. “There’s nothing that tells you, until it’s too late, that it’s there.”

Tuberculosis is an airborne bacterial infection that attacks the lungs and can be deadly. There’s a common TB skin test, but the San Antonio health department says the skin test takes 48 to 72 hours to produce a result and is susceptible to false positives. A blood test is more accurate and requires only 24 hours to get results. A vial of blood can be tested to see if people are carrying TB without showing symptoms. That’s called latent tuberculosis infection, a condition that puts them at much greater risk of developing active, contagious TB if they are exposed again.

“It goes into your lungs and usually it hides there dormant for years and years. Although it sounds very scary, it is completely treatable,” said Dr. Barbara Taylor, an infectious disease specialist who is part of a program called Breathe Easy South Texas. BEST is an ambitious $2 million effort to test at-risk people in 20 Texas counties — an area larger than some entire states.

“It’s not a problem that’s on the south side or east side. It’s a problem all across Bexar County,” said Tommy Camden, TB services manager with San Antonio’s health department. He said tuberculosis cases hit both urban and rural communities.

“It doesn’t care what color you are, how much money you make,” he added. “As long as you’re breathing, you’re susceptible to catching tuberculosis.”

Still, some populations are at greater risk of carrying the TB bacterium: the homeless, IV drug abusers, people with diabetes and those born in some other countries. For most people who test positive, the diagnosis of latent TB comes as a surprise. But testing is easy.

A Third Of The Planet’s Population Is Infected

“We’ve got some huge challenges ahead of us,” Camden said, because there is so much latent TB out there. 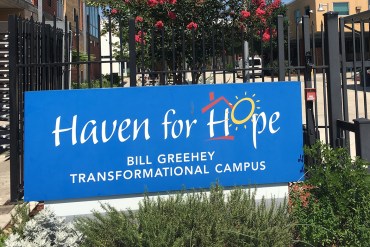 The Haven for Hope, a homeless shelter in San Antonio, is one of dozens of locations around 20 South Texas counties where people are now being tested for latent tuberculosis infections. (Wendy Rigby/Texas Public Radio)

Texas, California, Florida and New York have the highest rates of tuberculosis in the U.S. Camden said he hopes those states can mimic the BEST program, which screened 3,500 people last year. Roughly 9 to 10 percent were found to have latent TB.

“I am passionate about this because this condition can affect you when you least expect it,” said nurse Diana Cavazos with University Health System. She said those who test positive are given X-rays and a 12-week course of antibiotics — even transportation to the appointments if they need it, free of charge.

At the moment, the BEST program is funded through the Medicaid waiver Texas has with the federal government. But future funding is a question mark. The threats in Washington, D.C., to cut Medicaid have sown uncertainty at precisely the time the testing program is planning to expand.

This story is part of a partnership that includes Texas Public Radio, NPR and Kaiser Health News.

South Texas Fights Tuberculosis One Blood Test At A Time