The clients of the Ravenswood Family Health Center, a community clinic in East Palo Alto just two miles away from Facebook’s sprawling headquarters, live in a very different Silicon Valley.

They are also, in many ways, a microcosm of the population the Affordable Care Act was meant to help.

Many earn between $5 and $15 an hour, don’t own or use computers and are more comfortable speaking Spanish than English. Sixty-five percent of East Palo Alto’s population is Latino, a group seen as crucial to the success of the health law. Many lack health insurance and pose a lower financial risk because they are typically younger and healthier than others.

Yet California, with the greatest number of Latinos in the country, is far behind in reaching this population. And across the nation, the picture appears even worse.

Those who primarily speak Spanish are largely being left out of the first wave of coverage under Obamacare. Many missed the late December deadline for enrollment in plans beginning Jan. 1. People must sign up by March 31 or face a penalty. 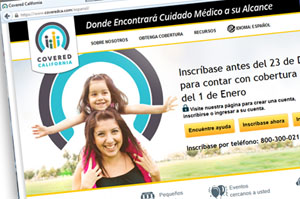 In part, the lag in sign-ups among Spanish speakers reflects a digital − and a cultural − divide. Many are hesitant about handing over personal information to strangers over the Internet, advocates say. This group tends to be less educated, and have lower incomes and less access to technology than fluent English-speakers.

When Elizabeth Gonzalez, 31, started getting migraines her doctor prescribed medicine that cost $300. She had health insurance provided through a San Mateo County program for low-income adults, but the medicine wasn’t covered and she couldn’t afford it.

“I guess I don’t need it,” she remembers thinking.  Then she started wondering whether the new health law might offer a better plan.

Gonzalez, a part-time library aide, started hunting for resources to help her decipher the Affordable Care Act. Though a Los Angeles native, she was raised in Morelia, Mexico and  preferred to have the law explained to her in Spanish.

California’s health insurance marketplace, Covered California, has had a functioning Spanish-language website since Oct. 1 – which puts it ahead of most of the rest of the country. But Gonzalez couldn’t access the site from home because she doesn’t have Internet service or a smartphone. 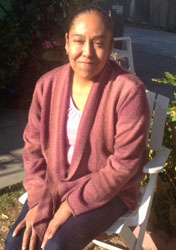 “With my budget, I don’t have access to that,” she said in Spanish. “I have to limit myself to the primordial.”

Instead, she relied on staff at the county’s human services office, two floors up from the library where she works, to guide her.

Staff members there told her she needed to fill out an application and to wait for up to a month to hear whether she was eligible for Medi-Cal − California’s insurance program for the poor. Discouraged, she made repeated telephone calls to the hotline for Covered California.

“There’s no one picking up, probably because there’s not enough people,” she said. “We need more information in poor communities and places to help you fill out forms so you know you’re doing it correctly. There’s not enough [information] in Spanish.”

According to the latest data released by the state, less than 5 percent of California’s roughly 110,000 signups in October and November were completed in Spanish.

In other parts of the country, Spanish speakers are worse off.

In the 36 states that rely on the federally run insurance exchanges, including Texas and Florida, Latinos until recently couldn’t enroll online in Spanish. CuidadoDeSalud.gov − the Spanish-friendly version of the federal marketplace − wasn’t fully working until Dec. 6, more than two months after its English counterpart, HealthCare.gov, launched on Oct. 1.

Officials decided to hold off opening enrollment on CuidadoDeSalud.gov until they addressed the technical glitches plaguing the English version. Even now, the Spanish website is rife with grammatical errors.

Federal officials note they have bilingual call centers, but Spanish-only calls to the federal exchange’s call centers barely totaled 180,000, or the equivalent of 3.5 percent of all calls, as of Dec. 10.

Unlike English speakers, Latinos who speak Spanish still don’t have the option to window-shop for plans before creating an account. The section in which customers can consult plans before signing up with a username and password is still non-existent in Spanish.

With many Latinos missing the deadline to be enrolled for coverage in the new marketplaces on Jan. 1, community organizers have shifted their attention to March 31, when the enrollment period for 2014 officially closes. Consumers who don’t enroll by this date will face a penalty. Medi-Cal enrollment will remain open, however.

“Most of our community is going to be focused on that March 31 deadline, and that’s where the big push will be,” Jane Delgado, the president and CEO of the National Alliance for Hispanic Health, an advocacy group based in Washington D.C., said earlier this month. “I’m less concerned about getting everybody enrolled quickly than about getting people enrolled in plans that fit their needs. I have no doubt people will enroll. They just need better information and local navigators they can trust.”

Adding to their worries, Latinos living in households with undocumented relatives often fear that signing up for a government run program will lead to unwanted scrutiny and even deportations. Others are wary of getting cheated or having their personal information hacked online.

Mindful of the mistrust, Ravenswood has been careful to develop a bond with its patients.

The clinic has eight certified enrollment counselors to help clients determine what kind of insurance they need and can afford.

“The majority of people coming in are people who we have to help 100 percent. We’re both translating and explaining everything, even when they do speak English,” said Ravenswood CEO Luisa Buada. “In general, everyone really, really wants someone to hold their hand through the whole process.”

‘We Wanted To Be Sure This Wasn’t A Scam’

Maria Garcia, 51, is among the roughly 200 people Ravenswood has screened or enrolled since October 1. Garcia, whose husband supports the family with his manufacturing job, went for help in part because she was concerned about fraud.

“Latinos − we don’t trust easily,” she said. “We wanted to be sure this wasn’t a scam.”

Garcia doesn’t speak English and though she has a computer at home, “I haven’t learned to use it,” she said. She generally relies on her children to search the Web for her and to translate the information she needs.

This time, the staff at Ravenswood helped her.  Starting in January, she’ll be paying $36 a month for coverage for her and her husband thanks to a government subsidy.

After her discouraging experiences with the county office and the various hotlines, Gonzalez ended up at Ravenswood as well. It was just across the street from the library. Staffers quickly told her she qualified for Medi-Cal. Her migraine medication will now be covered.

Ravenswood’s counselors are booked solid through the end of January. Buada and her staff have set up six enclosed booths, each with a small table, a chair, a Lenovo computer and a wrap-around black-and-white curtain, so that people who don’t have a computer or Internet access at home can feel comfortable coming in.

“We are very good with cellphones or email, but to use that website, you actually have to have access to a computer. That’s a problem,” said the National Alliance for Hispanic Health’s Jane Delgado.

Even with the possibility of federal subsidies, some Latinos can’t afford coverage and will remain uninsured.

“We’ve had a lot of people come in interested,” Buada says. But when they see how much it’s going to cost, “they say, ‘I can’t pay for this,’ and leave.”

Many Spanish Speakers Left Behind In First Wave Of Obamacare