While the Medicaid expansion may lead to a dramatic rise in emergency room use and hospitalizations for previously uninsured people, that increase is largely temporary and should not lead to a dramatic impact on state budgets, according to an analysis from the UCLA Center for Health Policy Research released Wednesday.

Researchers reviewed two years of claims data from nearly 200,000 Californians, including a group  who had enrolled in public programs well in advance of the expansion of Medi-Cal,the state’s version of Medicaid, in January. These programs were designed to ease the expansion of Medicaid by providing insurance to low-income adults who were not eligible for Medi-Cal at that point but would be when the health law’s expansion went into effect earlier this year. The researchers  divided the group into four categories, based on the researchers’ assessment of each group’s pent-up demand for health care.

In July 2011, after being enrolled in California’s Low Income Health Program, the so-called “bridge to reform,” the group with the highest pent-up demand had a rate of costly emergency room visits triple — or more — that of the other groups. But from 2011 to 2013, that high rate dropped by more than two-thirds and has remained “relatively constant,” according to the analysis.

“We were hoping that this would be the case,” said lead author Jerry Kominski, director of the UCLA Center for Health Policy Research, “because we think that that’s what access to care does for low-income individuals … that there’s an additional increase in demand for services and that that demand, or utilization, drops off pretty rapidly.”

Rates of hospitalization for the “highest pent-up demand” group also started high and dropped by almost 80 percent over the two-year period. Curiously, if ER and hospitalization rates were dropping, it’s reasonable that outpatient visits might rise. But that wasn’t the case; the rate of outpatient visits was largely unchanged during the two-year period. 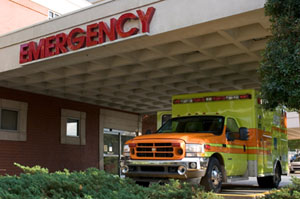 Kominski said that one of the fears of the Medicaid expansion was the potential high cost of low-income patients. He argued that this analysis should ease those fears: “What our findings say to the country is (that) concerns about Medicaid expansion being financially unsustainable into the future are unfounded.” Under the Affordable Care Act, the federal government provides 100 percent of the cost of the newly eligible under the Medicaid expansion, but in 2017 that contribution will phase down until it reaches 90 percent in 2020.

Twenty-seven states and the District of Columbia are implementing the Medicaid expansion; 21 have not, and in two states, Indiana and Utah, the question of expansion is an “open discussion,”according to a tally from the Kaiser Family Foundation. (Kaiser Health News is an editorially independent program of KFF.)

Matt Salo, executive director of the National Association of Medicaid Directors, said the study was “certainly consistent with what we hope to do” by expanding health insurance access. He said insurance is “just the first step, the next step is health care homes so that the individual can actually get better care.”

One factor in helping drive down the higher rates of use, Kominski said, is better efforts at coordination for Medi-Cal beneficiaries. For example, virtually all Medi-Cal beneficiaries are now enrolled into a Medi-Cal managed care plan. “To the extent that other states don’t have adequate coordinated care mechanisms in place for their Medicaid populations, then the kinds of drop off that we observed in California may not occur there,” Kominski said.

The UCLA analysis makes explicit reference to — and rebuts — a similar study, the Oregon Health Insurance Experiment. In Oregon in 2008, 10,000 residents literally won Medicaid coverage in a lottery, creating a true randomized controlled trial opportunity for researchers who compared those who won coverage with those who didn’t, rarely possible to do in social policy research. Researchers later reported a 40 percent increase in ER visits in the 18 months after that expansion.

Kate Baicker, a health economist at the Harvard School of Public Health, was one of the researchers in the Oregon experiment. She said they did not find “any evidence of utilization tailing off over that 18-month window” and stands by her results.

Still, Baicker said that an increase in use of health care services, such as emergency room visits or hospitalizations, “does not mean that Medicaid should not be expanded. Part of the goal is to increase access to health care.”

The UCLA study was funded by the California Department of Health Care Services and Blue Shield of California Foundation, (which helps fund KHN’s coverage of California health care issues).

Spike in ER, Hospitalization Use Short-Lived After Medicaid Expansion