BAKERSFIELD, Calif. — Neonatologist Gurvir Khurana had only read about it in textbooks. Seeing it in real life has been a shock: baby after baby born severely anemic, lungs filled with fluid, bodies covered with rashes. Some only lived minutes; others died within days or weeks.

The cause: congenital syphilis.

They are all born to mothers with syphilis. Many of the mothers arrive at the hospital to give birth never having had prenatal care, unaware they have the disease — let alone that they could pass it along to their unborn babies. The infants who survive carry an elevated risk of long-term health problems.

The Central Valley — a vast agricultural and mostly low-income swath of California — has seen an unprecedented spike in congenital syphilis over the last few years. It’s part of an overall rise in syphilis and other sexually transmitted diseases across California and the nation.

“STD rates aren’t going to just stop,” said Natasha Felkins, a health educator for Planned Parenthood in Bakersfield, the main city in Kern County. “When health coverage goes away or when things are cut, we are going to see numbers increase and that’s going to affect all of us.”

Across the U.S., sexually transmitted diseases are at an all-time high, according to the Centers for Disease Control and Prevention. The rate of syphilis among women increased 27 percent from 2014 to 2015, and congenital syphilis increased by 6 percent. Preliminary data show the trend continued into 2016, with syphilis among women rising another 21 percent and congenital syphilis 4 percent.

The rise is worrisome, especially given that syphilis had almost disappeared by about 2000, said Gail Bolan, director of the CDC’s division of sexually transmitted disease prevention.

“There was great hope for syphilis elimination in the United States,” Bolan said. “Unfortunately, our national data now show that syphilis is thriving.”

Bolan said CDC officials are closely monitoring the epidemic of syphilis around the nation, urging states to explore the roles of poverty, limited health care access, drugs and incarceration and to address those factors. They are watching with particular concern the spike in cases among women, and encouraging more testing, treatment and education.

“Rises in women, especially women of reproductive age … are a bellwether for when we are going to start seeing more congenital syphilis,” Bolan said. 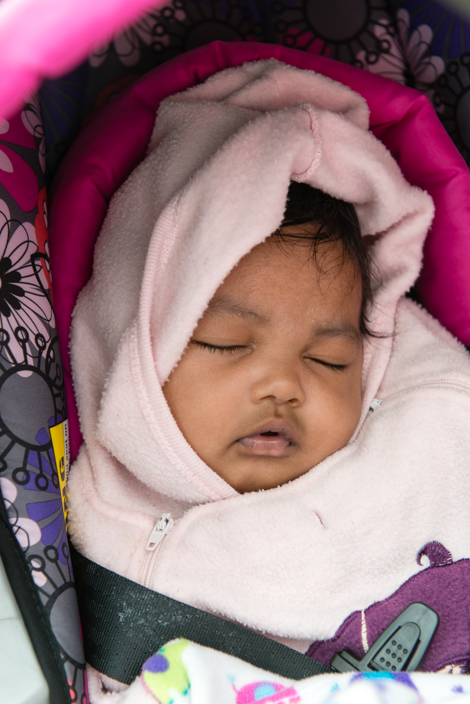 Wilbon has a 3-month-old baby and said she and the baby’s father both were tested for STDs early in their relationship. “It’s not only you,” she said. “It’s the baby. You have to protect the baby.” (Heidi de Marco/KHN)

In California, about two-thirds of syphilis cases are still among men who sleep with men, but the number of cases among women between the ages of 15 and 44 quadrupled from 2011 to 2015, according to the state Department of Public Health. And cases of congenital syphilis increased threefold over that same time period.

In 2015, nearly half of them were in Fresno and Kern counties. Kern County had 28 cases of congenital syphilis in 2015, up from one in 2011. Nearby Fresno County had 40 in 2015, up from two four years earlier. The rates in both counties dwarf others around the state.

Louisiana stepped up its response to the increase about four years ago, working with the CDC to expand testing sites, raise public awareness and increase education for OB-GYNs. Over the past year, the state also started nine regional STD task forces to address the problem. And the state passed legislation mandating syphilis testing twice during pregnancy.

Congenital syphilis cases now are starting to decline, said DeAnn Gruber, director of the infectious diseases bureau for the Louisiana Department of Health.

“We needed to do something,” she said. “And this wasn’t just a health department issue. It was something that everybody needed to work on.” The department is collaborating with local politicians, health providers and community groups to combat the problem, she added.

Georgia, too, is working to reduce its syphilis rates. Its health officials are encouraging people to “know their sexual health status” by getting tested for other STDs at the same time they are tested for HIV. The state health department is working with night clubs and with health providers around the state to increase testing. 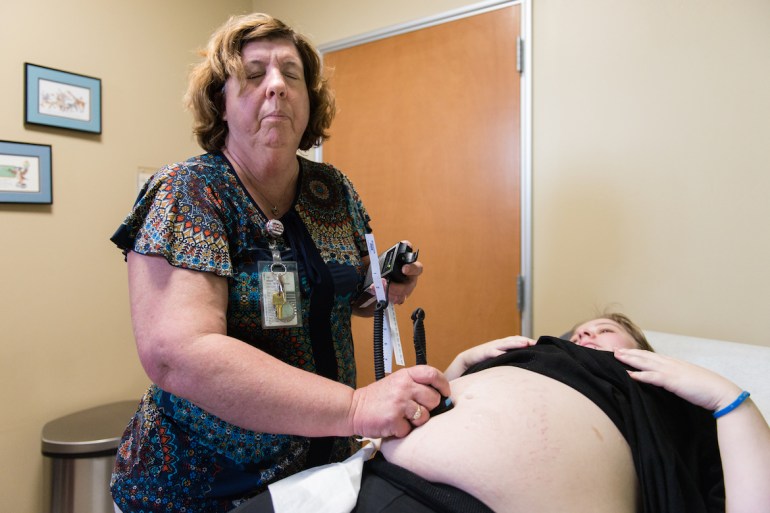 Vyn Wayne, a nurse practitioner at Clinica Sierra Vista in Bakersfield, examines patient Serenity Thomason in February. Due to the increase in congenital syphilis diagnoses in Kern County, Wayne informs all her pregnant patients about the sexually transmitted disease during their prenatal appointments. (Heidi de Marco/KHN)

State and local health officials and medical providers around the U.S. are uncertain of the precise reason for the sharp rise in such cases, but they believe one contributing factor is that many women get prenatal care too late, or not at all.

They also attribute the problem to poverty, drug use that leads to risky sexual behavior, and lack of awareness of the risks of syphilis and other STDs. Also to blame, they say, are changes in sexual behavior, including reduced condom use and a tendency to have more partners.

At the federal level, CDC officials say the rise in syphilis and other STD cases is due in part to budget cuts in state and local STD programs that have resulted in diminished access to care. 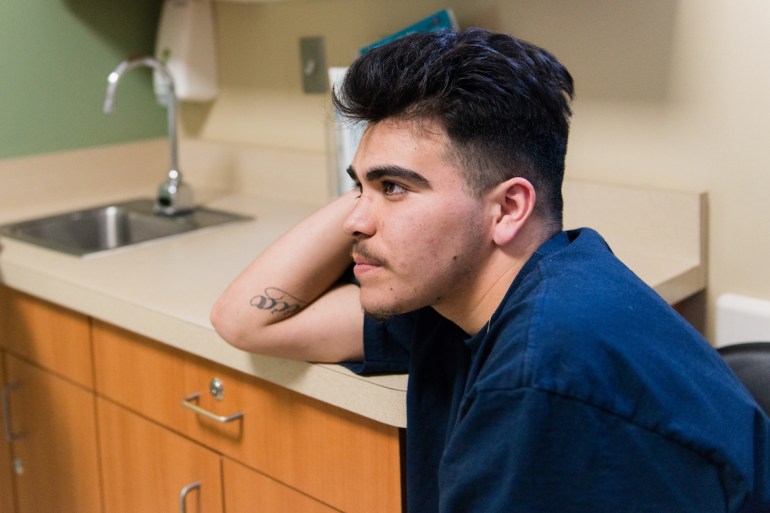 Steven Amador, 18, waits in the exam room with fiancée Serenity Thomason in February. Amador said he feels lucky he hasn’t contracted an STD. “I feel like I got through a land mine in Bakersfield.” (Heidi de Marco/KHN)

Many sexually transmitted infections are asymptomatic and go undiagnosed until they really start to cause damage. Untreated, they can lead to serious health problems, including blindness and infertility.

“We see very, very severe complications,” said Heidi Bauer, chief of the STD control branch at the California Department of Public Health. “And as we see these rates increase, we are inevitably going to see … these complications increase and have devastating health consequences.”

California recently awarded $5 million to counties around the state in an effort to reduce STD rates.

In Bakersfield, as many as 40 people a day now visit the county-run health clinic for STD testing and treatment, said Denise Smith, the county’s director of disease control. For those who are at high risk, the clinic sometimes doesn’t wait for the test results and just treats the patients as if they were infected. When people test positive, clinic staffers send home medication for their partners, too.

The Kern County Public Health Services Department has embarked on an information campaign with the slogan “Know Your Risk.” Staff members have posted billboards around the county, distributed fliers and produced public service announcements. Many feature an image of a pregnant woman with the words: Syphilis. A Silent Killer.

“Babies were dying,” said Michelle Corson, spokeswoman for the department who helped design the campaign. “That was the heart of the crisis.” 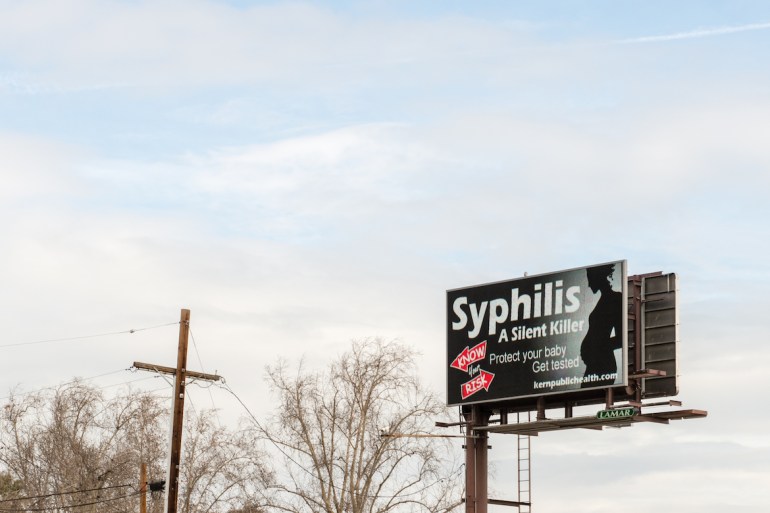 The department is also working with health clinics and others to get the word out about the risks, she said. “This is something that public health cannot do alone.”

Renee Nichols, 22, said she regularly comes to Planned Parenthood for birth control and STD testing. About four years ago, Nichols was treated for syphilis, which she contracted while she was addicted to methamphetamine. Nichols, who is now clean and studying to be a physical therapist, said that at the time, STDs were the last thing on her mind.

“You’re just busy thinking about drugs,” said Nichols, who lives in Bakersfield. “You’re not thinking about if I have sex with this person that I might get a disease.”

All states require pregnant women to be tested once for syphilis during pregnancy, but CDC officials say that to minimize the risk, they should be tested a second time in the third trimester. The best way to prevent congenital syphilis is to prevent the women from getting the disease — and to treat them quickly if they do, Bolan said. The problem is that some women are not in prenatal care, and some doctors don’t recognize the risks. 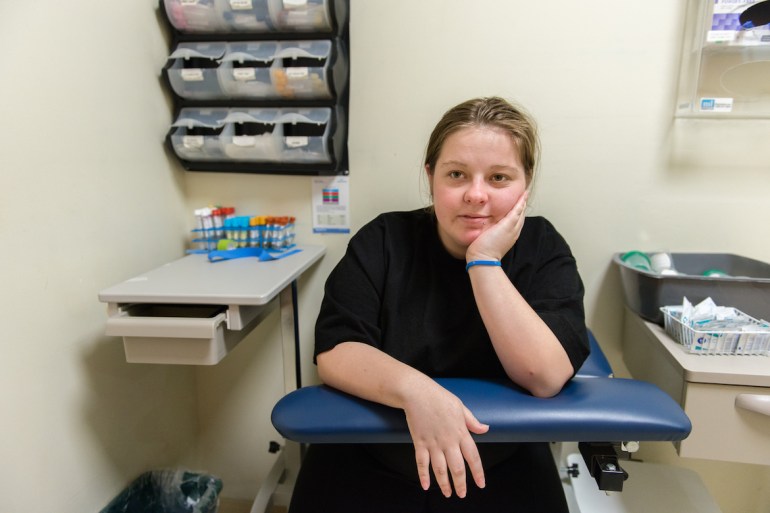 Thomason waits for a blood test for congenital syphilis during her prenatal visit at Clinica Sierra Vista in February. (Heidi de Marco/KHN)

Vyn Wayne, a nurse practitioner at the Bakersfield site of Clinica Sierra Vista, a community health center, has seven pregnant patients with syphilis. Girls as young as 16 or 17 are showing up pregnant and with syphilis, Wayne said. “We’ve just been floored. It’s terrifying.”

One afternoon in February, Wayne saw 18-year-old Serenity Thomason, who wore slippers with hearts on them. Wayne ordered a syphilis test for Thomason, who was six months pregnant.

She explained to Thomason that syphilis is contracted through sex and can be treated. But people often don’t know they have it, and it can be “deadly to babies,” she said.

“That’s scary,” said Thomason as she rubbed her stomach. “I never heard about syphilis.”

Spike In Syphilis Among Newborns Driven By Broader Epidemic