They met on a blind date in 1949 and married two years later. They lived in the same Cape Cod-style house in Silver Spring for nearly 50 years. So when Leonard Crierie was diagnosed with Alzheimer’s disease in 2005, there was no question that his wife, Betty, would take care of him at home for as long as she could.

Betty led him into the shower, helped him dress each morning and took him everywhere with her because, once he started wandering, as some dementia patients do, she dared not leave him alone. She learned how to change the colostomy bag he wore since he’d survived rectal cancer years earlier. She slept, fitfully, with a monitor by her bed so that she could respond if he needed her at night.

Video: In Sickness and In Health: Elderly Caregivers

“It was difficult, but I was able to take care of him,” says Betty, now 80. “Because it happens slowly, you don’t realize how bad it’s getting.”

She agreed to have Leonard attend an adult day program at nearby Holy Cross Hospital — he enjoyed socializing there — so that she could get a few hours’ break several times a week; she found a Holy Cross caregivers support group very useful. But she refused the pleas from her three adult children to hire an aide to help at home. “I always felt like I had it under control,” she explains, though her children thought the $18-an-hour cost also troubled a frugal woman who shops at dollar stores.

As the months passed, “we could see the stress level affecting her,” recalls her daughter Linda Fenlon. “The frustrating part was, we wanted her to have some independence, some quality of life. But she saw it as her duty in life to take care of him.”

For four years, Betty Crierie rarely asked for or accepted her family’s help, until a Wednesday last June. As she left her support group meeting, she remembers, “I got this funny feeling in my chest.” It worsened on the 10-minute drive home. She called her daughter and said, “I’m calling 911. I think I’m having a heart attack.”

‘In Sickness And In Health’

Caring for a sick or disabled elderly relative exacts a toll — physical, emotional, financial — on any family member, but being a spousal caregiver brings particular challenges.

“Spouses are older and dealing with their own age-related health limitations,” says Steven H. Zarit, a Pennsylvania State University gerontologist. The tasks they shoulder have grown more demanding: Family caregivers now administer arsenals of medications and undertake procedures, from wound care to dialysis, that were once the province of medical professionals.

Moreover, today’s longer life spans, in which once-fatal conditions such as heart disease have become manageable chronic illnesses, mean that the “sickness” part of “in sickness and in health” can last for many years. Spouses determined to single-handedly honor their vows, says Suzanne Mintz of the National Family Caregivers Association, “are using their old rules to fight a new problem.”

For information, support and referrals for spouses and other family caregivers, contact:

The medical and psychological literature have long reported that caregivers face risks to their own well-being, especially when they’re caring for people with dementia. Caregivers under stress have higher levels of depression and anxiety; their immune systems suffer. A 2005 Commonwealth Fund overview found that caregivers of all ages reported chronic conditions — including heart disease, diabetes, cancer and arthritis — at nearly twice the rate of non-caregivers, 45 percent vs. 24 percent.

In an oft-cited study published in the Journal of the American Medical Association in 1999, University of Pittsburgh researchers followed nearly 400 elderly spousal caregivers for four years and reported that those experiencing mental or emotional strain had 63 percent higher mortality rates than non-caregivers. (Caregivers not experiencing emotional or mental strain did not have elevated mortality rates.)

And a study published this year by a team from the University of South Florida and the University of Alabama at Birmingham found that high caregiving strain among spouses increased the risk of strokes by 23 percent; the association was particularly strong among husbands caring for wives.

“Spouses are likely to take on more than they can reasonably do,” Zarit says.

Betty Crierie was the classic example: Caring for her increasingly disabled husband, trying to shelter their adult children from the burden, unwilling to bring in a costly home-care aide when she felt she was doing fine on her own — until she had her heart attack. “We didn’t realize how much she was doing until we took turns taking care of Dad ourselves,” Linda Fenlon says. “It was so labor-intensive. We very quickly realized she couldn’t continue.”

While their mother recovered, the children moved their father into a nursing home, a wrenching act for all concerned. Betty visited Leonard there two or three times a week, continuing to do his laundry at home, until he died five months later at age 83.

Why is it so difficult for older caregiving spouses to seek help? Zarit’s research has shown that compared with adult children taking care of an ailing parent, spouses don’t turn to adult day programs until later in the course of illness, and they’re more apt to withdraw the participant after a short time.

Sister Kathy Weber, who leads the Holy Cross support group that Betty Crierie attended, sees a Depression-era-bred reluctance to spend money on care, even when couples can afford it. “They’re supposed to get along somehow and squirrel it away for their kids – who want them to use it now, for their care, which would make the children’s lives easier, too,” Weber says. 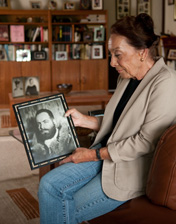 Sheila Fridovich says while she was taking care of her husband Bernard “I couldn’t eat; I couldn’t breathe; I didn’t have a moment’s peace.” He now lives in a specialized dementia unit at a Veterans Administration facility in Baltimore. (Kevin Kennedy)

Spouses don’t want to lose control of their homes or their relationships. Sometimes they hope to protect their partners’ dignity, not wanting children to see how diminished they’ve become. “There’s a lot of pride there,” Weber says.

What might help, caregiver advocates say, is for health providers to regard older couples as a unit, recognizing that a caregiver’s compromised health could prematurely institutionalize an ailing spouse. Some geriatric practices already do so. “On the intake forms in doctors’ offices, there should be questions to identify whether someone is a family caregiver,” suggests Mintz. “That would alert the physician and the staff to the situation and raise questions about that person’s own health. Is she taking care of herself?”

Meanwhile, President Barack Obama’s proposed 2011 budget would add $102.5 million for family caregiving programs, “a step in the right direction,” Mintz says. The money would boost existing programs that serve family caregivers, including training and counseling, referrals, respite care, transportation, adult day programs and home care. AARP analysts estimate the increased funding could help an additional 200,000 families. Family caregivers can use the help: Medicare pays for doctors and hospitals but provides only very limited post-hospitalization home care, and Medicaid (which covers only the poor) allots most of its dollars to nursing homes. The financial burden of caring for a spouse at home falls mostly to families themselves.

But even with better support, watching a partner decline is difficult. “They are about to lose their lives as they’ve known them,” Weber explains.

That’s what happened to Sheila Fridovich, whose husband, Bernard, developed Pick’s disease, a form of dementia, in his late 60s. Sheila kept him at home in Annapolis, eventually hiring a daytime aide, for nearly six years.

“I couldn’t eat; I couldn’t breathe; I didn’t have a moment’s peace,” she acknowledges. Yet she refused to see a therapist or join a support group. “I needed to iron it out in my own head,” she says.

“We grew up in a generation where getting help from a therapist is not stigmatized,” theorizes her daughter Lauri Fridovich Lee, who joined a support group online. “For the older generation, it is.”

Eventually, consulting with a Veterans Affairs physician about drug coverage, Sheila discovered that Bernard, a Navy veteran, was eligible for admission to a specialized dementia unit at the VA Community Living and Rehabilitation Center in Baltimore. She moved Bernard there in 2006. At 79, he’s still a resident and gets excellent care, she says. But after a stroke, he cannot speak, and she’s not sure, on her Sunday visits, if he knows who she is.

“It’s a traumatic experience for a husband and wife, far more than for their kids,” Fridovich says now. She’s only 71, still working part time as an educational consultant, but “the way I live is not the way I lived before. I’m married but I’m not; I have a husband but I don’t. I’m in no man’s land.”


Paula Span
is the author of “When the Time Comes: Families With Aging Parents Share Their Struggles and Solutions.”

Spouses Face Hurdles When Caring For Themselves, Ill Loved Ones