As warmer temperatures herald the arrival of pesky mosquitoes, researchers are feverishly working on several promising vaccines against Zika, a virus notorious for infecting humans through this insect’s bite.

The speed and debilitating effects of last year’s Zika outbreak in the Western Hemisphere prompted a sprint to develop a vaccine. Just a little more than a year after the pandemic was declared a global health emergency, a handful of candidates are undergoing preliminary testing in humans.

But researchers say the uncertainty over whether the Zika epidemic will continue affects their ability to finish testing. They need locations with an active viral outbreak to conduct large-scale human trials and make sure the vaccine actually protects against disease.

“On one hand, you don’t want to see outbreaks of infection,” said Anthony Fauci, director of the National Institute of Allergy and Infectious Diseases. “But on the other hand, [without that testing] you might have to wait a long time to make sure that the vaccine works.”

All the vaccines currently being tested are in Phase I clinical trials, which means they are being tested for safety in a small number of people. According to a review paper published Tuesday in the journal Immunity, the vaccines represent a variety of scientific techniques to thwart the disease, ranging from inactivating the virus to manipulating its DNA.

The NIAID announced Tuesday it is launching yet another Phase I trial for a vaccine made out of proteins found in mosquito saliva. The product is intended to trigger a human immune system response to the mosquito’s saliva and any viruses mixed with it. If successful, the product could protect humans against a spectrum of mosquito-transmitted diseases, including Zika.

Col. Nelson Michael, director of the U.S. Military HIV Research Program at the Walter Reed Army Institute of Research and co-author of the paper, said he expects preliminary reports on the safety of some of the older vaccines in April. As of now, he said, it is impossible to guess which vaccine will prove most effective in providing immunity.

“Sometimes it’s difficult to predict which horse will win the race,” Michael said. 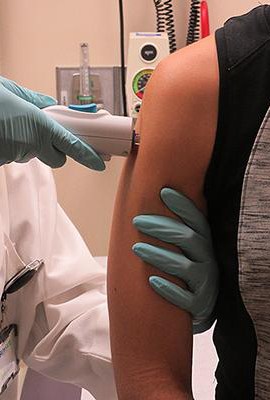 The NIAID is launching a phase I trial for a vaccine made out of proteins found in mosquito saliva. (Courtesy of NIAID)

Zika ― which is spread from infected people to others by mosquito bites or sexual contact, often infects people without showing symptoms. In some cases, it causes flu-like symptoms, such as fever, muscle aches and joint pain in adults ― and, in rare cases, Guillain-Barré syndrome, which can cause temporary paralysis. But it is most notorious for causing some children to be born with microcephaly ― a birth defect in which a child’s head is smaller than the average size ― if their mothers were exposed to Zika.

The virus garnered international attention after hundreds of cases of disabled babies surfaced in Brazil. It quickly swept through South America and the Caribbean before stopping on the southern coast of the U.S.

The World Health Organization declared the outbreak a “public health emergency of international concern” on Feb. 1, 2016, then ended the alert on Nov. 18.

Vaccines that meet the safety standard in Phase I clinical trials undergo subsequent rounds of testing to gauge effectiveness. To measure this, researchers rely on the gold standard of administering the vaccine to large number of people at risk to see if the medicine is effective. However, Zika’s recent arrival to the Western Hemisphere means researchers don’t know whether the virus will become a perennial threat, or a one-time explosion.

The uncertainty poses several implications for the surge in Zika vaccine development. A lull in the outbreak could cause significant delays in testing, pushing back the timetable for a commercially available product, Fauci said.

While researchers can use alternative methods to measure efficacy without large-scale testing, a decline in the circulation of the Zika virus could set progress back by years because the vaccine testing would be ineffective.

“If we don’t get a lot of infections this season in South America and Puerto Rico, it may take years to make sure the vaccine works,” he said.

Fauci expects to launch the next round of human trials for a DNA vaccine developed by the NIAID next month.

Michael also worries that a lag in the number of Zika cases could lead the private sector to pull funds from vaccine development. It takes millions of dollars to develop a drug or vaccine, and pharmaceutical companies play a critical role in making and manufacturing them, he said. But those companies have many competing interests, he noted, and if it is hard to test a vaccine this year, the public and private Zika prevention efforts may turn their attention elsewhere.

“This is a constant issue where you put your resources,” he said. 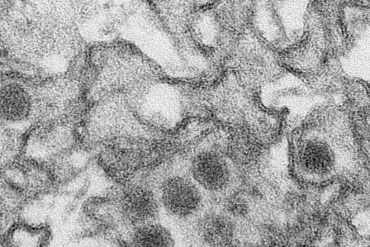 A transmission electron micrograph of Zika virus, which is a member of the family Flaviviridae, is shown. (Cynthia Goldsmith/CDC)

So far, signs suggest that the climate could be ripe for Zika again this year. Warmer-than-usual temperatures are affecting areas across the Western Hemisphere, CBS reported, including hotbeds of the Zika outbreaks in Brazil. The higher temperatures increase the voracity of Zika’s main transmitter, the Aedes aegypti mosquito.

In the United States, areas with populations of the Aedes aegypti are closely monitoring their numbers. Last year, Texas and Florida dealt with locally acquired cases of Zika infection.

In Texas, public health officials have monitored mosquito populations throughout the winter to track their numbers and any presence of the virus. Despite unseasonably warm weather, said Chris Van Deusen, spokesman for the Texas Department of State Health Services, they have seen lower numbers of the Aedes aegypti and no cases of Zika.

Van Deusen said the state is also monitoring the outbreak in Mexico, since heavy traffic across the border increases the possibility of transmission. Officials are expecting another outbreak of locally transmitted cases of disease, Van Deusen said.

“There’s so many factors that go into it, it’s really impossible to make an ironclad prediction,” he said.

This article was updated to add information about the vaccine testing process.

Sprint To Find Zika Vaccine Could Hinge On Summer Outbreaks