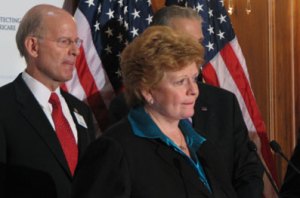 Legislation to ‘fix’ Medicare’s formula for physician payments is stalled in the Senate with opposition mounting. Bill sponsor Sen. Stabenow was joined by Vice Admiral Ryan (Ret.), of the Military Officers Association of America, and Dr. Rohack, AMA president at a news conference. (Weaver/KHN)

The bill would eliminate a 12-year-old formula that reduces Medicare payments to doctors when their costs exceed budget targets. Congress has stepped in to block the cuts in seven of those years.

The current proposal which was introduced last week by Sen. Debbie Stabenow, D-Mich., would do away with the formula and the scheduled pay cuts. Because these changes come with an estimated cost of $250 billion to the Medicare program and no off-sets, the bill has riled up budget hawks — both Republicans and Democrats — who say they will oppose the legislation until lawmakers find a way to pay for it.

Reid had announced last week that the Senate would hold a procedural vote on the measure Monday, but he backed away from that as he faced growing opposition on the financing. He continued discussions on the issue Tuesday but no new vote schedule was announced.

Stabenow argued at a press conference today that in previous years Congress did not make specific provisions to pay for limiting the cuts in payments to doctors. “This year, let’s agree, we’re not going to move forward with these kinds of drastic cuts” in physician pay, she said, dismissing the notion that the legislation needs to identify a way to cover its costs. “I wanna get this fixed.”

It’s an issue that has plagued physicians and patient advocates since 1997. At that time, Congress, in an attempt to curb the deficit, set up the so-called sustainable growth rate (SGR) formula to automatically reduce Medicare payments to doctors when spending on such reimbursements increases faster than the gross national product.

Over the years, physician groups have argued that the lower rates could lead doctors to accept fewer Medicare beneficiaries. And both parties have, at different times, supported temporary fixes they haven’t been paid for.

The American Medical Association says the rise in spending on physicians is often due to forces beyond their control, such as growing numbers of patients and an increasing preference to receive treatments in an office setting rather than at a hospital. The group has lobbied hard for Congress to block cuts in the past, and more recently, to scrap the entire formula.

In the House, lawmakers included a “pay fix,” as doctors call it, in their broader health care reform legislation. But Senate Democrats want to treat it as a separate measure in order to reduce the cost estimate of their overhaul measure.

The president of the AMA, Dr. J. James Rohack, joining Stabenow at Tuesday’s press conference, said his group “enthusiastically” supports the new legislation. “This bill is very important to the future of the Medicare program,” he said.

But, when asked repeatedly whether the passage of the Medicare payment bill would guarantee the AMA’s support of the broader reform efforts, Rohack dodged the questions, saying “We haven’t seen the Senate bill.”

Norbert Ryan, a retired vice admiral in the Navy who now leads the Military Officers Association of America, also joined the press conference. Tricare, the federal insurance program for members of the military and their families, pays physicians based on Medicare rates. Ryan said pay cuts for doctors could leave troops “worrying as they go into combat [whether] their sick child is going to be able to see a doctor.”

An AARP executive, David Sloane, endorsed the legislation at Tuesday’s press conference, too, saying physician reimbursement was a top priority for seniors who fear losing their doctors if payments drop too low.

In comments to reporters Monday, however, Sen. Mitch McConnell called the unfunded plan a “gimmick” and said it was a transparent attempt to conceal deficit spending in Senate Democrats’ health reform proposal.

Leaders in the House have also called on senators to find a way to pay for the bill, since they have put “pay-go” rules in place that will require them to be able to fund the legislation.

Meanwhile, a Senate aide with knowledge of the legislation said Sen. Kent Conrad, D-N.D., the fiscally conservative chairman of the budget committee, is working with Sen. Charles Grassley, R-Iowa, to carve out an amendment to Stabenow’s bill that would fully pay for the cuts.