WHITTIER, Calif. — Lynn Whittaker stood in the hallway of her home looking at the framed photos on the wall. In one, her son, Andrew, is playing high school water polo. In another, he’s holding a trombone.

The images show no hint of his life today: the seizures that leave him temporarily paralyzed, the weakness that makes him fall over, his labored speech, his scrambled thoughts.

Andrew, 28, can no longer feed himself or walk on his own. The past nine years have been a blur of doctor appointments, hospital visits and medical tests that have failed to produce answers.

“You name it, he doesn’t have it,” his mother said.

Andrew has never had a clear diagnosis. He and his family are in a torturous state of suspense, hanging their hopes on every new exam and evaluation.

Recently, they have sought help from the Undiagnosed Diseases Network, a federally funded coalition of universities, clinicians, hospitals and researchers dedicated to solving the nation’s toughest medical mysteries. The doctors and scientists in the network harness advances in genetic science to identify rare, sometimes unknown, illnesses.

At UCLA, one of the network’s sites, Andrew’s medical team would later map his genetic makeup, then bring him in for a week of exams and consultations with specialists. 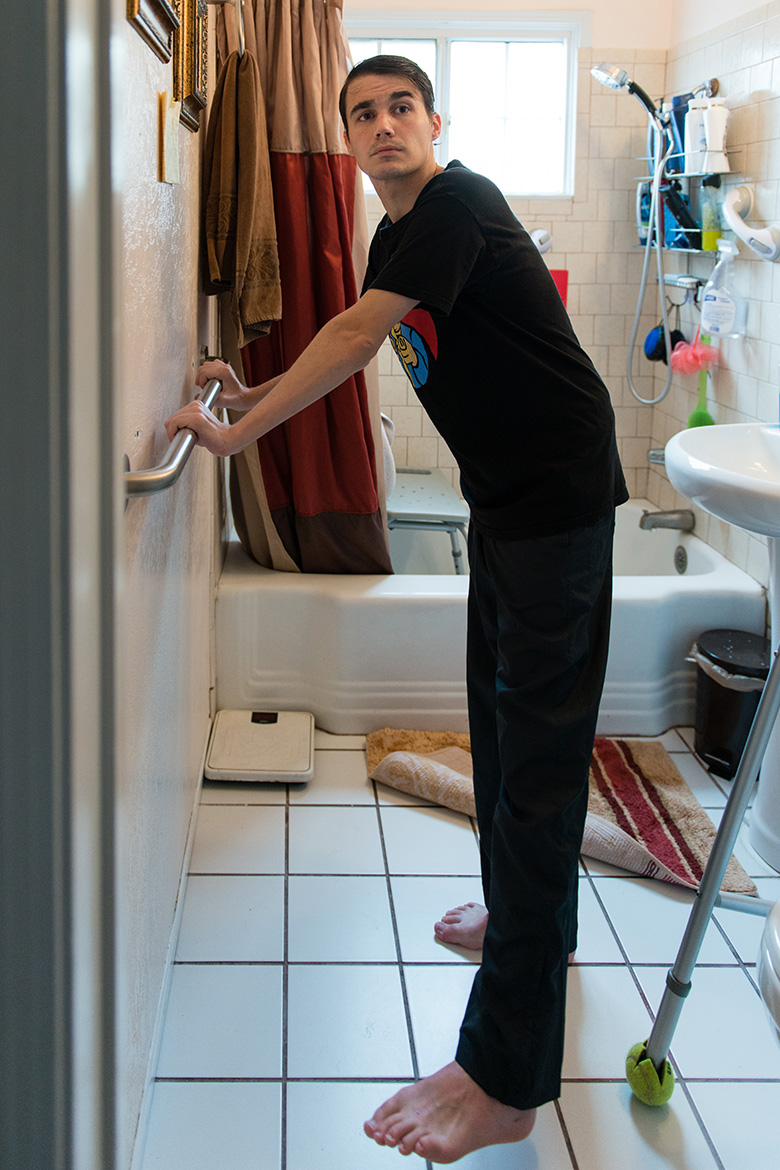 Andrew uses the towel rack in his bathroom to perform his daily exercise. (Heidi de Marco/KHN)

The Undiagnosed Diseases Network was founded in 2015 with a $43 million grant from the National Institutes of Health (NIH). Building on work already being done at NIH, the initiative expanded to include universities across the country: Duke, Columbia and Stanford are among the other sites. The goals are to provide answers for patients with mysterious diseases and to learn more about the disorders.

A proposal last month by President Donald Trump to cut the NIH budget by $5.8 billion could put the program in jeopardy.

Even with the best technology and the finest brains at work, progress is slow. Since its launch, the network has received nearly 1,400 applications on behalf of patients. It has accepted 545 for review so far. Just 74 of the cases have been diagnosed, including 11 at UCLA. Andrew Whittaker’s case is among many in progress.

It’s like battling “an unknown enemy,” said Euan Ashley, one of the principal investigators of the network’s Stanford University site. “That is a particular form of torment that other patients don’t have.”

A diagnosis can end families’ painful odyssey while helping physicians and scientists better understand rare diseases and human physiology, said Rachel Ramoni, former executive director of the network, which is based at Harvard University.

Researchers throughout the network use advanced medical technology. For example, to study patients’ gene expression and disease progression, they can make models using nearly transparent zebrafish, whose genetic structure is similar to that of humans. And scientists can conduct whole genome sequencing, which allows the medical team to read a patient’s DNA and identify changes that can reveal what may be causing a disease. 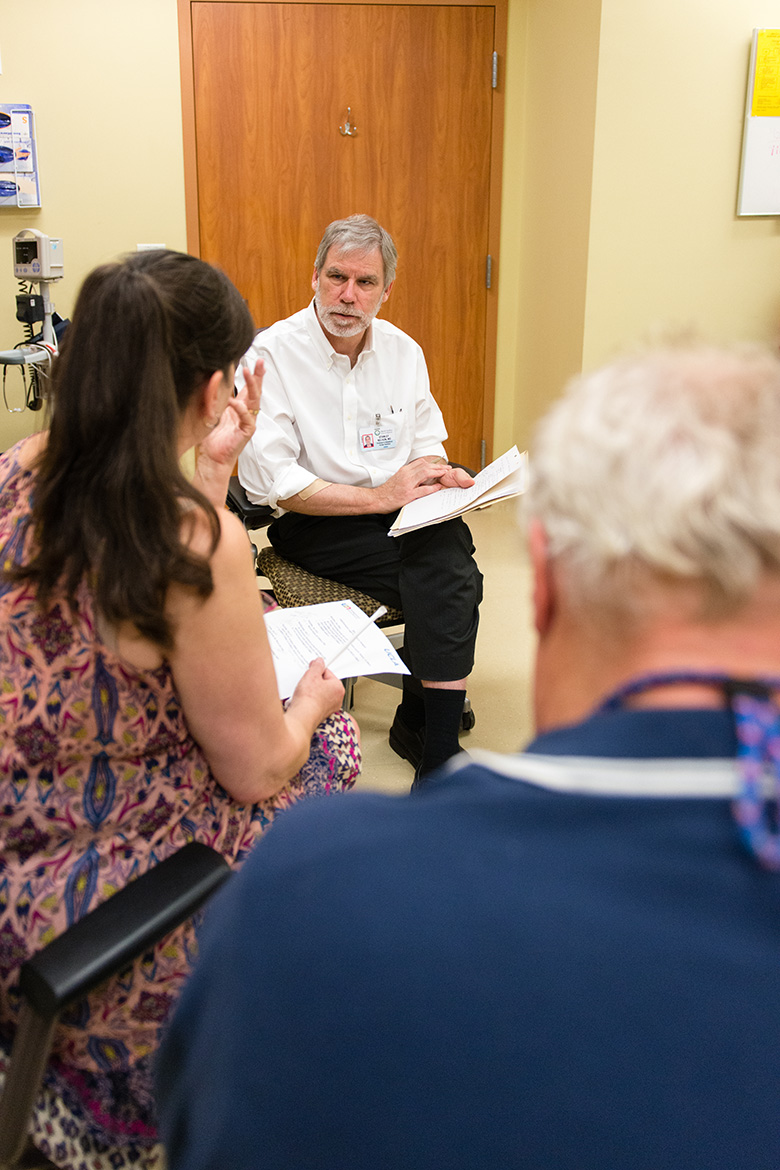 “We have powerful techniques to look at every gene that is being expressed as well as every gene that is inherited,” said Stanley Nelson, one of UCLA’s principal investigators and the lead doctor on Andrew’s case. “This is an example of true precision medicine.”

Nelson said the network can examine all known genes — not just the ones believed to have mutations that cause diseases. Doing that can lead to the discovery of new illnesses.

“Part of what we have to do is keep building that library, that encyclopedia of what gene and what gene mutations cause what symptoms,” Nelson said. “It’s just incomplete at this moment.”

Already the work is helping patients and their families come to terms with their illnesses. In one case, at Stanford, a toddler was diagnosed with two rare diseases, including a connective tissue disorder called Marfan Syndrome, after doctors conducted a form of sequencing that looks for changes in coded genetic segments known as exons.

Sometimes answers come from something decidedly lower-tech: collaboration among clinicians and researchers who share experiences, data and expertise.

“A lot of times your ability to be diagnosed depends on who is in the room,” Ramoni said. “And what we are doing with the network is we are expanding exponentially the number of people in the room.”

Doctors at one institution might think their patient is a unique case, only to learn that colleagues elsewhere have a patient with a similar illness. But even when diseases are diagnosed or gene mutations are discovered, treatments may still not be available.

Andrew Whittaker’s odyssey began one afternoon at age 19, when he started trembling and couldn’t speak. Doctors suspected he was suffering from anxiety and prescribed medication to control it. But Andrew said he continued to have “episodes,” during which everything just went blank.

“It’s like there’s not enough blood going to your brain,” he said. “You can’t think.”

Andrew also started losing his balance and falling off his bicycle. The family visited several hospitals. Doctors discovered that the receptors in his brain were malfunctioning and that he lacked sufficient dopamine, a chemical compound in the body responsible for transmitting signals between nerve cells. As a result, Andrew has some symptoms similar to those of Parkinson’s disease. Doctors also confirmed he was having seizures.

Still, Andrew’s symptoms didn’t add up to any known disease.

One afternoon last fall at precisely noon, as Andrew sat propped up on the living room couch, Lynn’s phone alarm sounded, signaling it was time for his medication. Lynn pried open Andrew’s hand, which was clenched into a fist, and dropped in the pills.

To keep Andrew from falling, the family has lowered his bed and removed carpet from the house. They also bought him a wheelchair. Their precautions don’t always work. One morning, Lynn was in the kitchen when she heard a crash. “I ran in there and he’s laid flat on his back,” she said. 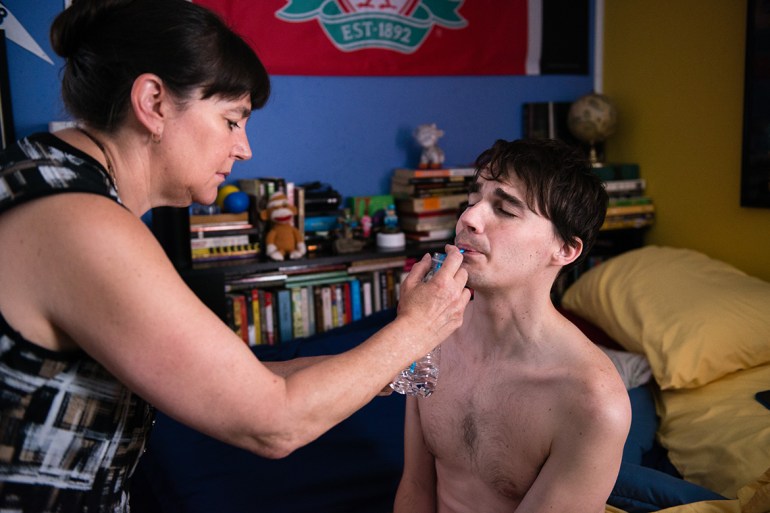 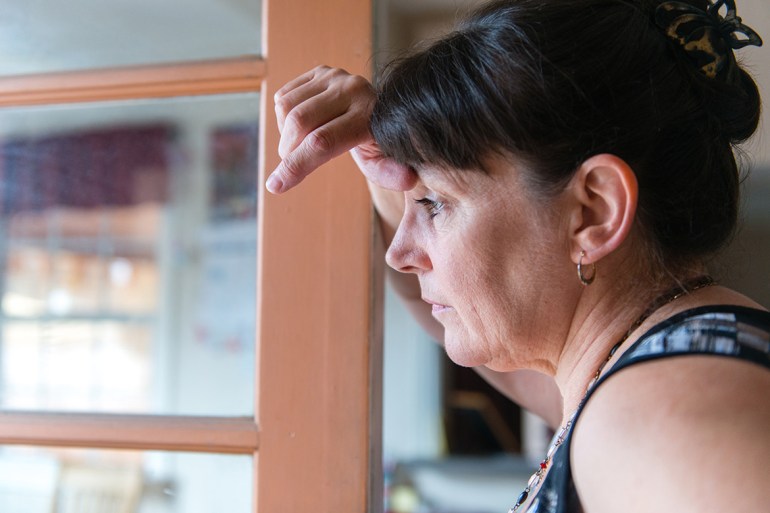 Lynn says not knowing what is causing her son’s disease is devastating. “We don’t know what we are dealing with,” she says. “We just know it’s worsening ... and it’s like somebody ripping your insides out.” (Heidi de Marco/KHN)

Andrew is close to his mom. But he also gets frustrated. He can’t shower or dress without her help. He’s had to give up the things he loved to do: printing T-shirts. Skateboarding. Shooting short films. He’s lost friends and can’t imagine dating anymore.

“Girlfriends? Forget about it,” he said, his face twitching as he talks. “They want a guy who can do stuff for them, not the other way around.”

On a Monday morning in late January, Andrew and his parents were in an exam room at UCLA. Lynn teased her son, saying she was going to put him in a freezer until doctors figured out what was wrong.

“Then we’ll pull you back out again,” she said, smiling.

Nelson, Andrew’s main doctor, walked into the room. He told Andrew he’d read through the medical records. “We’re going to try to figure you out.”

The work Nelson does is personal. His teenage son, Dylan, has Duchenne muscular dystrophy, a genetic disorder that causes muscle degeneration and weakness. Nelson knows his son’s disease will eventually take his life, but he said having a diagnosis makes all the difference.

“My heart very much goes out to the families that don’t even get an adequate diagnosis,” he said.

Nelson suspects that Andrew’s disease is genetic as well.

He asked the Whittakers to describe their son’s journey, then he conducted a short physical exam, asking Andrew to push against his hand and touch his own nose. Andrew trembled and his shoulders tensed, but he did it.

The rest of the week, Andrew underwent several other diagnostic tests, including a muscle biopsy, an EEG, MRI and a lumbar puncture. He remained upbeat, though running the medical gauntlet clearly wore him out. He also met with UCLA specialists in brain degeneration and muscle and nerve disorders. 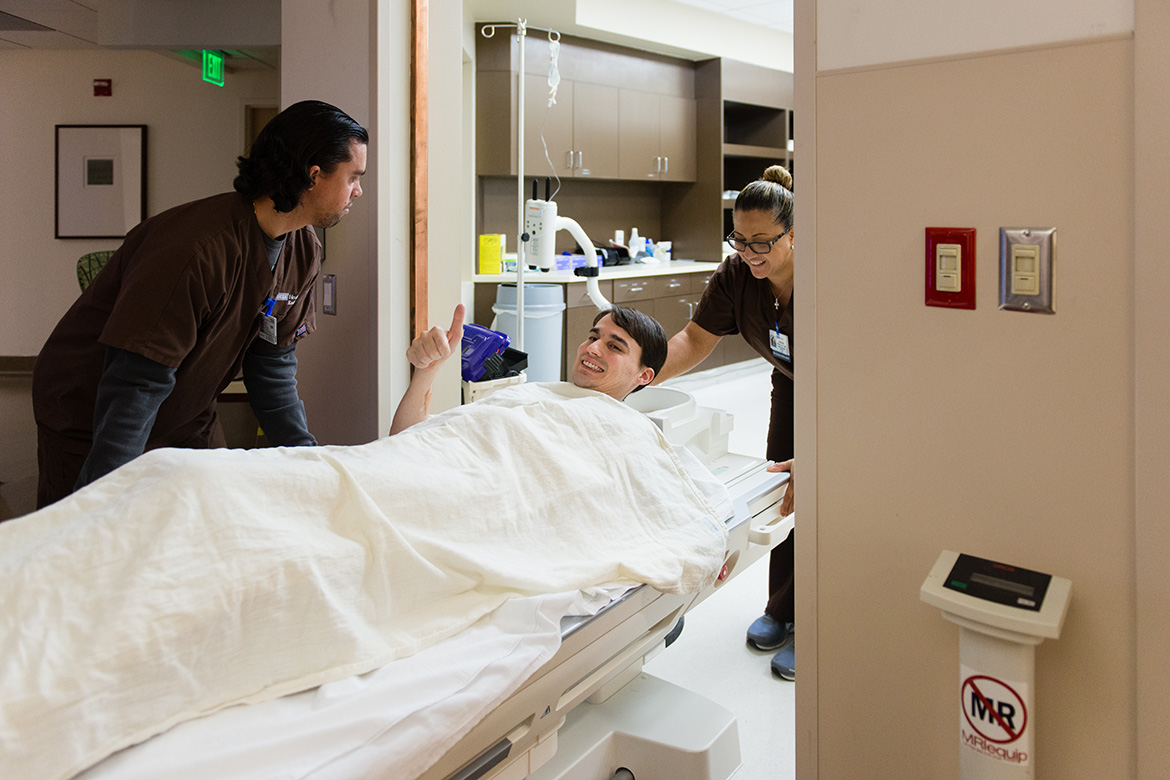 Andrew gets an MRI at the UCLA MRI Research Center in January. (Heidi de Marco/KHN)

At week’s end, Nelson sat down with the family to explain what he’d found. He had reviewed Andrew’s genome and compared it with that of both parents. Andrew had one copy of a defective gene that leads to Parkinson’s but the genome sequencing didn’t show a second copy, without which it could not be Parkinson’s.

He explained that Andrew’s illness was clearly progressive and that his brain was shrinking, making it harder for him to process language and information. Nelson said he still didn’t have a diagnosis — he believed it was a brand-new disease.

Nelson planned to continue poring over the test results, conducting additional exams and communicating with others in the network. He also is analyzing Andrew’s muscle tissue, skin and blood to see whether any mutated gene is expressed abnormally.

Even in the absence of a clear diagnosis, Nelson said, rare diseases like Andrew’s help educate scientists and may help other patients. “These are the people we as a society will owe a great debt of gratitude,” he said. “They are effectively donating their lives to this process.”

Lynn Whittaker was disappointed. “We are still left with just hope that they will come up with something,” she lamented. “What else do we have?”

Andrew said his relatives have asked if he’s scared the doctors will find something. “I’m more scared if they don’t,” he replied.