Hours after the Supreme Court upheld President Barack Obama’s health law on Thursday, but made its Medicaid expansion optional, senior White House officials were asked by a reporter how they would entice states to participate. 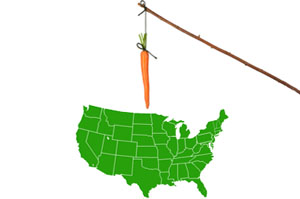 They laughed. It seemed almost inconceivable to them that states would opt out.  After all, the federal government will be paying the entire bill for three years for the expanded health insurance program for the poor, from 2014 to 2017, and then picking up at least 90 percent of the costs after that.

But a growing number of Republican lawmakers and state Medicaid officials, including those in Florida, Texas and at least seven other Republican-leaning states, have said they may indeed walk away from the nearly $1 trillion federal pot –putting at risk the administration’s plans to cover up to 17 million people, or more than half the total expected to gain coverage under the law.

While politics is a factor, states have legitimate budget concerns, said Matt Salo, executive director of the National Association of Medicaid Directors. Many state officials are already struggling to pay for the entitlement program, which typically is the largest or second largest state expense. Their future share may sound small, but it represents billions in new spending that could require cutbacks of other more popular programs, such as education or transportation, or else raising taxes. “Downstream there is exposure for uncontrollable costs,” he said.

The Congressional Budget Office projected that states would pay approximately $73 billion, or 7 percent of the cost of the Medicaid expansion between 2014 and 2022, while the federal government pays $931 billion, or 93 percent.

Salo and others also dispute the notion the program is “free” in the early years, saying that startup costs and the likelihood that millions of people currently eligible for Medicaid, but not enrolled, will come forward as a result of publicity about the expansion, is sure to drive up states’ expenses.

For those people, states will receive their traditional federal funding match, averaging 57 percent. Officials are also worried that a future, deficit-focused Congress will scale back the federal share, leaving states on the hook for a much greater share of the entitlement program.

States may try to negotiate smaller expansions that leave them less exposed in the future, but it’s unclear whether the White House would go along.

Texas Would Pay $27 Billion Over Decade

Take Texas, which has the nation’s highest rate of uninsured –with more than one in four of its residents under 65 without insurance.  Under the law, the state would be in line for $164 billion in federal dollars over a decade to cover an additional 2 million people through Medicaid, according to state estimates. But state officials, who this year underfunded Medicaid by billions to balance their budget, estimate their own share at $27 billion over that time.

“At this moment, Texas would be very hesitant to expand the Medicaid rolls,” said state Rep. Lois Kolkhorst, R-Brenham, chair of the House Public Health Committee, told the Houston Chronicle.

Charles Begley, professor of management, policy and community health at the University of Texas, predicts Lone Star officials will try to negotiate a smaller expansion, perhaps up to 90 percent of the poverty level, rather than the 133 percent called for in the law.

“The GOP in Texas will say we can’t fund the current Medicaid program, and they won’t want to spend more money on the program than it has to,” he said.

But hospitals, doctors and insurers are likely to bring strong pressure on them to accept at least some of the expansion, he said. Providers want the expansion to help pay for their treatment of the uninsured. Insurers want it because states are increasingly shifting Medicaid enrollees into private managed care plans which they operate.

The White House will likely try to leverage that pressure. Chief of Staff Jack Lew said Sunday on This Week With George Stephanopolous that he expects “the vast majority of states” to expand Medicaid.  “For those few that are slow to come in, they’re going to have to answer to people why they’re turning this down and why they’re letting people go without coverage.”

State officials retort that the notion that expansion is free for states until 2017 is “a big lie,” in Salo’s words. While the federal government will pay many of the administrative costs, states will share in the expense of some information technology and personnel. And the requirement that most individuals carry insurance is expected to spur at least some of an estimated 13 million people who currently qualify for Medicaid, but are not enrolled to sign up, Salo said. States will receive their traditional federal funding match for those people.

“As it stands now, there’s no way we can afford to do it,” said Tony Keck, South Carolina’s Medicaid director.

Beyond that, Keck said there’s little incentive “to pour more money into a broken system,” which he argued does little to hold down costs or improve the health of the poor.

Keck estimated the expansion of Medicaid would add 500,000 people to the rolls in South Carolina at a cost to the state of as much as $2.4 billion over 10 years.

He acknowledged that cost predictions are uncertain, however, since it is unclear how many might enroll, especially since some lower-income people will be exempt from the mandate to carry insurance.

States Also Face Costs If They Opt Out

The law’s supporters argue that states will pay a cost for not expanding Medicaid. They will likely have to pay more to hospitals and other providers to compensate them for caring for patients without coverage, said Jocelyn Guyer, co-executive director of the Center for Children and Families at Georgetown University.

Another factor Guyer believes will drive participation is the reduction of Medicaid funding to hospitals that care for the uninsured starting in 2014. The assumption was they would not need the help because fewer people would be uninsured, she said.

That will also spur providers that care for the uninsured to lobby state lawmakers to expand Medicaid, she said

Don Berwick, who until December was the administrator of the federal Centers for Medicare and Medicaid services, argued that  states would be shortsighted not to participate.

“It does not make sense morally or economically to leave a person out of the health system,” he said. “That can lead to human suffering and increase costs for states.”

Some state officials worry it is shortsighted to go along with the plan at a time of looming federal deficits when a future Congress could decide to scale back federal funding, leaving states to pay a bigger share.

State Sen. Richard Rosen, co-chairman of the Maine Senate appropriations committee, notes that federal lawmakers channeled additional money for the program in the 2009 stimulus package only to take it away in 2011.

“Living with those gyrations makes me cautious about any expansion,” he said.

Rosen said he’d be more inclined to expand Medicaid if the Obama administration granted states more flexibility, so they had more power to determine benefits and how they pay providers.

“That would go a long way to addressing out concerns to take on a greater population,” he said.