The end of federal stimulus spending is going to mean nothing but pain for state Medicaid programs in fiscal 2012.

State Medicaid spending is projected to grow by an average of 29 percent in the budget year that began July 1, the biggest increase in the history of the federal-state health insurance program for the poor and disabled, according to a report released Thursday. 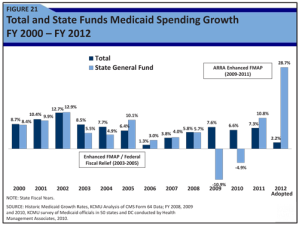 The recession drove up Medicaid enrollment sharply, but the federal government stepped in with extra funds beyond its usual share to help states cover the costs. Now, states are scrambling to make up for the end of billions of dollars in federal stimulus funding that helped sustain the program from March 2009 through June 2011. The huge jump in their Medicaid costs should prove temporary, assuming that the economy continues to improve. Typically, state Medicaid spending rises 5 percent to 10 percent annually.

Both the 2009 economic stimulus law, which provided an additional $87 billion in federal funding for Medicaid, and the 2010 federal health overhaul prohibited states from tightening eligibility requirements. So states have had to look elsewhere for cuts to make up for the loss of the extra federal funds.

To counter the cost surge in Medicaid, which covers 60 million people and typically accounts for a quarter of state budgets, nearly every state is either reducing benefits, cutting fees to doctors and hospitals, or both, according to the report by the Kaiser Family Foundation’s Commission on Medicaid and the Uninsured. (KHN is an editorially independent program of the foundation).

“This is a huge challenge for states, particularly with the demands on their already limited administrative resources,” said Robin Rudowitz, associate director of Kaiser’s commission.

Diane Rowland, executive vice president of the foundation and the commission’s executive director, said the combination of two recessions since 2001 “and a decade of constrained spending has left no cushion, and many of the latest cuts will hit at the core of the Medicaid program.”

Although states are bearing a bigger share of the Medicaid burden this year than they have in the recent past, overall Medicaid spending (state and federal dollars) is projected to grow by only 2.2 percent, the lowest amount since 2006, the Kaiser report said. That is because the stimulus funding ended, and program costs are stabilizing as the national economy shows tentative signs of recovery and enrollment growth slows.

To get through the current budgetary crunch, here’s some of what states are doing to control costs, according to the 11th consecutive Kaiser survey of state Medicaid directors:

Although Medicaid enrollment growth has slowed this year, an estimated 16 million more people will be covered under the program starting in 2014 as a result of the 2010 Affordable Care Act.  A new study by Harvard School of Public Health researchers published in the journal Health Affairs suggests that figure could actually range from a low of 8.5 million to a high of 22.4 million. 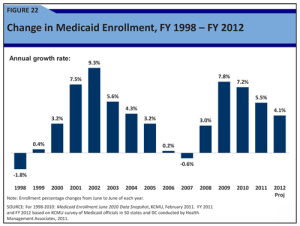 The federal government will pick up 100 percent of costs for these newly eligible recipients initially, decreasing to 90 percent in 2020.

The 26 states challenging the constitutionality of the federal health law in Florida v. HHS  have argued that the Medicaid expansion places an unfair burden on them.

Today, the federal government pays on average 56 percent of Medicaid costs, though its share is higher in the poorest states.

Enrollment in Medicaid has grown rapidly since 2006 as the economy unraveled and millions of people lost their jobs and their health benefits. But the pace slowed in fiscal 2011, when enrollment rose 5.5 percent; states project a 4.1 percent enrollment increase in 2012, the report said.

Darin Gordon, Tennessee’s Medicaid director and vice president of the National Association of Medicaid Directors, said tax revenues are up in his state but not enough to keep up with rising Medicaid costs. “Things are not in an ideal state, as the state is still trying to climb out of a hole, but we are seeing some modest revenue growth,” he said.

He said when federal stimulus money went away, the state took money it had diverted to other state programs the past two years and allotted it to Medicaid.

While the financial picture is brightening, Gordon worries the congressional super committee will suggest major cuts in Medicaid. “Medicaid is very much on the table,” he said.

Jordan Rau contributed to this article.