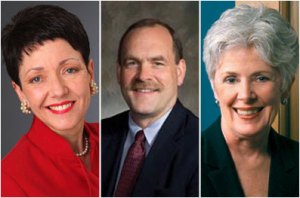 States regulate health insurance, although they vary widely on the minimum level of coverage they require of insurers and financial solvency requirements. More than half the states allow insurers to implement rate increases without first obtaining state approval.

Ario said if states and the federal government try to share the responsibility it could pose a problem because it would be unclear who has the ultimate authority. “It could end up as a ‘who’s on first and what’s on second’ problem,” he said.

He was appointed by Democratic Gov. Edward Rendell. Holland, a Democrat, and Praeger, a Republican and former president of the National Association of Insurance Commissioners, were both elected.

Obama’s proposal to create a Health Insurance Rate Authority was included in his 11-page health plan that attempts to merge the health bills passed by the House and Senate last year and restart legislative efforts to pass overhaul legislation. His proposal said the authority would “provide needed oversight at the federal level and help states determine how rate review will be enforced and monitor insurance market behavior.”

Under the plan, “if a rate increase is unreasonable and unjustified, health insurers must lower premiums, provide rebates, or take other actions to make premiums affordable,” the proposal said.

Obama’s plan lacked details about how the federal rate authority would work, or for how long. Under the House and Senate health bills, individual health insurance would be sold through exchanges, marketplaces that would set standards for plans and oversee rates. The president’s plan sided with the Senate version that calls for state-based exchanges instead of one large national exchange as in the House bill. The exchanges would not start until 2013.

The new federal authority goes beyond what’s contained in either the Senate or House bills. In the past two weeks, Obama administration officials have tried to build public outrage over recent insurance rate hikes in the individual health insurance market, especially a 39 percent increase sought by Anthem Blue Cross of California, the largest for-profit health insurer in that state. Last week, the insurer agreed to postpone the increases until May 1.

Efforts to pass legislation stalled a month ago after the Democrats lost their filibuster-proof majority in the Senate with the election of Massachusetts Sen. Scott Brown, a Republican.

America’s Health Insurance Plans, the health insurers’ major lobbying group, said Monday the White House is spending too much time focusing on premium increases in the individual insurance market, which affects seven percent of those with private coverage. The group said blocking rate increases doesn’t do anything to resolve their underlying cause: rising medical costs and increased use of medical services.

The Blue Cross and Blue Shield Association said, “This new agency, which creates a highly politicized federal review process, would divorce premium review from the state regulators’ responsibility of assuring that health plans have enough funds to pay future policyholder claims, potentially leading to multi-plan insolvencies across the country.”

Holland defended state regulation of insurance. “Health insurance is very localized and states already have a number of tools to monitor rates,” she said. “Overall, I think state regulators do a good job.”