FORT COLLINS, Colo. — When Pavel Poliakov’s small clothing shop in this picturesque college town closed last year, he felt lucky to be able to sign up for Medicaid just as Colorado expanded the program under President Barack Obama’s health law.

But when Poliakov developed such a severe toothache that he couldn’t eat on one side of his mouth, he was unable to find a dentist — even though Colorado had just extended dental benefits to adults on Medicaid.  Eventually, he turned to a county taxpayer-supported clinic that holds a monthly lottery for new patients.

Poliakov, 40, was a three-time lottery loser before his name was chosen in September.  “It was horrible” living with the pain so long, he said as the second of his seven cavities was filled at the dental clinic run by the Health District of Northern Larimer County. 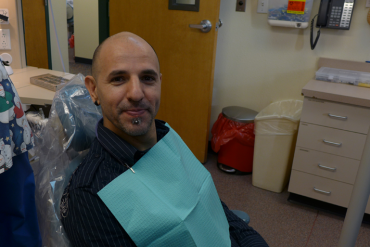 After snagging an appointment through a monthly lottery, Pavel Poliakov waits to see a dentist at the Health District of Northern Larimer County clinic in Fort Collins, Colo. (Photo: Phil Galewitz/Kaiser Health News)

Colorado was one of five states last year to begin offering routine dental coverage to millions of low-income adults in Medicaid — an unprecedented expansion. But like Poliakov, many have had trouble finding dentists willing to treat them because of Medicaid’s low reimbursements, according to providers, advocates and patients.

The upshot is that many Medicaid enrollees continue to live with the pain and discomfort of tooth decay and gum disease, which can exacerbate other health problems, such as heart disease, diabetes and rheumatoid arthritis. Eventually, some go to costly emergency rooms, which can do little but provide short-term pain relief.

“Translating Medicaid coverage into care is a significant problem,” said David Jordan, who directs the dental access project at Community Catalyst, a national consumer advocacy group based in Boston.

“The number of adults on Medicaid who are able to see a dentist is woefully short of where it needs to be.”

Many dentists are reluctant to participate in the government program for low-income Americans because it typically pays as little as half of what they get from patients with private insurance. For example, Medicaid in Colorado pays $87 for a filling on a back tooth and $435 for a crown, compared to the $150 and $800 that private patients typically pay.

In addition to Colorado, California, Illinois and Washington added or restored adult dental benefits last year as they expanded Medicaid eligibility under the health law to those making up to 138 percent of the federal poverty level. The federal government pays the full cost of expansion through 2016, and then no less than 90 percent. The fifth state, South Carolina did not expand Medicaid eligibility, but added adult dental services to improve benefits.

Yet advocates in all five states say providers are struggling to keep up with demand.

“Getting oral health care is difficult, if not impossible, for many of Colorado’s Medicaid clients,” said a report released this month by the nonpartisan Colorado Health Institute, a health policy research organization.  The study found that in the past year, the number of Coloradans eligible for Medicaid dental coverage, including children, tripled to nearly 1 million, while the number of dentists who say they treat Medicaid patients increased by only 17 percent — to 877 practitioners.

Nationally, children on Medicaid also face a shortage of dentists willing to treat them, though the problem is typically not as severe.

Safety net providers in Colorado, such as federally funded community health centers, have tried to fill the gap, but in many places appointments for new patients are gone within hours of becoming available. Eight Colorado counties lack any dentists and seven more don’t have a private dentist who accepts Medicaid or a safety net clinic offering dental services, the study found. 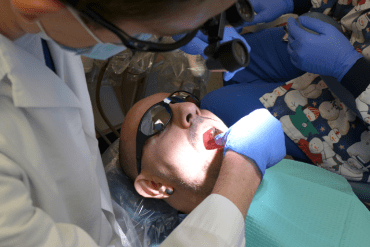 Colorado Medicaid officials say they have enough dentists in most places. “We’ve not had calls from legislators or stakeholders that we flat out can’t get people into dental services,” said Bill Heller, director of the state’s Medicaid dental program.

Still, the state last summer proposed paying dentists a $1,000 bonus for taking five new Medicaid clients and seeing them at least twice a year. But the Obama administration has yet to approve federal incentive money

With little political support to increase reimbursements to dentists, advocates have looked at other ways to boost care. The Colorado Dental Association has urged members to take new Medicaid dental patients to alleviate waits, but it’s unclear how many have done so.

Seeking other alternatives, Alaska and Minnesota have enacted regulations that allow dental therapists with two years of training to perform basic services, such as filling cavities, if they work under a dentist’s supervision. The therapists in those states are much more willing to see Medicaid patients.

But efforts to expand their use in other states have been opposed by the American Dental Association, which raises questions about patient safety.  Dental therapist legislation is pending in Washington and South Carolina, along with several other states.

Meanwhile, patients with Medicaid continue to struggle to get care.

Christina Peters, of the Washington Children’s Health Alliance, said only about 15 percent of adult Medicaid enrollees in that state received dental care last year after the benefit began.

In Hartsville, S.C., CareSouth , a community health center, has one dentist who’s seen 60 new dental patients in the past month— but more than 400 have sought care.

Alfredo Rodriguez, 51, a Longmont, Colo. landscaper, visited a dentist at the Salud Family Health Center in February with several loose and broken front teeth that made it hard to eat. “I’m so thankful to be here,” he said while waiting to get three teeth pulled and to be fitted for a partial denture.

The North Larimer County Health District dental clinic gets between 150 and 300 people entering its lottery each month, hoping to qualify for 50 or 60 slots.  Over half the clinic’s 5,000 patients are on Medicaid.

Rob Gartland, a clinic dentist, says the value of Medicaid is that patients can afford more expensive procedures, such as crowns and root canals, rather than just extractions.

In Fort Collins at least, Medicaid patients will soon get more help when Salud’s clinic here adds a dentist later this winter.

Sitting in the center’s waiting area recently, Tiffany Rickman, 23, said she would definitely use the service. She says she feels pain every time she eats, but has been unable to get care. “I would really like to get into a dentist and have a place where I can be a regular patient,” she said.