PAWTUCKET, R.I. — Dustin French, 29, had four drug overdoses in the span of a year. “I was dead on arrival to the hospital,” he said of his last heroin overdose, which happened in April. “I woke up … and I didn’t feel like myself. I could tell this time I was really dead.”

He credits his turnaround to a relationship he launched in the emergency department with a “peer recovery specialist” — someone who had herself struggled with addiction. She was there, he said, “when nobody else was.”

Stories like French’s have led policymakers — here in Rhode Island and in other states — to embrace a road to recovery led by people who have traveled it. It’s a growing effort to address the nation’s burgeoning opioid epidemic.

Here’s how the idea, still in its infancy, works: During overdose patients’ emergency department stays, they are introduced to a “peer recovery coach.” Patients trust these coaches, with whom they share common experiences. Coaches then stay in touch after discharge, meeting patients regularly to help navigate the path toward sobriety and resolve issues such as housing, food stamp applications, court obligations or job searches.

The model is gaining traction because millions of Americans are estimated to abuse opioids, an epidemic that’s behind billions of dollars in hospitalization costs. States want to train these workers, fund them and integrate them into the health system. Even so, they have to cross numerous logistical hurdles if they want the strategy to pay off.

So far, French has received active follow-up care, both from his coach and from AnchorED, the organization that operates Rhode Island’s peer recovery program.

Now, he has a job cleaning kitchen equipment. He is studying for his commercial driver’s license.

“Anything I needed, she was always there,” he said of his coach. “That program saved my life.” 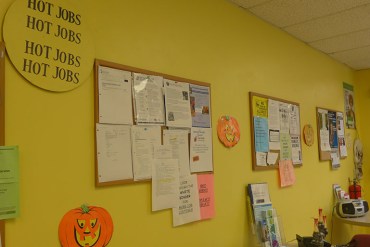 The Anchor bulletin board includes postings with information on job openings, educational opportunities and other support meetings and wellness programs the center offers — for instance, recovery programs focused on veterans, or yoga classes. (Shefali Luthra/KHN)

Rhode Island – where, since 2009, more than 1,000 people have died from painkiller or heroin overdoses — is taking a lead. This summer, the state committed to assigning a peer coach to every hospital emergency department and footing the bill. Other states, such as New York, New Jersey, Wisconsin, Maryland, Pennsylvania, Massachusetts and Delaware, are experimenting with ways to place and pay for peer coaches in their ERs, though programs vary in size and evolution. The National Governors Association has also come out in favor of the mode.

States hope to keep patients healthier and improve their own finances. The cost of a phone call with a peer coach, the logic goes, is less than that of a return trip to the ER. Many addiction patients are covered by Medicaid, the federal-state health plan for low-income people.

But it’s a gamble to see whether lay people — whose main asset is that shared experience with patients — could be part of the secret sauce to curbing painkiller and heroin abuse. And challenges persist. These include getting more insurance plans to cover the service and devising payment structures in which they can easily do that; certifying and training peers; and the big one, finding definitive evidence that the peer coaches help.

“There is barely any research,” noted Dr. Manish Sapra, associate chief of clinical affairs, network hospitals and affiliates for Western Psychiatric Institute and Clinic of the University of Pittsburgh Medical Center, which has a peer recovery pilot program. Despite growing interest, “there are no randomized controlled trials to show peer recovery efforts or peer support have as big an effect as what we’re hoping.”

Intuitively, it makes sense. Peers who have navigated addiction are more relatable, experts said. They can spend an hour with patients, compared to the emergency doctor who, on a hectic Friday night, may only have a few minutes to discuss treatment. And, perhaps most importantly, they offer living proof that recovery is possible.

“When you’re struggling through this issue — however you got there — you often feel like there’s no hope, there’s no end to this and you’re alone,” said Dale Klatzker, president of The Providence Center, which operates AnchorED.

But if advocates want this model to stick, they need to prove peers provide more than just comfort. States want to know the service actually improves health outcomes for people with addiction. Insurers want to know they will save money if they cover this coaching model and the related services, such as helping clients in court or accompanying them to therapy.

That’s why Maryland, which is working to expand its state-sponsored program, is starting to collect data on whether patients improve and what services the counselors help them get. The state hopes to track whether this intervention is cost-effective, by cutting the number of patients who return to the emergency room. Similar research is underway in Rhode Island and Massachusetts.

“Producing robust research to support [its] effectiveness … is critical,” said Colleen Barry, a professor of health policy at Johns Hopkins University, who co-directs its Center for Mental Health and Addiction Policy Research. 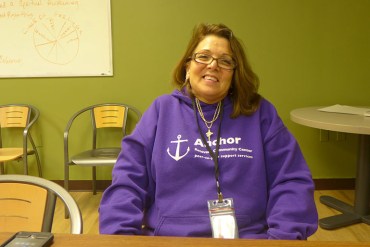 Donna Price, 57, has been a peer recovery specialist at Anchor for just over a year. She has been in recovery for heroin abuse for about 20 years, she said. Now, she’s one of the coaches who visits overdose patients at local emergency departments. (Shefali Luthra/KHN)

And there are other hurdles. States have to figure out how to credential coaches. Some are developing certification programs that including training in motivational interviewing, navigating community resources, building rapport and understanding how addiction and recovery work.

Part of the challenge is ensuring counselors meet certain standards without making them seem less authentic and relatable to patients — like a junior clinician. Many hospitals also have strict rules about whether their employees can have a criminal background, which further limits the pool.

“We want to hire people with lived [addiction] experience, and the reality is most people with that will have a criminal record,” Dr. Sarah Wakeman, medical director of the substance use disorder initiative at Massachusetts General Hospital’s Center for Community Health Improvement, which has piloted the model.

Recruiting is another issue. In Rhode Island, AnchorED employs about 22 peers to serve the state. Each has a caseload of maybe 40 clients at once. But that hardly meets the need, said George O’Toole, who manages the peer recovery program. And that’s in a small state, with about a dozen hospitals. Other states trying to emulate the model have to scale up.

Meanwhile, the counselors also need to be established in their own recovery and be willing to work in the program, which can be emotionally taxing and time-consuming.

And then patients don’t always buy in, warned Dr. Gary Bubly, medical director for the Miriam Hospital Emergency Department in Providence. His department has “heavily used” peer coaches. The symptoms of withdrawal can be so unpleasant that, even after an overdose, patients may reject any treatment path.

But the potential outweighs these complications, advocates said. “If there is one thing I can look at in my career and say, ‘That was a good thing,’ — this will be it,” said Rebecca Boss, Rhode Island’s acting director of behavioral healthcare, developmental disabilities and hospitals. She helped develop the program.