Getting on Medicaid has never been so easy.

In the past two years, 31 states and the District of Columbia have expanded eligibility for Medicaid under the Affordable Care Act, but even more have simplified sign-ups and renewals, according to a 50-state survey released Thursday.

For example, 49 states this year take applications for Medicaid by telephone, up from 15 in 2013, reports the Kaiser Family Foundation. (KHN is an editorially independent program of the Foundation.) All but one state now takes online applications, up from 37 in 2013. Previously, many states often required applicants to complete paper applications or apply in person, leading to weeks of processing time.

Wider eligibility in most states — combined with easier enrollment options — helps explain why the number of people in Medicaid is at an all-time high of nearly 72 million people, up by more than 13 million people in past two years, according to the latest tally by the Centers for Medicare & Medicaid Services. The health law allows states to expand Medicaid eligibility to most people earning up to 138 percent of the federal poverty level, which is about $16,200 for an individual.

States that expanded Medicaid have seen enrollment surge by 31 percent since 2013. But growth has averaged 10 percent even in states that did not expand. Typically Medicaid enrollment falls as the economy improves and unemployment drops because people gain jobs and health coverage.

The Kaiser report found that 43 states this year use electronic data from sources such as the Internal Revenue Service and the Social Security Administration to verify an applicant’s income before enrollment. That helps speed the application process. Forty-five states have implemented a health law provision giving hospitals authority to determine a patient’s temporary eligibility for Medicaid, another change that gets people covered faster.

“These steps makes it easier and faster for people to connect to coverage,” said Samantha Artiga, associate director of the Kaiser Commission on Medicaid and the Uninsured.

Another example of enrollment efficiency: 11 states said that a decision on enrollment is made in less than 24 hours for at least half their Medicaid applications. That does not include applications for frail elderly. 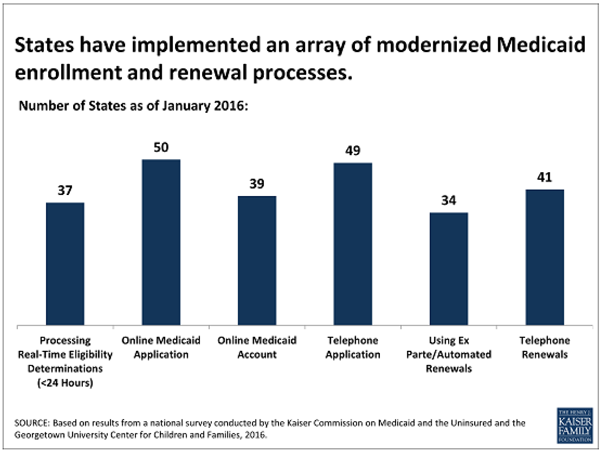