PEACHTREE CITY, Ga. – Richard Hasselbach and Deborah Kadlec met in a nursing home and dreamed of a life together outside its walls.

Their health conditions made living on their own a challenge: Hasselbach, 63, is disabled from a stroke and lost a leg to a blocked artery. Kadlec, 52, has multiple sclerosis. They both use wheelchairs and need help with chores such as bathing, cooking and remembering to take their medicines. Most of their relatives live in other states.

Despite those obstacles, Hasselbach and Kadlec got their own apartment and a personal care aide last summer through the help of a federally funded program run by the state. The program, known as Money Follows the Person, is the nation’s most ambitious effort to move people out of nursing homes and other long-term-care facilities. It aims to help people live on their own and also save tens of millions of dollars for Medicaid, the state-federal health insurance program for the poor and disabled that pays for two-thirds of nursing home bills in the U.S.

Nationally, nursing home care averages about $75,190 per patient each year. Care in the home, through such services as meals-on-wheels and daily visits by a health aide, averages $18,000 a year, according to the AARP Public Policy Institute.

Interactive Map: Getting Out Of Nursing Homes

The program gives nursing home residents personal and financial help to live on their own or in small group settings, as well as payments for costs such as apartment security deposits, household furniture and alterations to make homes or cars accessible to the handicapped.

Georgia is one of 29 states and the District of Columbia participating in Money Follows the Person. Its experience shows both early successes and an illustration of the program’s slow start nationwide. Georgia had hoped to move 1,312 people from nursing homes and other long-term-care facilities by 2011. But through the end of last year it has moved out only 221.

Congress established Money Follows the Person in 2005, and states set a combined goal of moving out more than 37,000 residents from nursing homes and other facilities by 2013. Most states, including Georgia, started their programs in 2008. Two years later, just 5,774 residents have moved nationally, according to state data collected by Kaiser Health News.

The new health overhaul signed into law last month extends the program to 2016, adds $900 million to what was a five-year, $1.3 billion initiative and loosens eligibility rules.

“The impact could be very significant,” said Debra Lipson, a senior researcher at Mathematica Policy Research, a Princeton, N.J. based think tank that is evaluating the program for the federal government. 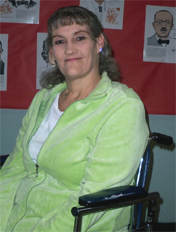 Christine McDaniel, 50, has been trying to move out of an Atlanta nursing home for about a year. “I didn’t come here to live. I came here to get better and I’m ready to move on,” said McDaniel, who has HIV and has been treated for hepatitis. (Phil Galewitz/KHN)

Most states are moving slowly for various reasons: problems finding affordable housing, resistance from nursing homes, stringent federal rules that limit who is eligible and what types of community settings they can move into, according to a recent study by Mathematica.

Alice Hogan, who heads the Money Follow the Person program in Georgia, said she considers the program a success. “Like most states, we wished things were going along faster but implementation has been more difficult than expected,” she said. “But personally I am not disappointed because I am very happy with those that we got out because each of them is a real person who is now in the community.”

– Texas has moved 2,029 people out of nursing homes and other long-term care facilities. That’s more than one-third of the national total.

– Illinois, which set the highest goal, is furthest from its target. The state had set 3,357 transitions as its goal by 2013, but through last year has done just 58. “Meeting that goal by 2013 appears nearly impossible,” said Jean Summerfield, the Illinois project director.

Many states blame their slow start on the program’s requirement that people live in nursing homes and other institutions for at least six months to qualify for transition assistance. State officials said those residents are hard to move because they often have the most complex medical conditions and have typically lost their home and family support system.

Congress last month lowered the requirement to a stay of three months that is paid by Medicaid.

In addition, the program’s rules bar participants from moving into group homes that house more than four people, which effectively shuts out most assisted-living options.

Georgia earlier this year cut its 2011 target by more than half to 618 people. Joye Burton, spokeswoman for the Georgia Community Health Department, said the updated goal is more realistic given early problems finding housing and arranging funding for community-based services.

While dozens of people have been helped by the program, advocates for the poor and disabled say the program’s slow start highlights the state’s lack of investment to help people live on their own.

“I’m discouraged,” says Ruby Moore, executive director of the Georgia Advocacy Office, a non-profit agency that works with the disabled. “We have a disproportionate number of people in nursing home facilities who do not need to be there.” 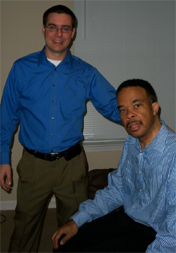 Jay Wright, a transition coordinator, helped find a home for Joe Morman, who had spent two years in an Atlanta nursing home. Morman has moved into an apartment in a gated community in Decatur, Ga. (Phil Galewitz/KHN)

Advocates for the disabled have pressed the state for years to improve its community-based services. A lawsuit filed against the state led to a landmark U.S. Supreme Court ruling in 1999 that “unnecessary institutionalization” is a form of discrimination. That decision had been expected to spur states to enhance home and community services to help people avoid nursing homes, but Moore says too little has changed.

“Cutting the benchmark in half has never been known to be a good strategy to improve performance,” Moore said.

The state has contracted with a private company, B&B Care Services, to handle the nursing home transitions. The firm’s employees visit nursing homes to identify residents who might be interested and work with family members and nursing homes to smooth the way.

One sign of the program’s value, according to Lynnette Bragg, CEO of B&B Care Services, is that of the 107 nursing home transitions, only 10 people have returned.

Jay Wright, a transition coordinator for B&B, helped find a home for Joe Morman, who had spent two years in an Atlanta nursing home after being hospitalized with an infection of the brain or spinal cord. Morman has moved into an apartment in a gated community in Decatur, Ga. The program paid his security deposit for the apartment and utilities, covered his moving expenses, bought him a bed, chair, dining room table, a microwave and even some food. And it arranged to get him a personal care aide eight hours a day to clean, cook and run errands.

But Bragg notes that many parts of the state don’t have public housing subsidies or appropriate housing options.

Christine McDaniel, 50, has been trying to move out of an Atlanta nursing home for about a year. “I didn’t come here to live. I came here to get better and I’m ready to move on,” said McDaniel, who has HIV and has been treated for hepatitis. Even though she qualified for a Medicaid waiver to help cover her cost of care, the program has had trouble finding her a place to live in Northwest Georgia  near her family — with her $675 a month Social Security check.

Nursing home officials say most of their residents are happy where they are. “The advocates feel like every person in a nursing home could go home and live successfully. That is not realistic,” says Norma Jean Morgan, CEO of Effingham Extended Care Center in Springfield, Ga. Yet she adds: “You do not want a person staying in an institution if he or she can be viable at home.”

The transition back home has not been seamless for Kadlec and Hasselbach. They’ve had trouble accessing public transportation and Kadlec is unable to maneuver her wheelchair to use the apartment shower. Still, neither wants to move back to the nursing home.

“I’m much happier here,” Hasselbach says, sitting by Kadlec in the living room of their one-bedroom apartment that overlooks a golf course in this leafy Atlanta suburb. “We’re free.”

Despite Federal Help, States Struggle To Move People Out Of Nursing Homes