Massachusetts is the first state to say that health care costs must stop increasing faster than that of most other goods and services. Prof. Stuart Altman, a Brandeis economist who advised President Richard Nixon on health policy and President Bill Clinton on Medicare, has responsibility for helping the state achieve that goal.

Gov. Deval Patrick recently named Altman to chair the Health Policy Commission, the new board overseeing the sweeping cost-control law. The board, whose other members were announced last week, will monitor progress toward keeping health care spending in line with state economic growth overall. While he’s “hopeful” the state can meet this goal, Altman notes that many attempts have failed over the years. WBUR’s Martha Bebinger spoke with Altman about the challenge. Here is an edited transcript of that interview:

How do you see this new role?

Massachusetts has put together the best kind of balanced program that I could think of in the country, where it is relying at one level on the many changes that are going on in the private sector. But it also has put together an overarching public assessment of what’s going on to make sure that it works, and it actually brings cost down without hurting quality. 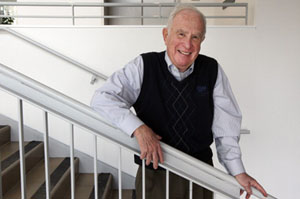 If the changes that are currently in place don’t do that, this commission is responsible for giving an early warning sign. So we don’t have direct regulatory power to force the system to change, but we do have a monitoring role to make sure that it is working. If it’s not, [we would] first direct the delivery system and the payers to change, and if that doesn’t work, we could also recommend back to the legislature that the state needs more authority.

What is your sense going in about whether things will proceed without too much intervention, or whether you will need to be directive?

On one level I’m pretty optimistic. The level of changes that are occurring in the state are really very substantial. And I would say that the delivery systems, including our very big delivery systems, they really are seriously trying to restructure to live within a tighter budget than they had in the past. And the payers too — Blue Cross, Tufts and Harvard also — are tightening up the reins and not giving big increases.

But I’ve been around a long time and I’ve seen other years and other decades when after a while the cost-containment mechanisms in place began to fall apart, and did fall apart. So while I’m going into this quite optimistic, I also have a degree of skepticism so I’m going to be watching it pretty closely.

You have seen interest in reining in costs wax and wane. How do you rank this period?

If we look back in history we had very strong government regulation environment in the early and middle 1970s, actually put forward by a Republican administration. It looked like the government was going to be a very strong regulator of growing health care spending.  We had wage and price controls from ’71 to ’74.  We created health planning agencies all over the country. We had tough certificate-of-need laws.

And then as we move through the ’70s we gradually dismantled it all and by the end of the ’70s, it was all gone. Then we had a very brief period when the providers had what we called a “voluntary effort” to control their spending. All that fell apart and we had the biggest growth in our history in the 1980s.

Then we introduced managed care, which was extremely effective in slowing the growth in spending, but it was perceived by the patients — and the beneficiaries and the press — as a system that was holding back access and quality. We had this strong backlash and we essentially destroyed managed care by the end of the ‘90s. So I’ve seen both the private sector fall apart and the government sector fall apart.

Now, I think what’s being done is smarter, and not quite as aggressive as the ‘90s, which I think is a good thing. If you’re too aggressive you’re going to get a lot of backlash too quickly. So I give it a higher probability of success than either the ‘90s or the ‘70s, and I am hopeful.

Ultimately the constraints begin to hurt certain segments of the provider community, [and they] begin to put out statements to the patients that they’re being denied needed care and we begin to develop a new backlash. So I think patients need to be part of this equation and we need to be balancing their needs with the people that pay the bills, so that’s one side.

For patients, are things moving along now in terms of communicating clearly with patients as you think they should?

No. I don’t think patients really understand these limited networks and tiered networks and ACOs and the like. I think there needs to be an expanded consumer education program. Also I think we need to do it smarter. You don’t force a patient into any one delivery system, you just make it more expensive if they jump out of one to the other, which continues to gives them the choice. What happened in the ‘90s is that often they had no choice, they had to be at a particular network and they couldn’t jump out.

So I think we’ve learned something in the last 20 years. If we’re going to ask organizations to have responsibility for total spending of a particular patient population, [the patients] need to know they’re in a particular group, but they also need to have the flexibility if for some reason they want to get out. I think we need to better educate our consumers and patients, but I think we’ve also learned from the ‘90s, so I’m hopeful.