Patricia Becerril comes to Bethesda Health Center in Charlotte, North Carolina, every other week. And it’s a slog.

“It takes her two hours to get here,” said Katherine Wilkin, a University of North Carolina at Charlotte master’s student, translating for Becerril. “She takes two buses, so coming here, she’s definitely devoted to getting this treatment. She comes every time.”

“With therapy, she’s gotten able to organize her thoughts and feelings, and she feels better, not frustrated, less stress,” Wilkin said.

Becerril initially came to this free clinic for diabetes treatment. Director Wendy Pascual said primary care is often the starting point for patients here, most of whom are immigrants.

“One thing we have been seeing year after year is that many patients came here with physical problems that really are mental health problems,” Pascual said.

Meanwhile, UNC Charlotte counseling professor Daniel Gutierrez had been looking for a way to get more involved in the community. A mutual friend put him and Pascual in touch, and Gutierrez suggested his master’s and Ph.D. students could offer counseling services.

He and Pascual set up a partnership last year, and now about eight students provide treatment. They’re unpaid — it’s part of their training. Some speak Spanish, some use an interpreter.

Gutierrez said they see a variety of issues.

“The big three we keep finding are depression, high levels of anxiety and then high levels of trauma,” he said. “At one point, about 85 percent of the folks were experiencing some level of some of that.”

That’s of everyone coming to the clinic for any kind of health care.

Its focus on the immigrant community means treating many people who are uninsured and often here illegally. 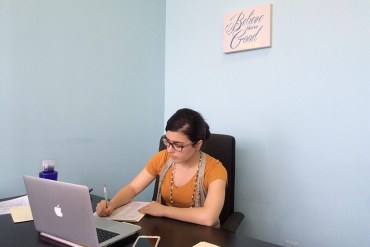 “Latinos, although they’re experiencing a lot of these mental health concerns, they are among the least likely to be able to get services,” he said.

Texas has several, including between that state’s flagship university and Austin Travis County Integral Care.

“The need is enormous,” said Kathleen Casey of the Austin-based partnership.

“We know that there’s great health disparities, lots of stigma overall and other types of cultural barriers that make it incumbent upon us to do our very best for outreach and engagement to that population,” Casey said.

Latino counselors say the stigma around mental health can be particularly strong in that community. There’s also the language barrier. And the actual border crossing can be traumatic, especially for those who cross illegally.

“There are stories of sexual assaults and rapes that happen during border crossings,” she said. “And then there’s more cumulative experiences of growing up in poverty or dealing with drug cartels or gangs or some people have difficult experiences in their country of origin.”

Pacific, based in Oregon, has around 20 master’s and Ph.D. students providing counseling at any given time. Even with that, she said Latinos face waiting lists for treatment. 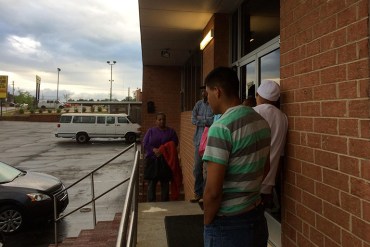 People line up outside Bethesda Health Center the one morning a week it takes new patients. (Michael Tomsic/WFAE)

Back in Charlotte, people lined up outside Bethesda in the rain recently. It was the one day a week Ana Farrera signs up new patients.

“The thing is that rain must have scared them away today,” she said, “because … last week we had 10 people, so I had to turn five away.”

Farrera said there have been some mornings when 20 people line up before she opens the door. They’re mostly waiting for primary care, but Farrera said many will get referred to the UNC Charlotte students for counseling.

Clinic leaders say the students are making a big difference at the clinic. Student Katherine Wilkin said it works the other way, too.

“For me it’s been good,” Wilkin said, because the experience has exposed her to more than “just the easiest client I can think of that we read about in textbooks,” Wilkin said. She feels “very comfortable building up from this.”

So do UNC Charlotte professors. The university plans to scale up the partnership with Bethesda.

Students Fill A Gap In Mental Health Care For Immigrants