Average premiums for employer-sponsored family coverage rose 3.4 percent for 2016, down from annual increases of nearly twice that much before 2011 and double digits in the early 2000s, according to a survey by the Kaiser Family Foundation. (Kaiser Health News is an editorially independent program of the foundation.)

But 3.4 percent is still faster than recent economic growth, which determines the country’s long-run ability to afford health care.

And the tame premium increases obscure out-of-pocket costs that are being loaded on employees in the form of higher deductibles and copayments. Another new study suggests those shifts have prompted workers and their families to use substantially fewer medical services.

For the first time in Kaiser’s annual survey, more than half the workers in plans covering a single person face a deductible of at least $1,000. Deductibles for family plans are typically even higher.

Deductibles are what consumers pay out of pocket before the insurance kicks in. Employers sometimes contribute to pre-tax accounts to help workers pay such costs.

Employers have been flocking to high-deductible plans in recent years, arguing that exposure to medical costs makes consumers better shoppers.

It also saves employers money. Having workers pay more out of pocket shaved half a percentage point off premium increases of employer-sponsored plans in each of the past two years, Kaiser researchers calculated.

Since 2011, the average deductible for single coverage has soared 63 percent, according to the survey, while workers’ earnings have gone up by only 11 percent. 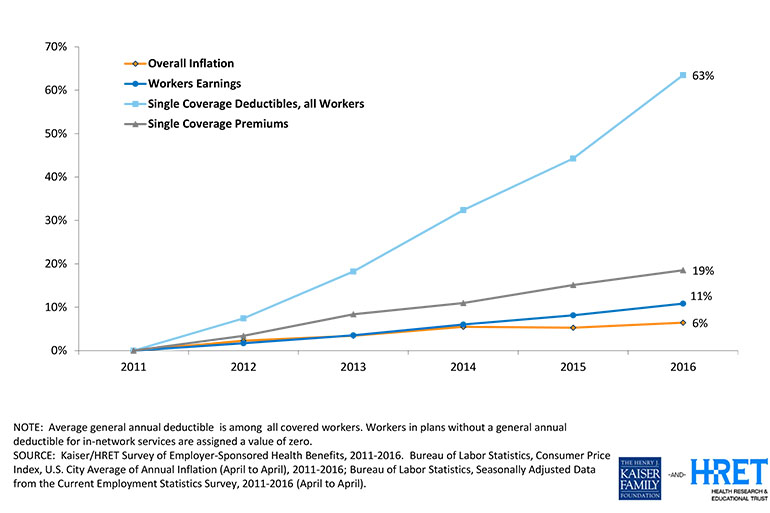 Pocketbook pain: Workers’ contributions to health-plan premiums have been rising faster than their pay. Deductibles have risen even more. (Courtesy of Kaiser Family Foundation)

The study of more than 1,900 small and large companies showed little evidence that high costs are prompting employers to dump health coverage or cut workers’ hours to make them ineligible for insurance. The Affordable Care Act requires companies with at least 50 employees to offer coverage to most full-time workers but not part-timers.

Instead, employers have taken unprecedented steps to control the cost of the medical insurance by having workers shoulder thousands in costs up front.

Republicans favor such “consumer-directed” insurance as bringing more market forces to bear on health products and services. If patients spend more of their own money, the idea goes, they’ll think twice about getting expensive or dubious procedures.

Consumer advocates complain that patients lack the knowledge and tools to shop intelligently for care. Even prices for basic procedures such as radiology scans often aren’t easily known beforehand.

Analysts associate high-deductible plans with rising consumer clamor over medical prices, especially for prescription drugs. Patients are more likely to recoil at a fivefold increase in the price of an EpiPen, which treats a severe allergy attack, when they bear the cost directly, although drug expenses are only a portion of the out-of-pocket burden.

“Rising drug costs are among the most visible health costs people have to bear as deductibles go up, so it adds to the focus,” said Drew Altman, CEO of the Kaiser Family Foundation. “But it’s a much broader phenomenon.”

Many consumers have responded another way to high-deductible plans: by using fewer medical services, suggests another report out this week.

In 2014, total annual health spending was $659 less per person in high-deductible plans, or 13 percent, than in conventional plans, according to analysis by the Health Care Cost Institute of claims for 40 million employees covered by Aetna, Humana and UnitedHealthcare.

What’s hard to tell is whether the savings came from avoiding needless tests and procedures or whether employees are skipping important treatment.

“If the intention is lower utilization will lead to lower spending, we’re seeing that” with high-deductible insurance, said Amanda Frost, an HCCI researcher. “I don’t think we have a good handle” on the effect on patient health.

Consumers on high-deductible plans from 2010 to 2014 used 13 percent less inpatient hospital care, 10 percent less outpatient care and 13 percent fewer prescriptions compared with those with conventional insurance — including a 21 percent reduction in use of brand-name drugs.

Members of high-deductible plans paid nearly a fourth of their total medical costs out of pocket versus only 14 percent for members of conventional plans.

High-deductible plans “are definitely becoming more common and probably will become even more common over the next few years,” Frost said.

Average annual 2016 premiums for single coverage were $6,435 for single coverage and $18,142 for family coverage, according to the Kaiser report. That includes premium contributions both by employers and by workers, usually taken regularly out of their paychecks.

The 2016 premium increase for family plans of 3.4 percent is close to the trend during the past five years. The 2015 increase was 4.2 percent.