Should women in their 40s routinely get mammograms to detect breast cancer?

Two studies released Monday aim to help resolve that question, which is one of the most intense debates in women’s health. The studies identify which women in their 40s are most likely to benefit from routine mammograms. 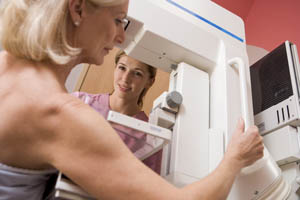 For years, the mantra was that regular mammograms save lives. So many people were stunned in 2009 when an influential panel of experts questioned that assumption.

The U.S. Preventive Services Task Force recommended against all women in their 40s getting a mammogram every year or two.

Those harms include frightening women with false alarms, prompting them to come back for repeated exams and unnecessary biopsies. Mammograms may also cause women to undergo unneeded surgery, radiation, and chemotherapy.

“Mammography may pick up small tumors that never would have progressed to harm them in their lifetimes,” said Jeanne Mandelblatt, an oncologist at Georgetown University. “Yet they’ll undergo treatment for breast cancer when that disease if it had been never detected would have never bothered the woman.”

The task force did conclude that a mammogram every other year is warranted for for women in their 50s because their risk for breast cancer is higher.

So Mandelblatt and her colleagues decided to see if there were some 40-somethings who had about the same risk as women in their 50s. They analyzed data from millions of women, mammograms, and breast cancer cases from dozens of published studies and huge databases.

“The studies were designed to identify what was the risk level that would be the tipping point so that the benefits and harms would be the same as what’s currently recommended for starting at age 50?” Mandelblatt said.

In two papers published in the Annals of Internal Medicine, the researchers found that two types of women would benefit from regular mammograms in their 40s: those who have very dense breasts, and those who have a close relative — a mother, sister or daughter — who had breast cancer.

“They’re twice as likely to develop breast cancer as the average woman, and that higher risk of developing breast cancer tips the balance to having more benefit to the harms,” she said.

The studies will help guide women and their doctors, according to Karla Kerlikowske of the University of California, San Francisco, who worked on the studies.

But for a lot of women, the answer still remains far from clear, said Fran Visco of the National Breast Cancer Coalition.

“There’s no absolute answer for women in their 40s or even in their 50s,” said Visco. It’s not as simple as “you fall into this category — you should be screened. That will save your life,” Visco said.

Others disagree with the papers, too.

“These papers are just several more in a series of papers that I think are misleading women and their physicians,” said Daniel B. Kopans, a radiologist at the Harvard Medical School. “And I think if women really appreciated what they’re being told they would be outraged.”

Carol Lee of the American College of Radiology worries the research could end up costing lives.

“This may discourage women who don’t have an identifiable risk factor from seeking screening, and therefore the potential lifesaving benefit of screening won’t be realized,” Lee said.

The American Cancer Society still recommends all women in their 40s get screened every year. And Otis W. Brawley, the society’s chief medical officer, says he’s not ready to change that profile.

“I don’t think we’re ready to actually have as a widespread policy that we would use these profiles to determine who should get screened and who should not get screened,” said Brawley, who wrote an editorial published with the studies.

But, he says, the new studies are clearly a step in that direction.

“I could easily see in the next several years that we would be using these profiles,” Brawley said.

In the meantime, it’s up to doctors and their patients to weigh the pros and cons of mammograms for women in their 40s for themselves.