Chemotherapy costs significantly more at a hospital than at a physician’s office, and patients might have decreased access to the cheaper option, according to reports out this week.

The first report, by Avalere Health, found that chemotherapy received in a hospital outpatient setting costs, on average, 24 percent more than when received at a physician’s office – or nearly $7,000 more. 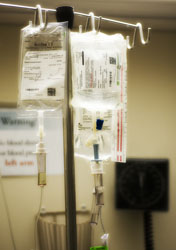 “It’s a significant [difference] – one that’s important for people to think about,” said Dan Mendelson, a co-author of the report and Avalere CEO.

Mendelson pointed to concerns about rising cost as health care providers consolidate in reaction to health reform. New payment models like accountable care organizations are encouraging physician offices to partner with or be acquired by hospitals. And as that happens, the more costly hospital treatment could take up a greater share of patients’ choices.

A report out Wednesday from the Community Oncology Alliance, which also commissioned the Avalere report, highlights this trend. In the past four and half a years, nearly 400 community-based practices across the country have come under contract with or been purchased by a hospital, according to COA. Another 241 practices have closed, while 132 practices merged or were acquired by a corporate entity.

Ted Okon, COA’s executive director, said the data shows not only a “de-evolution” in community-based care but a potential cost driver for cancer care. Physician practices are feeling pressure and looking to consolidate, he added, because of a poor economy, decreasing Medicare reimbursement and uncertainty over Medicare’s sustainable growth rate.

“What it comes down to, by and large, is the belief that the physician’s office is a very efficient location to deliver care, as opposed to a hospital outpatient setting,” Okon said of the two reports’ findings.

The COA report draws on public and private sources to track the settings in which oncologists practice.

In the Avalere study of treatment cost, researchers controlled for age, sex and patients’ history of cancer, but they were unable to control for severity of illness, which could be a significant factor in hospital versus office treatment.

An earlier study of Medicare had similar results, with hospital chemotherapy costing 14 percent more per patient, per month. And for a year’s treatment, patients themselves paid 10 percent – or $600 – more at the hospital. The same report notes that about half of U.S. cancer spending is among Medicare beneficiaries.

Avalere did not differentiate between patient cost and insurer cost, instead combining the two in its analysis. Given the rising cost of health care, however, Mendelson emphasized that “the total resource cost should be of concern to the patient,” too.