In California, roughly one in three hospitalized people over 34 years old has diabetes, increasing the complexity and cost of their care, according to a report released Thursday. 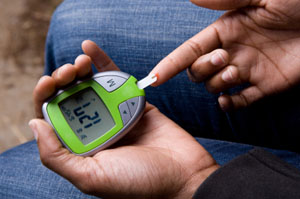 Hospitalizations for patients with diabetes on average cost about $2,200 more than for patients who didn’t have the disease, regardless of the reason they were admitted, according to the report by the UCLA Center for Health Policy Research and the California Center for Public Health Advocacy.

“Diabetes … affects most body systems in one way or another,” said Harold Goldstein, executive director of the California Center for Public Health Advocacy and one of the authors of the study. “If you have diabetes, it’s more challenging to treat anything.”

The study analyzed all 2011 hospital discharge data and financial reports from the Office of Statewide Health Planning and Development.

One reason cases involving diabetes cost more is that the disease affects the body’s ability to heal, Goldstein said.

The researchers reported that diabetes was listed as the primary cause in only 1.7 percent of all hospitalizations. But patients with diabetes have a higher risk for kidney and heart disease, blindness, and limb amputations–all of which can lead to significant expenses. In 2006, the authors write, two thirds of patients with diabetes were estimated to have had at least one of these complications, resulting in almost $23 billion in medical costs nationally.

The outlook is worse for the elderly and minority groups. Almost 60 percent of hospitalizations for patients with diabetes involved people 65 and older. Non-Hispanic whites still made up the bulk of discharges among patients with diabetes, but the study found that diabetic patients who were African-American, Asian-American, Native American or Latino were more likely to be hospitalized compared to non-Hispanic white patients.

“What that says is that this diabetic epidemic is a significant problem and significant driver of health care costs in every community in California. It’s true geographically and true by ethnicity,” said Goldstein. “The time is now to turn around this epidemic because we know the health care system is going to be overwhelmed.”

Most of the costs were shouldered by Medicare, the federal insurance program for the elderly and disabled, and Medi-Cal, California’s health plan for the poor and disabled. Focusing on prevention and early education, he says, could help reduce hospitalizations and drive down costs, a key focus of health reform.

The study didn’t differentiate between hospitalizations among patients with type 1 diabetes, which is partly genetic, or type 2, which is associated with obesity and an inactive lifestyle and affects minority groups disproportionately. The authors argue that because almost all adults diagnosed with diabetes have type 2, creating programs and communities that promote healthful eating and regular exercise, combined with improved access to primary care, could help lower  costs associated with the disease.

These kinds of interventions have been proposed in the past. Some initiatives, such as printing calorie information at restaurants, promoting the use of food stamps at farmers markets and limiting the number of fast food outlets in communities with limited access to fresh foods, have  shown only moderate influence on improving eating habits and helping people to lose weight.

A bill is pending in the California legislature to put warning labels on sugary drinks, much like those on tobacco and alcohol products. High intake of liquid sugar, Goldstein says, has been shown to increase cholesterol levels and fatty liver disease, which can lead to diabetes.

“We need to use what we know has worked for other harmful products and apply that to sugary drinks,” Goldstein said.

Study: Diabetes Afflicts 1 In 3 Hospitalized Patients Over 34 In California