Doctors are more likely to prescribe brand-name drugs over lower-cost generics when patients request them and when physicians have contacts with drugmakers, a study published in JAMA Internal Medicine Monday shows. 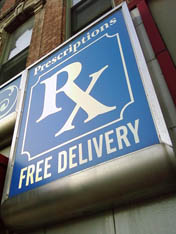 The researchers from Massachusetts General Hospital in Boston analyzed data from a survey of 1,891 doctors in 2009 and found that 37 percent of  doctors admitted to sometimes prescribing a brand-name drug at a patient’s request even though a generic version of the medication was available. They also found that doctors who had received free food and beverages from a drugmaker were more likely to give in to such patient demands.

Dr. Eric Campbell, the study’s lead author and a professor of medicine at Harvard Medical School, said it is important to note the results show that a majority of physicians – more than 60 percent – are not succumbing to such pressures. “Why this is important is because brand-name drugs are between probably 30 and 80 percent more expensive than the generics,” he added.

According to Campbell, many physicians often disregard the idea that common marketing practices of pharmaceutical companies influence the way they prescribe medications. But he suggests that it does have an impact. “There’s absolutely no doubt that these things influence physicians’ behavior to use the companies’ products. Denying that this exists is like denying that gravity exists,” he added.

Campbell and his colleagues also found that compared to those with less experience, physicians who have been in the workforce longer were more likely to engage in this behavior, although it is not clear why. “It might be that physicians who have been in practice longer may not have been trained around issues of conserving scarce medical resources in the same way that younger physicians have,” Campbell said, also adding that the relationship between drug companies and physicians might not have been seen as problematic when these doctors were trained as it is today.

Internists and psychiatrists were the most likely to prescribe the brand-name drugs. Several other specialties, including pediatrics, anesthesiologists, cardiologists, and general surgery, were significantly lower. Although his research did not address the variation among the medical specialties, Campbell believes the difference may be due to the diseases each specialty sees and the availability of new drugs used to treat them. “I think it has to do something with the nature of the drugs. For example, there aren’t as many new brand-name drugs in pediatrics compared to internal medicine,” Campbell added.

The federal government is working on rules to make clear when drugmakers provide gifts and entertainment to doctors. The Physician Payment Sunshine Act requires that the companies make available to the public a list of payments to doctors, including those for speeches, research and travel expenses. The regulations are still being finalized by administration officials.

“There’s pretty strong evidence linking educational efforts of pharmaceutical companies and gifts to prescribers to increased prescribing of more expensive brand-name drugs,” said Dr. Brian Alldredge, a professor of clinical pharmacy and neurology at the University of California, San Francisco. But in addition to focusing on medication prescribers, Alldredge adds that it is also important to look at patients, as they are also targets of widespread direct-to-consumer advertising campaigns for prescription medications. “I think it remains as an enormous problem,” Alldredge added.

“Given that brand-name drugs, in general, are much more expensive than their generic counterparts, this has the potential to be an extreme and unnecessary use of resources,” Campbell said.  Since the brand-name drugs provide no additional benefit to patients, “the only group that wins are the drug companies.”

Study: Doctors Give In To Patient Demands For Brand-Name Drugs