It’s a dieter’s nightmare. It’s also what many children’s hospitals in California are offering their patients, staff and visitors. 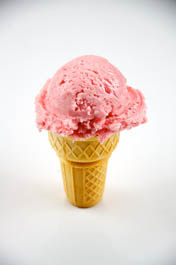 Researchers with the UCLA School of Medicine and RAND Corporation visited the state’s 14 major children’s hospitals last year and found many less-than-ideal food options. According to their study published Thursday in Academic Pediatrics, only 7 percent of hospital entrees were deemed healthy.

“That’s a low number made worse by the fact that they weren’t labeled healthy options, and there was no calorie information available,” said Lenard Lesser, a physician at UCLA Family Health Center and the study’s lead author. “With so many people eating there, children’s hospitals should be exemplars for healthy eating.”

Lesser himself visited children’s hospitals for the study and saw many food venues with sugar-sweetened beverages, fried chicken, burgers, fries and, conveniently located by the cash register, large refrigerators full of ice cream.

The study looked at 16 total food venues – cafeterias and snack bars catering to the hospitals’ outpatients and staff. It did not evaluate food offered to inpatients.

Researchers also rated each food venue overall based on a modified version of a nutrition scale used for restaurants and other eating establishments.The rating — which accounts for factors like the number of healthy entrees available, pricing and availability of calorie information — goes from 0 (least healthy) to 37 (most healthy). The 16 venues averaged a 19.1, with only one scoring higher than a 23. There is no definitive cutoff to determine whether a food venue is healthy, but Lesser said that some hospitals scored around the same level as a fast food restaurant.

There were, however, a few positive signs in the study: All venues offered diet soda and low-fat or skim milk, while a majority also offered baked chips, fruit, non-fried vegetables or a salad bar.

UCLA has eliminated fried food and trans fats, both in its food venues and on its menu for inpatients. The hospital also decreased the price per pound at its salad bar — a change that bumped up salad sales by 45 percent — and made water and juice standard with combo meals, said Dana Hunnes, a clinical dietitian who helps advise the hospital’s cafeteria. Sugar-sweetened beverages are now more expensive and sales of them have gone down, Hunnes added.