A federally funded project that researchers say has potential to promote aging in place began by asking low-income seniors with disabilities how their lives at home could be better, according to a study released Wednesday.

At the end of the program, 75 percent of participants were able to perform more daily activities than they could before and symptoms of depression also improved, the researchers said in the journal Health Affairs. Called Community Aging in Place, Advancing Better Living for Elders, or CAPABLE for short, the program was funded by the Center for Medicare & Medicaid Innovation.

The seniors who took part were each paired with a team for five months that included an occupational therapist, who made six visits; a registered nurse, who made four; and a handyman, who worked a full-day at the participant’s home installing assistive devices and doing repairs, according to the study.

The nurses and therapists helped participants identify three achievable goals for each member of the team and identify what barriers had to be overcome. For example, the therapist might survey a house for safety issues such as unsafe flooring, poorly lit entrances and railings in disrepair. The therapist then worked with the elderly person to identify assistive devices, repairs or modifications that could help achieve the participant’s goals. Next, the therapist created a work order for the handyman that prioritized those goals within a $1,300 budget for each dwelling.

Spending on assistive devices and home repairs ranged from $72 to $1,398 for each participant, the researchers said.

Researchers said they could not conclude that the participants’ improvements were due to the CAPABLE program because the project was funded without a control group to make scientific comparisons.

Sarah Szanton, the lead investigator and creator of CAPABLE, said the program hinges on two ideas. One is that environment influences health and the second is that seniors should set goals to improve their health. Seniors in her study were less depressed when they needed to rely less on others, she said. 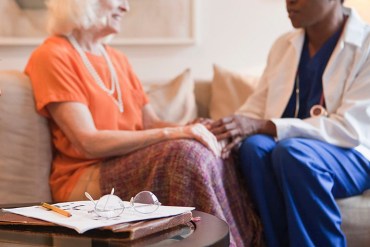 Instead of dictating health goals to the patients, the therapist’s first two visits were about listening to what the seniors thought their biggest problems were and creating plans on how to tackle them.

“There is strength to writing down those ideas, it shows [the patients] that they are active and resilient,” said Szanton, a nurse practitioner in West Baltimore and an associate professor of health policy and management at Johns Hopkins University in Baltimore.

For months after the program ended, she said, participants called to tell her they were still setting goals and working on accomplishing them. She saw that as her low-income patients aged, their environments became the biggest barriers to good health. She had patients who had to crawl to the front door to let her in because their homes weren’t built to accommodate a wheelchair.

The long-term effects of CAPABLE are still being studied by the National Institutes of Health and the Center for Medicare and Medicaid Innovation.

Though the cost savings are unknown, Szanton said it isn’t hard to see how CAPABLE could save money in the long run. The program cost around $3,000 per participant, but according to federal data, a semi-private room in a nursing home costs an average of $6,235 per month.

A version of CAPABLE is being studied in Michigan as a potential cost-saving program, and Szanton envisions it being incorporated into Medicare Advantage plans, accountable care organizations and Medicaid Waiver programs aimed at keeping people out of nursing homes.

Study Finds Seniors Benefit When Asked How To Help Them