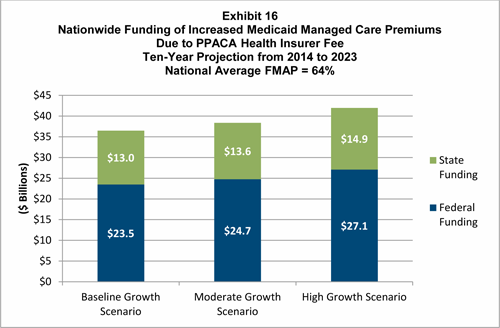 Under the health care overhaul, the federal government will begin taxing itself and the states beginning in 2014.

The law calls for a new tax on health insurers’ premium revenue — intended to help pay for expansion of coverage to 32 million uninsured Americans.  But the tax will be paid by all insurers, including those that contract with states to provide coverage to recipients of Medicaid, the state-federal health insurance program for the poor. Under federal law, that fee must be paid by the Medicaid program, meaning that state and federal governments must pick up the tab.

A report released today by the actuarial firm Milliman Inc. said the tax will cost the Medicaid program between $36.5 billion and $41.9 billion over 10 years. At least $13 billion will be borne by states, and at least $23.5 billion by the federal government, based on the state-federal Medicaid matching formula, according to the report paid for by the Medicaid Health Plans of America, which represents private health plans that cover people on Medicaid.  According to the America’s Health Insurance plans,  the tax overall would generate at least $73 billion from 2014-2019.

“This is not an issue on most people’s radar screens, but this is going to be a big problem,” said Matt Salo, executive director of the National Association of Medicaid Directors.  “This policy never really made sense … I get the point of an insurance tax, but when you are just passing on those costs to Medicaid, that makes no sense.”

He said states that are looking to scale back funding for Medicaid will struggle to find ways to pay the fee. About half the 60 million people on Medicaid are enrolled in Medicaid managed care plans.

Thomas  Johnson, president and CEO of the Medicaid Health Plans of America, said the report shows how states could be big losers from the tax. “It is clear from this report that the states will be the ones who will feel the pain of this unintended and misguided policy,” he said. “This report makes a strong case that Medicaid and CHIP should not have been included in this fee.”

“This is absolutely a big deal for states — particularly those with substantial [Medicaid] managed care plans,” he said.

America’s Health Insurance Plans, the industry trade group, said the insurer ‘s tax will cost the industry $8 billion in 2014, and a total of $73 billion though 2019. The trade group said the fee would be passed on to consumers through higher premiums.  It said the tax will increase the average costs of Medicaid coverage by about $1,530 per enrollee between 2014 and 2023.

“We believe that all consumers – public program beneficiaries, employers, and those purchasing coverage in the individual market – should be exempt from having to pay this tax that will increase their cost of health care coverage,” said AHIP spokesman Robert Zirkelbach.

Study: Health Law’s Tax On Insurers Will Take Bite Out Of Medicaid