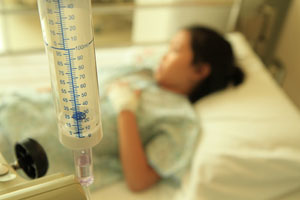 Insurance coverage may play a major role in the kind of care a young patient receives, according to a study published in the most recent edition of The Journal of Pediatrics.

That disparity did not hold true for kids diagnosed with a significant illness, who had the same odds of being admitted to the hospital regardless of insurance status.

The study is based on an analysis of emergency department visits recorded in the National Hospital Ambulatory Medical Care Survey from 1999-2008.  The survey collects data on approximately 33,000 visits annually.

It’s not clear whether the results indicate that ERs are skimping on care for uninsured and publicly insured kids, or perhaps overtreating kids with private insurance coverage, which tends to pay hospitals more. In a press release, lead study author Dr. Rebekah Mannix notes that “because ED physicians are salaried or paid by the hour, it is uncertain how or why a child’s insurance status could be associated with care decisions in the ED.”

Children with private insurance are 11 times more likely than uninsured children, and three times more likely than those with public insurance, to have a primary care doctor, according to the Agency for Healthcare Research and Quality.  That means privately insured kids are more likely to have been referred to the ER by their doctor, with instructions for a specific workup, including extra tests and procedures.  And they’re less likely to seek out non-emergency care in the ER.

It’s also possible that patients and parents with fewer resources also request less testing and treatment because of financial concerns, the authors suggest.

Almost half of all children do not have private insurance, according to government data.