Doctors report that they’re not always completely honest with patients, especially when it comes to disclosing a medical mistake, or discussing a difficult prognosis, according to a new survey. 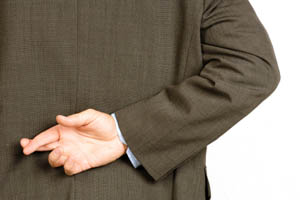 Despite wide acceptance of a professional code that endorses openness and honesty with patients, a 2009 survey of 1,891 doctors published in the February edition of Health Affairs found gaps between those standards and how they actually practice.

A vast majority of physicians said they embraced the American Board of Internal Medicine Foundation’s Charter on Medical Professionalism which calls for fully informing patients about the risks and benefits of interventions.  But more than a third said they did not completely agree it was necessary to disclose “all serious medical errors to affected patients.” Even more striking, one in five acknowledged they had not fully disclosed an error to a patient in the previous year because they feared a lawsuit.

“This survey raises a caution about the extent to which physicians are currently prepared to provide the kind of information that patients really need to fully be informed about their care,” said Dr. Lisa Iezzoni, the study’s lead author and director of the Mongan Institute for Health Policy at Massachusetts General Hospital in Boston. “Both patients and physicians need to have a better partnership around patient care,” Iezzoni said.

More than 55 percent of physicians reported they often or sometimes described a patient’s prognosis in a more positive manner than the facts might support. Meanwhile, 11 percent of respondents said they had told patients something untrue in the previous year, and 17 percent did not completely agree that physicians should never tell a patient something untrue. The authors point out that their estimates may be low because of the tendency to respond to questions in a way others regard favorably. Significant barriers also exist for physicians in talking about their relationships with drug and device manufacturers. More than a third of doctors did not completely agree that they should disclose their financial relationships with drug and device companies to patients.

Author Eric G. Campbell, an associate professor at Harvard Medical School and director of research at the Mongan Institute for Health Policy, said those attitudes could lead to uncomfortable conversations when industry relationships become publicly available in 2013 through a requirement in the health care law.

The survey also found notable variations correlated with race, gender and physician specialty. For instance, women and minorities were significantly more likely to follow standards for honest communication compared to white male doctors, which the authors suggest may be due to greater vigilance about the code on the part of newcomers to the profession. General surgeons also were significantly more likely to report telling patients the truth than doctors in other specialties.

“If you put people from different specialties together and they have fundamentally different attitudes, it’s going to potentially create problems,” Campbell said. “Think about the sports analogy – imagine a quarterback in a huddle, lying to the offensive line man about when he wanted the ball.  It’s just not going to work,” Campbell said.

The authors said the survey raised questions for subsequent inquiry about why physicians withheld and misrepresented information. Iezzoni speculated they may do so to keep their patients from worrying or they may lack the training to have difficult conversations, she said.  She noted that research suggests patients want to know the truth about their prognosis, even if it is dire, so they can make better-informed decisions.

Bernard Lo, a physician and professor emeritus of medicine and director emeritus of the medical ethics program at the University of California San Francisco, said that doctors should have more on-the-job training about how to talk to patients about difficult issues such as life-threatening illnesses.

“It’s very enlightening when you actually talk to the doctor and the patient after they had a conversation, and ask for their perspectives because they often don’t coincide on key issues,” Lo said. “Knowing the different perspectives is an important starting point.”

The Center for Survey Research at the University of Massachusetts, Boston, administered the eight-page survey in May 2009 to 3,500 physicians drawn from seven specialties. Almost two-thirds, or 1,891 completed the survey.

Study: Some Physicians Not Always Honest With Patients