The nation’s health law has promised sweeping changes to help millions of people with drug or alcohol addiction get treatment. Many unable to afford services in the past now can receive them without first landing in jail or an emergency room, health officials say.

“There is no illness that will be more favorably affected [by the Affordable Care Act] than substance abuse,” said A. Thomas McLellan, former U.S. deputy drug czar and now chief executive officer of Treatment Research Institute in Philadelphia. “This is the beginning of substance abuse disorders being part of mainstream health care.”

The law requires that substance abuse treatment be offered to people newly insured through the insurance exchanges or Medicaid, the government health plan for the poor and disabled. 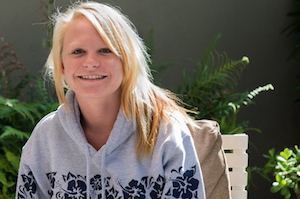 Jessica Schabel, 19, is under treatment at the Impact Drug and Alcohol Treatment Center in Pasadena, Calif., for heroin and methamphetamine addiction. Her insurance benefits only allowed for 30 days, but the facility paid for her to stay an additional 30 days to continue treatment (Photo by Heidi de Marco/KHN).

More than 23 million Americans needed treatment for an alcohol or drug problem in 2012 but only about 11 percent received it, according to estimates from the federal Substance Abuse and Mental Health Services Administration (SAMHSA).

One significant barrier to access is that drug treatment centers with more than 16 beds can’t bill Medicaid for residential services provided to low-income adults. The restriction is due to a decades-old federal law designed to prevent Medicaid funding from going to private mental institutions. The purpose was to avoid warehousing of mental patients, treatment providers said.

As a result of the limitation, drug rehabilitation centers across the nation are turning away new Medicaid beneficiaries who need residential treatment and now are entitled to receive it under Obamacare.

“The unintended consequence is that you are discriminating against an adult who needs help,” said Elizabeth Stanley-Salazar, a vice president at the Phoenix House, which offers drug treatment in a dozen states, including California, Florida and Virgina. “We don’t do that for any other illness or disease. … Everyone recognizes that it needs to be fixed.”

Health officials and treatment centers have raised concerns about the restriction.

In a letter to the Centers for Medicare & Medicaid Services last month, California’s Health Care Services Department director Toby Douglas said that just 10 percent of the available inpatient beds in the state are in facilities that meet the federal government’s size restrictions. He asked the federal government to give the state some flexibility in counting beds.

Similarly, the vast majority of the substance abuse treatment in Colorado is located in centers with more than 16 beds, said Arthur Schut, chief executive officer of Denver-based Arapahoe House. There are ongoing conversations among treatment providers statewide about how to legally get around the restriction so they can offer the newly available benefits to more people, he said.

“Everyone is in agreement about how dumb this is,” he said. “It doesn’t work economically and it doesn’t work for the people seeking treatment.

There are no plans to change the law, said Suzanne Fields, a SAMHSA senior advisor on health care financing. The federal government is working with states on other options, including treating patients under programs paid for with other federal money.

Fields said federal health officials are also meeting with insurance plans and trade groups to provide information and help them ease the transition to the new system of expanded benefits.

In the past, many people didn’t have access to substance abuse treatment because they were uninsured or their policies didn’t cover it. The majority of states also did not include substance abuse benefits or only offered bare-bones coverage through Medicaid.

“These are services that have not been covered or haven’t been covered very well,” said Dan Belnap, senior health policy analyst at Legal Action Center, a nonprofit advocacy group based in New York. “There is a lot of ground to make up.”

In addition to the protections under the Affordable Care Act, long-awaited rules for another federal law — the Mental Health Parity and Addiction Equity Act — were released late last year requiring that coverage for substance abuse and mental health treatment not be more restrictive than other medical coverage. For example, insurance companies can’t have different rules for co-payments or visit limits for substance abuse or other behavioral issues than for medical issues.

The expansion of coverage and services is also expected to lower health care spending. Illicit drug use in the U.S. costs more than $190 billion, including from lost productivity and on health care expenditures, according to estimates from the federal government.

Still, some of the reforms have sometimes been slow to take root.

For example, despite the new coverage and protections, treatment centers said they are continuing to fight with insurance plans over how long they can keep patients in care. The law does not specify length or intensity of treatment.

“This is disease in which continued treatment is essential,” said David Rosenbloom, a professor at Boston University School of Public Health. “If the new law is implemented by managed care companies with short leashes, they will undo its potential efficacy.”

Les Sperling, chief executive officer of the Central Kansas Foundation, said there is significant pressure by insurance companies to shorten the length of time people are in residential care. “There is that natural tension between a payer and a provider that continues,” he said.

At the Impact Drug and Alcohol Treatment Center in Pasadena, Calif., administrators said they constantly are trying to persuade insurance plans to pay for longer stays. “We have to paint a picture for the insurance companies of this sick person who needs a lot more help,” said Mark Paquet, admissions director.

Take 19-year-old Jessica Schabel from Yucaipa, Calif., who is covered through her parents’ plan. Her insurance benefits ran out after 30 days but administrators could not get the treatment extended. The facility paid for her to stay an additional 30 days.

Outside in the garden, where she sat down to eat a hamburger, Schabel explained that she dropped out of high school and has been arrested numerous times. She started using heroin and methamphetamine when she was 15, a habit Schabel said she supported by selling drugs.

“For people who have used for years, it takes a long time to break that habit,” she said.

Providing care for patients dealing with substance abuse has long been a priority, but plans are now doing what’s necessary to meet the new requirements, said Clare Krusing, spokeswoman for America’s Health Insurance Plans. Plans are basing their coverage decisions on what the evidence shows is “proven to be safe and effective for a particular patient given a particular condition,” she said.

Even with all of the unanswered questions and obstacles, the new benefits are a relief for those covered under Obamacare, said Tom Delegatto, executive director of business development for Gateway Foundation in Illinois.

“Nobody is jumping for joy when they have to go into substance abuse treatment,” he said. “But they are grateful to have the ability to pay for it. … They have an opportunity they did not have before.”