Republican members of Congress are at home this week, with many of them getting an earful from anxious constituents about their plans to “repeal and replace” the Affordable Care Act. A poll out Friday gives those lawmakers something to be anxious about, too.

The monthly tracking poll from the Kaiser Family Foundation finds overall support for the health law ticked up to 48 percent in February, the highest point since shortly after it passed in 2010. That was a 5-point increase since the last poll in December. (Kaiser Health News is an editorially independent project of the foundation.)

In addition, 6 in 10 people said they did not favor current GOP proposals for turning control of Medicaid, the federal-state program for low-income residents, over to the states or changing the federal funding method. More than half said Medicaid is important to them or family members. 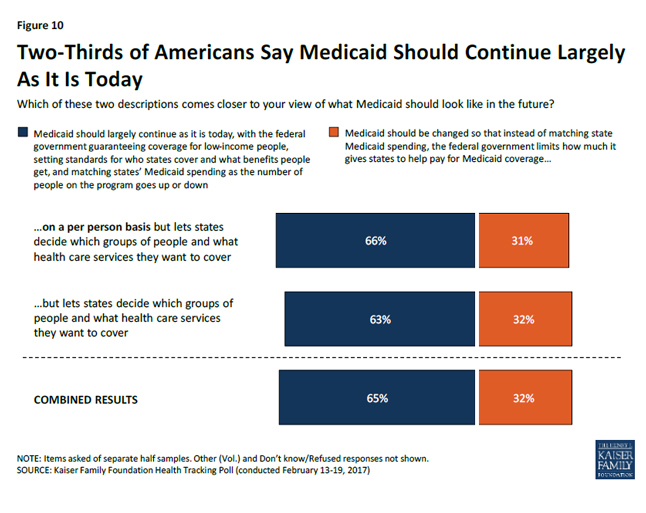 The increase in the law’s popularity is almost entirely due to a spike in support among independents, whose approval of the law has risen to 50 percent, compared with 39 percent unfavorable. Continuing a trend that dates to the passage of the law, the vast majority of Democrats approve of it (73 percent), while the vast majority of Republicans disapprove (74 percent).

Poll respondents are also concerned about the way Republicans say they will overhaul the measure. While they are almost evenly divided between wanting to see the law repealed (47 percent) or not repealed (48 percent), very few (18 percent) of those favoring repeal support the idea of working out replacement details later. More than half of the repeal supporters (28 percent of the sample) say the repeal and the ACA’s replacement should come simultaneously.

Interestingly, even among Republicans, fewer than a third (31 percent) favor an immediate repeal, while 48 percent support simultaneous repeal and replacement, and 16 percent don’t want the law repealed at all.

Simultaneous repeal and replacement, which is what President Donald Trump has promised, could prove difficult since Republicans have not agreed to a plan. They are using a special budget procedure, called reconciliation, that allows them to move legislation with only a simple majority in the Senate, but that bill is limited in what it can remove from the law and what can be added to it. Other bills would likely have to overcome a filibuster by Democrats in the Senate, which requires 60 votes. Republicans currently have a 52-48 majority in that chamber.

When asked about the Republican plans to overhaul the Medicaid program, nearly two-thirds of those polled prefer the current Medicaid program to either a “block grant” that gives states more flexibility but would limit Medicaid’s currently unlimited budget, or a “per capita cap,” which would also limit spending to states but would allow federal funding to rise with enrollment increases.

Respondents also strongly favor letting states that expanded Medicaid under the Affordable Care Act continue to receive federal funding. The Supreme Court in 2012 made that expansion optional; 31 states (plus Washington, D.C.) adopted it. Eighty-four percent said letting the federal funds continue was very or somewhat important, including 69 percent of Republicans, and 80 percent of respondents in states that did not expand the program.

Republicans are counting on savings from capping Medicaid to pay for other health care options they are advocating.

The national telephone poll was conducted Feb. 13-19 with a sample of 1,160 adults. The margin of error is plus or minus 3 percentage points for the full sample.

Support For Health Law Grows, Leaving Republicans In A Bind