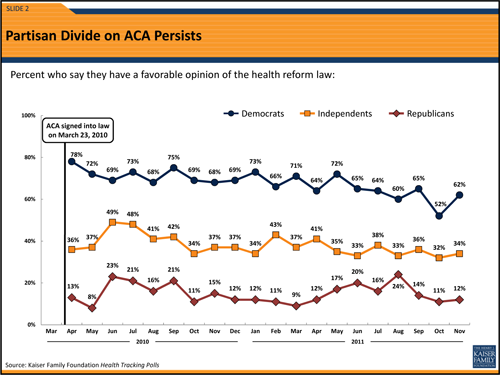 It’s up. It’s down. Americans’ views about the health care law are, well, fluid.

The latest Kaiser Family Foundation monthly poll shows that the law’s popularity rose a bit after hitting a new low last month. (Kaiser Health News is a program of the foundation.) Still, more people don’t like the law than do: 44 percent to 37 percent.  That was a small improvement from October, when 51 percent panned the law, but the law’s popularity remains below where it has been.

Democrats, whose gloominess about the law was responsible for bringing it down in October, got a bit more positive about the law in November, with 62 percent giving it a thumbs up, a 10 percentage point increase.

Pollsters found that when they asked people about elements of the law, many got it wrong. The poll found 56 percent think the law includes a government-run insurance plan as an option for consumers, which it doesn’t. Thirty-five percent of people said the law permits a government-run panel to make decisions about end-of-life care, even though such “death panels” were widely dubunked during the debate over the law.

The poll also found many people didn’t know some details of the law, including such benefits as a requirement that health insurers explain what they cover in clear, simple language.