Mary Hualde, a navigator in Utah helping people sign up for coverage under the Affordable Care Act, says healthcare.gov is finally working smoothly enough for her clients to enroll.

“It’s like a new world,” Hualde said this week about the Web portal that became the butt of jokes and an embarrassment to President Barack Obama after its troubled October launch frustrated millions.

While the website serving people in 36 states is still not perfect – insurers are concerned about getting incomplete or inaccurate consumer information — navigators and insurance brokers say that since major repairs were done over Thanksgiving weekend, the system is working most of the time.

Enrollment figures released Wednesday show that more than 110,000 people signed up for plans through the federal portal in November, more than four times the number in October, but still lower than what some advocates  hoped. Among states relying on healthcare.gov, Florida has the highest number of people choosing a plan over the two month-period (17,908), followed by Texas (14,038) and Pennsylvania (11,788).

The pace is expected to pick up this month as a result both of site improvements and the Dec. 23 deadline to enroll for coverage that begins Jan.1. 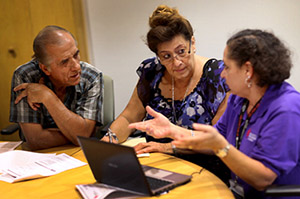 Based on the uptick, Obama administration officials said last night they are still on track to sign up 7 million people in new coverage by March 31, the close of open enrollment, as originally projected by the Congressional Budget Office. “We expect the bulk of enrollment will occur at the end of the enrollment period,” said Michael Hash, director of the Office of Health Reform.

Overall, counting signups through the 14 states running their own websites as well as through healthcare.gov, nearly 365,000 consumers have selected health plans — nearly a third of them in California. An additional 803,000 have been found eligible for Medicaid, the state-federal health insurance program for the poor.

View From The States

Since Thanksgiving weekend, navigators interviewed in five states served by healthcare.gov say they are seeing a surge of interest, particularly as more people learn the site is working better.

Patrick Kelly, a navigator with the Legal Aid Society of Roanoke Valley in southwest Virginia, said his appointment calendar is booked for the next two weeks, though he will try to squeeze in more because he doesn’t want to turn anyone away.

‘I’m going to have a hard time breathing through Dec. 23,” he said.

Now that healthcare.gov is working, Kelly said a big part of his job is helping consumers understand what they’re buying by explaining insurance terms like “deductibles,” “co-insurance” and “HMOs.” He credits healthcare.gov with providing a summary of benefits for each plan, which makes it easy for consumers to understand what’s covered and how much benefits cost. With one click, they can find out which doctors are in a plan (although experts say that consumers eager to stay with their doctors should double-check with them) and which prescription drugs are covered.

The site also allows people to almost instantaneously determine if they are eligible for Medicaid, the state-federal health insurance program for the poor, or federal subsidies to buy private health plans. So far, only about 40 percent of the 2.3 million people found eligible to shop in the exchanges have qualified for subsidies — far lower than the 90 percent projected in the first year by the Congressional Budget Office. Federal officials said Tuesday night they could not explain the discrepancy.

Kelly said most people have not complained about the high deductibles in many cheaper plans because they are relieved simply to have coverage or are already accustomed to seeing them.

“Nine times out of ten, people come away pretty satisfied,” he said.

He said he is worried, though, about reports that insurers may be getting incomplete or inaccurate enrollment information from healthcare.gov. As a result, he is telling clients to call insurers to confirm their enrollment.

In El Paso, Texas, with one of the nation’s highest rates of uninsured, navigators said healthcare.gov is working much better, but they still periodically hit glitches such as frozen screens. Delays in the launch of a Spanish-language web portal have also been a problem.

Because of language barriers and little understanding about insurance, it can take up to two hours to get people enrolled, said Jennifer Buschick, program director at Enroll El Paso. Her organization helped more than 400 people fill out paper applications and many are still waiting to find out if they are eligible for subsidies.

In Oklahoma, one of many states where state leaders are hostile to the law, navigator Chad Austin said it’s been a relief to walk people through healthcare.gov without getting stuck.

“Some people are finding the plans too expensive and choosing not to enroll, but the majority are finding the prices affordable and are pleased with the results,” said Austin, who works at Little Dixie Community Action Agency in Idabel, Okla.

Jan Plummer, a navigator in Waynesville, N.C., said the website is mostly working these days, and when clients have an email address and know their Social Security number, she can get them enrolled in under an hour. She said most people she works with are surprised at how affordable the new coverage can be with subsidies, or their income is so low that even a $20 to $40 monthly premium is seen as too expensive. She worked with a retired school teacher whose monthly premium increased from $650 a month to $700 a month but the new plan had better benefits.

“Most people are pleased,” she said.

“The system is working much better,” he said.

Some less expensive plans also have limited networks of doctors and hospitals, which concerns consumers who want to see a particular physician. He said some have opted to pay higher premiums to make sure they can continue with that doctor.

“Older, sicker people are generally pleased with the cost, younger and healthier less so,” he said.

More Than 110,000 Signed Up For Coverage Through Healthcare.gov In November