After Katie Gurzi woke in the middle of the night with excruciating chest pains, paramedics rushed her to the hospital.

That part went smoothly: Gurzi, 85, was pleased with the care she received. And doctors determined she wasn’t having a heart attack, just a spasm in her esophagus.

But then, in January of 2015, the city of La Habra, California sent her a $260 bill for “paramedic response” — after her insurers had already been billed for the November ambulance ride. That made Gurzi mad.

It wasn’t just that she believed the city was trying to reach into her purse for money it couldn’t get from health insurers. It was that she was rebuffed nearly every step of the way, as she contacted more than a dozen people from city bill collectors to her congressman. Some didn’t return her calls. Others refused to help. A few were just plain rude.

One city employee threatened to send her to collections, warning she wouldn’t ever be able to get a loan.

When she finally reached the La Habra mayor, Jim Gomez, he was nice enough but told her he didn’t have the authority to dismiss the fee.

“I thought, ‘you’re kind of a toothless mayor,’” she said.

Harper’s organization is helping Gurzi and three others fight similar bills but she believes many more people have simply paid up or haven’t come forward.

The city of La Habra says the $260 fees are to help recoup expenses that aren’t sufficiently covered by insurers.

“It is a fee that the city has in order to offset some of the costs associated with emergency transports,” said Cindy Knapp, bureau manager for the city’s police department. “It is to offset the costs generally, not for a specific transport.”

Knapp said the money goes into the general fund but that she couldn’t answer exactly how it is spent.

Harper said the cities shouldn’t be billing people like Katie Gurzi because they are already being paid by Medicare or other insurers.

“It seems to me their underlying rationale is that they don’t seem to be getting paid enough,” she said. “If that is the case, they need to take that up with Medicare and not move those costs to the beneficiaries.”

As in several cities around California, La Habra residents can avoid the fee by subscribing to a voluntary paramedic program, which charges an annual fee to cover emergency response. In La Habra, the fee for its FireMed program, as it is known, is $48, up from $36 in 2009.

If they subscribe, Knapp said, they are protected from any out-of-pocket expenses related to the 911 transportation. The city bills the insurance company but accepts whatever is paid without charging the consumer for any unpaid balance, she said.

If they don’t subscribe, or they aren’t La Habra residents, Knapp said they have to pay $260 each time they are transported by an ambulance, in addition to what insurers cover.

Although she was taken to a hospital near La Habra, where she had been visiting her brother, Gurzi lives in Long Beach. Her low-income studio apartment is decorated with wooden animal sculptures and beaded artwork from many years spent as a missionary in Africa, where she comforted dying AIDS patients. Among the books on her shelves are a Zulu dictionary and a book of Psalms.

Now retired, Gurzi has had two hip replacements, a mastectomy and a hernia surgery. Even so, she looks younger than her age and she volunteers regularly at a women’s jail and a local hospital. She lives primarily on Social Security and a small pension from a former job as a coordinator for emergency room physicians. 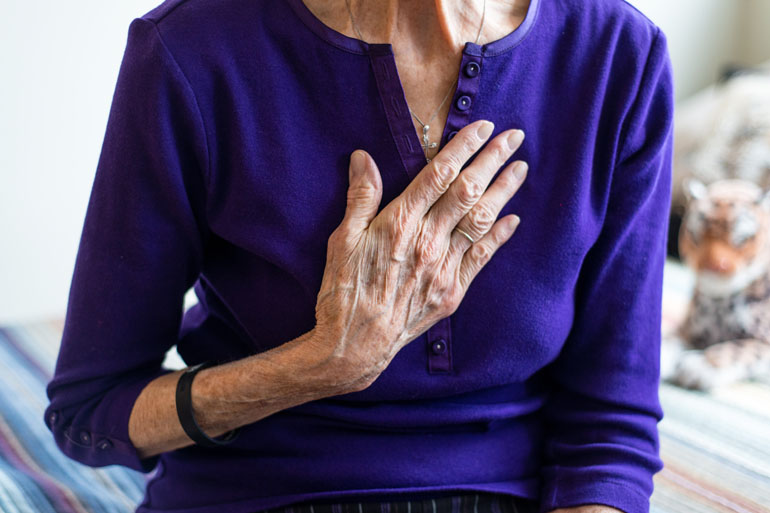 Gurzi holds her chest as she recalls waking up to severe chest pains, which prompted an ambulance ride to the hospital. (Heidi de Marco/KHN)

When she first received the bill from La Habra, she didn’t understand it. At the bottom was a one-line explanation: “Response to 911 Emergency call. This bill is a fee for a paramedic response at the scene.”

She assumed it was in error because her insurers had covered the service. Then she received another bill several months later. She called the city, explaining it had already been reimbursed for the ambulance ride by her insurers. That’s when the city employee threatened to send her to collections.

Before long, she got a notice from a collection agency. She called the agency immediately and explained that she was fighting the bill.

Gurzi said she lives by some simple rules. Be honest. Treat people with respect. And when something isn’t right, speak up. True to her principles, she started a year-long campaign against the fee, keeping track of every conversation with a handwritten cursive note. She became so frustrated at one point that she accused the city’s billing department of “senior harassment.”

When she contacted her congressman, Rep. Alan Lowenthal (D-Calif.), he responded that the matter was out of his jurisdiction but that he would forward the material to the city manager.

She also reached out to the Centers for Medicare & Medicaid Services, which oversees Medicare, and the Council on Aging in Orange County before she achieved some success with the Center for Health Care Rights. The center soon had three other cases. Two were from Montebello, California, including one involving a 72-year-old woman with mental health issues who was billed $357. Even though the center filed a cease-and-desist order, the city still sent the woman to collections, according to the center.

A 72-year-old man in Anaheim, California who had a stroke was billed $350 by the city for the 911 response, even though Medicare covered the ambulance ride, according to the center.

In response to an e-mail from the health care rights center, Medicare officials wrote back late last year saying the issue was forwarded to “program integrity” investigators.

Before Christmas, Gurzi got some good news. La Habra officials told her that based on her low income, she could apply for a hardship exemption to get the fee waived. But that, Gurzi said, wouldn’t be honest. After all, she has enough money to pay the bill.

“This isn’t a hardship,” she said. “It’s inappropriate billing.”

So Gurzi is continuing to fight her bill, which the collections agency told her is now $271.47. She remains miffed that the city of La Habra lacked both “grace and compassion.”

“I think seniors deserve a little better,” she said.

Surprise! Here’s Another Bill For That ‘Paramedic Response’