LOS ANGELES — Elba Ramirez wasn’t sure her customers would go for it. After all, these are people who line up for the mucho macho burrito, bacon-wrapped hot dog and the cheesy nacho supreme plate.

Would they trade rice and beans for fruit and greens? Tasty beef for lean meats? Yes, as it turns out.

As soon as photos and descriptions of the new, healthier plates went up on the side of her lunch truck, people started ordering. The turkey burger was an instant hit, as was the grilled chicken breast salad. Sales climbed. 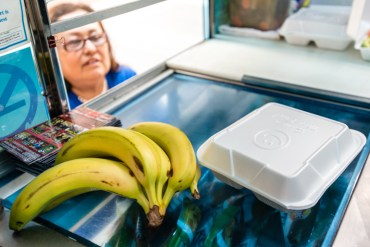 As part of a food project funded by the National Institute of Health Researchers, owner Elba Ramirez added healthy combo options that substitute fruit and salads for fries (Photo by Heidi de Marco/KHN).

“The people are looking for food that is fresh and healthy,” she said, standing inside her truck at the end of a recent lunch rush. “The food is good and it’s cheap, so the customers are happy.”

Ramirez was part of a recent experiment to improve the nutrition offered by taco trucks, one of the best known parts of Los Angeles’ dining landscape. That means meals with fewer calories, smaller portion sizes and more fruits, vegetables and whole grains.

The results, which still are being finalized, were not all good. Only about half of the two-dozen truck owners who participated finished out the six-month pilot. Some dropped out because their customers weren’t buying the new meals or because they got too busy.

Doroteo Lopez, 58, a truck owner near UCLA who completed the study, says the meals thrilled some of his customers — others, not so much.

Even so, it is important to try to reach the lunch truck crowd, said Deborah Cohen, a senior scientist at the RAND Corp. who led the federally funded project. 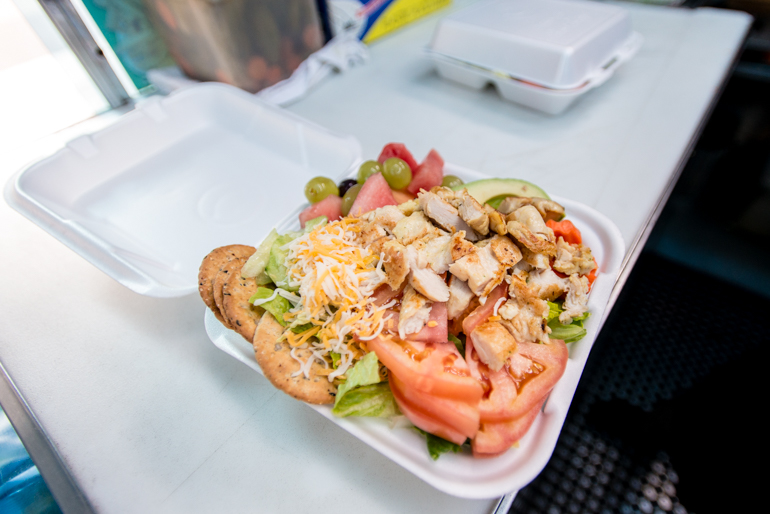 The grilled chicken salad and fruit plate is one of four healthy options Elba Ramirez offers at her lunch truck as part of food experiment project in Los Angeles, California (Photo by Heidi de Marco/KHN).

“If you can make this work with loncheras,” she said, “you can probably make it work anywhere.”
Many people don’t realize they are increasing their risk of chronic disease every time they eat a plate piled high with fats and carbs, Cohen said. And the lunch trucks – or loncheras – often serve a Latino clientele that already has high rates of diabetes, obesity and other diseases.

The food truck campaign is the latest push in LA County and elsewhere to make it easier for people to eat better. Corner markets are offering more fresh fruits and vegetables. Some restaurants are reducing portion sizes and providing more nutritious children’s meals. Many schools have nixed the sale of sugar-sweetened beverages.

“It seems like a lot of piecemeal things, but that is the approach that’s needed,” said Susan Babey, a senior research scientist at the UCLA Center for Health Policy Research, which isn’t involved in the project. “Any one change isn’t going to reverse the whole epidemic that has accumulated over the past 30 years.”

On a sunny February day, Ramirez’ customer Yael Ross, a 29-year-old teacher,ordered a veggie burrito, minus the cheese and sour cream. Ross loves Mexican food but doesn’t eat meat, so she was thrilled to see vegetarian choices on the menu. She thinks Los Angeles is the perfect place to try out the idea.
“LA has one of those demographics that really care about health and appearance,” she said. “People really do look for the healthier option.”

But let’s face it, folks don’t often head for the lunch truck with health food in mind. Daniel Godwin, 45, says he can’t resist the bacon-wrapped hot dog. “I eat healthy at home,” he said. 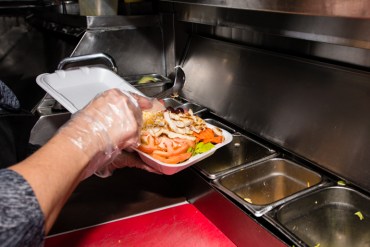 Elba Ramirez, 44, prepares a chicken salad plate at her food truck in Los Angeles, California, on Wednesday, February 4, 2015. Ramirez says it has become a popular option with customers (Photo by Heidi de Marco/KHN).

Maria Eseo has high cholesterol and tries to watch what she eats. But not today. She ordered the beef combo plate with rice and beans. “It’s awesome,” she said.

Maybe next time, Eseo said, she will make a healthier choice. “At least they are offering them,” she said.

RAND sent out a nutritionist to help design new menu items and show the cooks how to prepare them. Researchers helped publicize the businesses through social media and brochures and promised to pay truck owners $250 for participating. At first, customers could purchase the healthier meals at a discount.
In part, the sales of the healthier plates depended on the truck’s clientele – whether they were corporate foodies, for instance, or recent immigrants.

“The neighborhood where they are parked is important,” said graduate student Ben Colaiaco, one of the researchers. Ramirez says she sells more healthy meals in Koreatown and downtown, where there is a mix of ethnicities rather than just first-generation Latino immigrants.

Lopez, the vendor near UCLA, said students especially like his lighter menu. But the older customers stick to tacos, burritos and quesadillas, especially savoring the marinated pork and beef, he said.

Olga Aguilar, 30, who parks her truck in downtown Los Angeles, worked with a nutritionist to develop two new plates – chicken tacos and carne asada, both served with green beans, carrots, melon and strawberries. The new additions raised some eyebrows among her customers and her competitors. 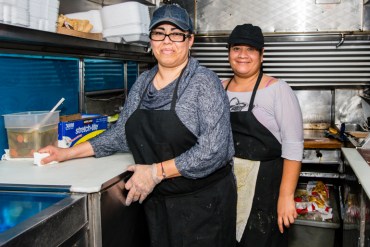 Elba Ramirez, 44, owner of Lily’s Catering food truck and her cook Gladys Martinez, 39, at the end of their lunch shift (Photo by Heidi de Marco/KHN).

Nevertheless, they were popular. Aguilar said some of her customers told her that they have high cholesterol and are supposed to eat less grease and less meat. “They tell me the doctor tells them to eat more vegetables,” she said.

On a recent day, Colaiaco came to do a final interview with Ramirez about her experience and to deliver the $250 check for participating.

“What do your clients think of the new plates?” Colaiaco asked.

She said she doesn’t have a lot of time to talk, but nobody had complained. “A lot of people say they are delicious,” she said.

The pilot project is over now, but she isn’t finished yet. She has plans for a tasty new item she never considered before: a veggie burger.

Surprise! The Taco Truck Is On Your Diet