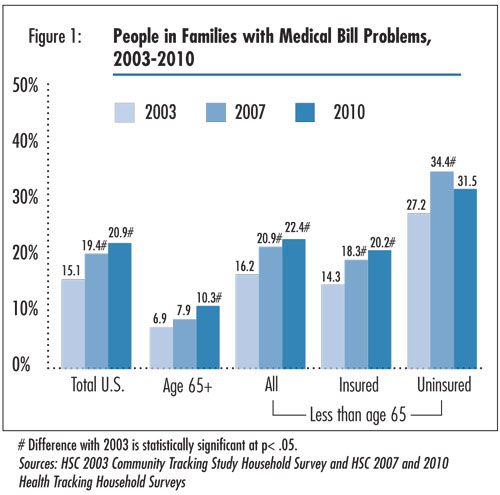 Americans continue to struggle to pay their medical bills, and even the 2010 health care overhaul may not ease their financial burden.

A new survey from the Center for Studying Health System Change and the Robert Wood Johnson Foundation shows the percentage of American families having difficulty paying their medical bills did not increase from 2007 to 2010, despite the economic downturn during that period. But the proportion with medical bill-paying difficulty in 2010 was more than one-third higher than in a similar survey in 2003. Overall, the national study shows that one in five Americans reported trouble paying medical bills last year.

Those with the most medical billing problems fell in low- to middle-income levels and averaged around $6,500 in medical debt. More than half of those families paid off “none or little” of their medical bills and said that it will take more than a year to pay off their debt. More than 17 percent of people with medical debt expect it will take longer than five years to pay off.

Older Americans who qualify for Medicare are also feeling the pinch. The study notes, “Compared with younger people, medical bill problems typically have been much lower among people aged 65 and older, despite higher out-of-pocket spending because of elderly people’s greater health care needs. Marking a significant upward trend, the proportion of elderly people with medical bill problems rose from 6.9 percent in 2003 to 10.3 percent in 2010.”

This study is featured in our weekly Research Roundup along with other health care studies and reports.

This article was updated to correct the information on seniors and income.