A Gallup poll released Tuesday says that the Affordable Care Act is significantly increasing the number of Americans with health insurance, especially in states that are embracing the law. It echoes previous Gallup surveys, and similar findings by the Urban Institute and RAND Corp. 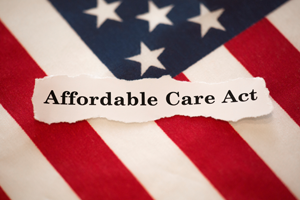 The latest Gallup survey found that, nationwide, the number of uninsured Americans dropped from 18 percent in September 2013, to 13.4 percent in June 2014. States that chose to follow the ACA’s provisions most closely, both by expanding Medicaid and establishing their own new health insurance marketplaces, as a group saw their uninsured rate drop nearly twice as much as states that declined to do so.

“To drop 10 percent in the uninsured rate within really just six months is really an incredible achievement,” said Arkansas Surgeon General Dr. Joe Thompson. Thompson lobbied for his state’s unique, bipartisan Medicaid expansion, which uses federal funding to buy private insurance for low income people. He says about 80 percent of those with new, private insurance in Arkansas purchased it with Medicaid subsidies.

“Clearly we are having an impact that benefits our citizens,” said Thompson. “Those other states that have chosen not to make something good happen out of the Affordable Care Act are missing that opportunity on behalf of their citizens.”

Among the states that didn’t expand Medicaid or set up their own exchanges are Georgia, Indiana and Mississippi, all of which saw their uninsured rates drop less than 2 percentage points.

Sam Mims, a Republican state legislator from southwest Mississippi, said the Affordable Care Act is still not the right way to go for his state.

He said the legislature is taking steps to expand access to health care, such as allocating more money to federal clinics, expanding mental health clinics and working on programs to get more doctors and dentists to the state.

Not every state that expanded Medicaid saw big drops in the percentage of uninsured. Massachusetts and Hawaii  saw declines of less than 1 percentage point, for example. Gallup’s Witters said that’s because those states already had very low uninsured rates prior to the ACA.  California, which fully embraced the law but has a higher number of uninsured than any other state, saw a decrease of 5.3 percentage points in its uninsurance rate, according to the survey.

The telephone poll was part of the Gallup-Healthways Well-Being Index, and it included more than 178,000 people interviewed in 2013 and more than 88,000 people surveyed in the first half of 2014.

Jeffrey Hess of Mississippi Public Broadcasting contributed to this report.

This story is part of a reporting partnership between NPR, Mississippi Public Broadcasting and Kaiser Health News.