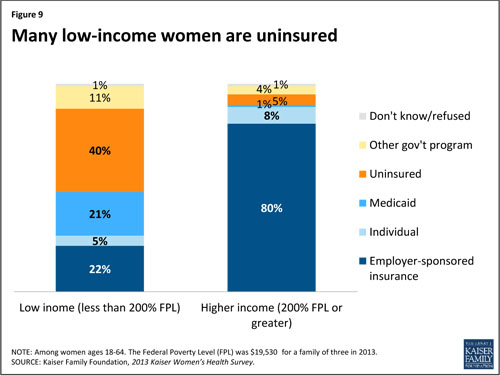 A large number of women face significant barriers to health care, and while the health law will likely help them get services, some are unaware of the benefits already in effect, according to a new survey from the Kaiser Family Foundation. (Kaiser Health News is an editorially independent program of the foundation.)

Intended as a baseline to measure the future impact of the law, the findings identified several key issues.

In addition, out-of-pocket costs were more of a barrier to care for women than men, with 22 percent of women in this age group reporting that they had not filled a prescription or had skipped a dose of medicine in the previous year, compared with 12 percent of men. Twenty-eight percent of women were having problems paying off medical bills compared with 19 percent of men. This may be because women on average earn lower wages, have fewer financial assets, accumulate less wealth and have higher rates of poverty, according to the KFF report. For comparison purposes, the foundation also surveyed men ages 18 to 64.

Amy Allina, deputy director at the National Women’s Health Network, spoke at a briefing on the survey about the hard choices women make. “Postponing or skipping care when you can’t afford costs isn’t a crazy decision — the findings show that a significant number of women that have medical debt reported that they have to use most of their savings [to pay off debt], they have trouble paying for housing, they’re contacted by collection agencies. These are experiences that have lifelong consequences.”

Cara James, director of the Office of Minority Health at the Centers for Medicare and Medicaid Services, which does outreach and data collection on health, said that her office will in June launch a national campaign to reach women and families on what having insurance means and how to use benefits.

Meanwhile, although four in 10 women of reproductive age reported that they have had an HIV or STI test in the past two years, half those women assumed tests were included in routine gynecological visits. Sixty percent of women between 15 and 44 had recently had a conversation about contraception with a provider, but only 50 percent had talked about sexual history, 34 percent about HIV and 30 percent about STIs.

This particular finding is troubling because providers have clinical guidelines to discuss sexual health during visits, said Vanessa Cullins, vice president of external medical affairs at the Planned Parenthood Federation of America.

“If you pair that with data that many providers don’t do the test that they’re supposed to do such as annual Chlamydia under the age of 25, or determining whether or not baby boomers have Hepatitis C, means we have a lot of work to do in terms of provider and consumer knowledge,” she said.

The national survey, conducted by Princeton Survey Research Associates International for the Kaiser Familiy Foundation, surveyed 3,015 women late in 2013 and has a margin of error of  +/- 2.9 percentage points.

Survey: Many Women Unaware How Health Law Benefits Them

Some Ivory Towers Are Ideal For A Pandemic. Most Aren’t.