Nearly six in 10 Americans who bought insurance for this year through the health law’s online marketplaces were previously uninsured—most for at least two years, according to a new survey that looks at the experiences of those most affected by the law.

That finding is higher than some earlier estimates, and counters arguments made by critics of the law that most of those who purchased the new policies were previously insured. 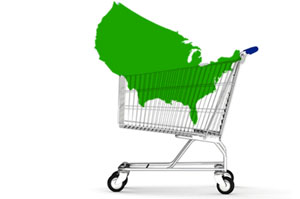 The survey also found that consumers who purchase their own coverage because they can’t get it at work are more likely to have a favorable view of the Affordable Care Act than the general public. Still, they are nearly evenly divided, with 47 percent holding a favorable view of the law and 43 percent an unfavorable one, according to the survey by the Henry J. Kaiser Family Foundation. (Kaiser Health News is an editorially independent program of the foundation.)

That compares with 46 percent of adults nationally who are sour on the law, and 38 percent who hold favorable views.

Consumers who received a government subsidy to help them purchase a plan were most likely to say they benefited from the law, according to the Kaiser survey. Those most likely to say they were negatively affected were those who had prior coverage but had to switch because their plans were discontinued for not meeting the law’s standards or for other reasons.

The report is likely to provide fodder for all sides in the debate about the law’s effect on health care costs and reducing the number of uninsured, which remains sharply partisan.

The findings suggest the new market for those who buy their own insurance “is working far better than critics say it is, but probably not as well as advocates hoped it would be,” said Drew Altman, president and CEO of the nonpartisan foundation.

Aside from data about premium costs, there has been little information so far about the experiences and perceptions of those who buy their own coverage. Are they healthier or sicker than those who get coverage through their jobs? Did people who lose their former coverage end up paying more or less for new plans? Do they like their coverage?

The Kaiser survey provides additional details based on a telephone survey of a nationally representative sample of 742 adults who purchased their own coverage. Many of the health law’s provisions were aimed at them, from the subsidies to help low- and middle-income residents buy coverage, to rules barring insurers from rejecting people with medical conditions, or charging women more than men.

The report shows sharp contrasts between those who say the law benefited them and their families and those who felt it hurt them:

— 34 percent of enrollees say they have benefited from the law, often citing lower costs or better access to care, while 29 percent said they were negatively affected, generally as a result of increased costs.

— 71 percent of those who enrolled in a plan that took effect after Jan. 1 rate their coverage as excellent or good, with 55 percent saying it is an excellent or good value for what they pay, but 39 percent rate it as an “only fair” or “poor” value.

— 43 percent say it is difficult to afford their monthly premiums and nearly half, 46 percent, are not confident they would be able to afford their share of the cost of a major illness or injury. About one third of those with new plans say they are dissatisfied with their deductibles.

Overall, about half of those who purchased a plan that met the health law’s rules said they got help in enrolling, from family members, assisters, brokers or others.

The survey was taken in April and early May, which means some respondents had held their policies since January, while others didn’t finish enrolling until mid-April, so had little or no experience using the new plans.

“It’s still fairly early so I’m not sure how much weight to give these responses,” said Sabrina Corlette, project director at the Health Policy Institute at Georgetown University. “How many are satisfied but haven’t used their plan yet?”

Altman acknowledged that it will be several years before the full picture is known, but said the survey offers insights into several important policy questions, from the percent of enrollees who were previously uninsured to their health status when they signed up.

The relative health of new enrollees is important because insurers base their premiums partly on estimates of how much they may have to pay out in claims. Under new rules, they can no longer bar the sick or charge them more.

The survey found that people enrolling in new coverage were more likely to report being in “fair” or “poor” health (17 percent) than those who hung onto older plans purchased before the law went into effect (6 percent), suggesting they may be sicker and costlier to cover. Insurers built such projections into their rates for this year and as people start to use their coverage, are only starting to find out if they projected correctly.

One section of the survey examines the experiences of those whose policies were canceled, or who switched from previous coverage to something new for other reasons.

While the law’s critics have argued those consumers ended up paying more and getting less, the report found that 46 percent of those who switched plans paid less for their coverage, often because of subsidies, while 39 percent paid more. Annual deductibles – the amount enrollees pay before insurance picks up most of the tab – are similar to what they paid before. More than half described their choice of medical providers as “about the same.”

Even so, the survey found that those who switched are less satisfied with the cost of their plans than those who were previously uninsured and less likely to believe their coverage is a good value.

Those reactions should not be seen as “a call to arms to beef up this coverage” since such efforts could boost premiums and government spending on subsidies, said Joe Antos of the American Enterprise Institute.

The federal government is expected to spend about $12 billion on insurance subsidies this fiscal year, which ends in September, according to the latest report from the Congressional Budget Office. People earning between 100 percent and 400 percent of the federal poverty level – about $11,500 to $46,000 a year — can qualify for subsidies on a sliding scale.

“There are resource limits,” Antos said. “Going back to taxpayers and saying we want you to cough up more money probably won’t be a big seller.”

Survey: Most Buying On Insurance Exchanges Were Uninsured