Every patient room is private, unlike in the older hospital that sits next door waiting to be razed. The new operating rooms are almost a third larger. The building’s filtration systems expel air instead of recycling it through the building, reducing the transmission of infectious diseases. There are three open-air gardens within the building and one on a roof where patients can relax.

Through new construction and expanding its doctors’ groups, Sutter Health is enhancing its position as one of the most dominant hospital systems in California. In addition, Sutter is further ahead of many competitors in fashioning itself into a so-called accountable care organization, responsible for coordinating care between hospitals, specialists and primary doctors.

Although Sutter executives say these developments will improve patient care, some analysts and patient advocates worry about the growing leverage the nonprofit hospital system has in negotiating rates paid by insurers, employers and patients. Sutter already is the priciest health system in California.

“As Sutter gets bigger,” says Anthony Wright, executive director of Health Access California, a nonprofit advocacy group based in Sacramento, “it can dictate higher prices and is less accountable for ensuring good quality because it has a lock on certain markets.”

Sutter officials say they have already invested heavily in advancements such as electronic health records that are encouraged by the federal health overhaul law passed this year. Federal health officials hope the changes encouraged by the law will lead to more efficient care for patients in Medicare, the federal program for seniors and the disabled, and that better practices ultimately will filter down to the privately insured. 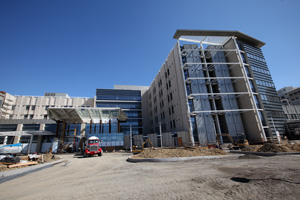 The $618 million Mills-Peninsula Medical Center, slated to open in February, has three indoor gardens and one on a roof. With new construction projects like this one, Sutter Health is becoming one of the biggest hospital systems in California, though some are wary of its influence. (Penni Gladstone for KHN)

“Sutter is positioned to respond well to the will of Congress,” says Patrick E. Fry, Sutter’s president and CEO.

Sutter hospitals in the Bay Area last year received more than 1 million outpatient visits from patients who were covered by insurance or paid out of pocket. That was 35 percent of the region’s total and more than any other hospital system, state data show. Sutter’s hospitals had 40,181 inpatient admissions, meaning that more than one out of every four hospitalizations in the Bay Area took place at a Sutter facility. Only Kaiser Permanente admitted more patients. (Kaiser Health News is not affiliated with the insurer.)

Sutter is expanding on several fronts. In September, Brown & Toland, one of San Francisco’s largest physician groups with 800 doctors, joined the network of doctors affiliated with nonprofit foundations Sutter established. More than 330,000 patients see Brown & Toland physicians, who are more likely to refer them to Sutter hospitals when they need treatments.

At the new Mills-Peninsula hospital, many Sutter-affiliated doctors will work in a building connected to the hospital. Jeff Gerard, a Sutter executive who oversees the region, predicts a change for the better: “People actually see each other at lunch and it’s a wonderful way to share information and build relationships, and it just doesn’t happen in today’s environment.”

For More On Hospital Prices

“Medicine has changed since this facility was built,” he says during an interview at the campus on Buchanan. “The days where it was one doctor and one nurse providing care are over. It becomes a competitive sport just to have enough room.”

‘Let’s Gentrify Our Patient Base’

That may be the case, but Alain Enthoven, a Stanford health economist, says many of the expensive construction elements at new hospitals don’t improve patient care. “In some cases,” he says, “our hospitals are rather more beautiful than we really need, if we’re trying to get health care out to all Americans.”

Sutter’s proposed placement of the new hospital in an upscale neighborhood has been greeted skeptically, especially given Sutter’s reputation for strategically locating its facilities to bolster its market clout and attract the best paying patients. “A big piece of this is ‘let’s gentrify our patient base, and we’ll have a better bottom line.’ And there’s a piece of ‘let’s create these places where we’ll have a more upscale experience,'” says Ken Jacobs, a professor at the University of California, Berkeley’s Labor Center. “They’re trying to get away from a place where you have people who are uninsured or on Medi-Cal,” the state’s low-paying insurance coverage for the poor.

The prices Sutter gets for privately insured patients have risen to the point that in 2009, the average price of a day of care at its hospitals was 37 percent above the state average. That helps explain why hospital care in the West Bay counties of Marin, San Francisco and San Mateo is on average more expensive than anywhere else in California, according to the state data.

A Federal Trade Commission analysis in 2008 determined Sutter’s merger of Summit Medical Center in Oakland and Alta Bates Medical Center in Berkeley in 1999 “may have been anticompetitive” and led to big price increases of as much as 72 percent for one insurer.

Some insurers are starting to balk at Sutter’s high prices. When the University of California and its insurer, Health Net, this year designed a new health maintenance organization network for university employees, it excluded several Sutter medical groups and hospitals because they were more expensive than other providers, according to Brad Kieffer, a Health Net spokesman.

Stephen Shortell, dean of the UC Berkeley School of Public Health, says Sutter already has so much market leverage in northern California that he doubts simply becoming an accountable care organization would give it more influence than it has now. “To say they’re going to be able to increase their negotiating clout to set prices would mean to expand significantly and acquire more hospital physicians and hospitals,” he says.

Yet that is what Sutter CEO Fry envisions. “We have an opportunity to grow our medical foundations,” Fry says. “We have opportunities to build new hospitals in different areas because our medical groups are large enough to support a new facility.”