Consumer advocates, physician groups and several Democratic lawmakers are fighting a quiet battle over a key benefit in the health-care law: tax credits to help millions of people purchase insurance. 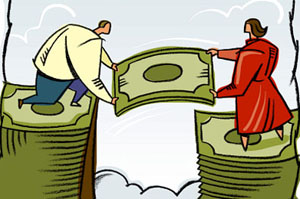 At issue is a section of the law that outlines when low- and moderate-income employees can opt out of their employer’s coverage and instead get federal subsidies to buy insurance through new state-based marketplaces, called exchanges.

The debate over who qualifies for subsidies has been overshadowed by more-polarizing issues such as the government’s authority to require most people to buy insurance. But if the Supreme Court upholds the law – or even most of the law – the way the tax-credit dispute is resolved will help determine how many people can get subsidized coverage.

A proposed Treasury Department rule says workers and their families cannot qualify for those subsidies unless their employer’s plan is unaffordable because it exceeds 9.5 percent of their household income.

Consumer advocates oppose the rule because it bases affordability on how much employees would pay to cover themselves, not on the cost of covering their entire family. As a result, they say, many workers will be unable to afford family coverage, yet their spouses and children will be ineligible to get help to buy insurance. An estimated 3.9 million dependents would be affected, according to one estimate.

“The proposed rule excludes people Congress intended to cover,” said Bruce Lesley, president of First Focus Campaign for Children, which wrote a letter to Treasury signed by more than 100 advocacy groups, including the American Academy of Family Physicians, the Children’s Defense Fund, the March of Dimes and the National Council of La Raza.

The letter calls on the president and congressional leaders to take “administrative action or legislation” to clarify what Congress intended.

Treasury officials are reviewing the comment letters as they draft final rules expected to be released in the upcoming weeks.

“We are working with consumers, businesses and all interested parties to ensure women and families get the affordable care they need,” Treasury Department spokeswoman Sabrina Siddiqui said in a statement, declining to elaborate.

Supporters of Treasury’s proposed rule, among them employer groups and insurance brokers, say it closely follows wording in the law that defines affordability in terms of the cost of “self-only coverage.”

Critics, including the National Partnership for Women and Families, interpret the law differently, saying it allows for basing the affordability standard on the cost of family coverage. The group notes that Treasury officials plan to use the cost of a family plan as a basis for exempting some people from penalties for not buying insurance.

“It’s unlikely that Congress intended affordability to be determined one way” for penalty fines and another for subsidies, the group’s letter argues.

“The notion that Congress wrote the law in a manner that would exclude many families from access to more affordable coverage. . . is simply incongruent,” the lawmakers, including Rep. Sander M. Levin (Mich.), the ranking Democrat on the Ways and Means Committee, and Rep. Henry A. Waxman (Calif.), the ranking Democrat on the Energy and Commerce Committee, wrote Treasury in a Dec. 6 letter.

A lot is at stake for employers and taxpayers. For every worker who forgoes “unaffordable” job-based coverage and gets subsidized insurance, the employer would pay either a $3,000 per subsidized-worker penalty or $2,000 per employee, whichever is less. Employers with fewer than 50 workers are exempt.

The government’s costs will also be lower if more workers retain job-based coverage, because fewer people will seek subsidies.

On the other hand, tax credits are the main way the law is expected to help low- and middle-income Americans buy insurance if they don’t get affordable employer-based coverage. By 2019, for example, the Congressional Budget Office estimated that the government will spend $70 billion in tax credits to help 18 million people buy coverage through the exchanges, which are supposed to be set up by 2014.

The average amount workers paid for an individual health insurance policy last year was $921 – or 18 percent of the total cost of the plan, according to an annual survey by the nonpartisan Kaiser Family Foundation and the Health Research & Educational Trust. (Kaiser Health News is a foundation program.)

Workers’ share of a family plan averaged $4,129 last year, or 28 percent of the total cost, according to the foundation survey.

Based on those figures, a worker making $40,000 a year would be ineligible to seek subsidies because the $921 is less than 9.5 percent of income, even though the cost of the family plan would exceed that cap. In that case, the worker’s dependents also would be unable to get help.

The policy is likely to hit women, who were nearly 2.5 times as likely as men to be insured as a dependent, the hardest,according to the National Partnership.

“It will force more people into not having an affordable option,” said Dana Cope, executive director with the State Employees Association of North Carolina.

According to Cope, the family coverage costs swelled the ranks of the uninsured in North Carolina, where the state subsidizes coverage for employees, but does not contribute toward family insurance.

“State employees . . . who earn on average $41,000 . . . cannot afford to cover their dependents,” Cope testified before a Treasury panel in November.

“Everyone’s family situation varies,” said Jessica Waltman, a senior vice president at the National Association of Health Underwriters, “so this keeps it level and easier for employers.”

The responsibility to assess a worker’s household income would fall to the state-based exchanges, not to employers, under the proposal.

Employers say, however, that there are other things they need a final decision on – such as the range of benefits they must offer – before they can estimate the cost of their plans in 2014.

“It is difficult to create an accurate assessment for 2014,” without additional federal guidance, said an Oct. 31 comment from Employers for Flexibility in Health Care, a coalition representing employers in retail, restaurant and other service-related industries.

If final rules retain the affordability definition as it now stands, Lesley and others say it will be important to maintain the Children’s Health Insurance Program, which provides coverage for poor children and is funded only through 2015. Harder to resolve, he and other advocates say, will be finding coverage for spouses in families where dependents are ineligible for subsidies.