Will Roberto be able to carry the heavy boxes his job requires if he donates a kidney to his brother, Jorge? How will his family pay their bills if Roberto has to take several weeks off from work to recover from the surgery?

Will Mama consider a kidney donation from her daughter, Carla, or turn her down, worried the procedure will keep Carla from having another baby?

These two telenovela plots have gripped some viewers in the past few months. But don’t expect to see the Spanish-language dramas on a network or streaming service. They’re customized for Infórmate, a new bilingual website dedicated to using culturally familiar methods to educate Latinos about options for living kidney donation.

The marketing strategy is intended to address a growing need among Latinos. Kidney failure in this population has increased by more than 70 percent since 2000, and more than 23,000 Latinos are on the kidney transplant list, according to federal statistics. But too often, researchers and doctors said, families are not aware of the transplant regimen involving a live donor and have unfounded fears about what could happen if they volunteer to offer a kidney to a relative or friend.

“Right now, Latino patients often don’t learn about live kidney donation until they are in crisis, and that is a bad time to be learning about something complex and somewhat foreign to their culture,” said Junichiro Sageshima, a transplant surgeon at the University of California, Davis.

Twenty percent of U.S. kidney disease patients on the current United Network for Organ Sharing (UNOS) transplant waiting list are Latino, but in California that rate rises to 40 percent, about the same as the percentage of Latinos in the state, said Charlene Zettel, CEO of Donate Life California, the parent organization of Living Donation California, a San Diego-based nonprofit that offers referrals and resources for living kidney donations.

While researchers aren’t fully sure why Latinos are so severely affected by kidney disease, rates of high blood pressure and diabetes are also elevated among Latinos, and both conditions are key contributing factors. In addition, large numbers of Latinos lack health coverage, which can prevent getting timely care and can aggravate chronic diseases.

Yet Latinos are less than half as likely as non-Latino whites to get a transplanted kidney from a live donor. That’s an important distinction because almost 6,000 kidney transplants annually are from live donors, close to a third of all kidney transplants, according to UNOS.

Part of that discrepancy is because of cultural concerns about transplants — and especially about live donor kidney transplants, researchers say.

Elisa Gordon, an associate professor of surgery at Northwestern University who led the development and testing of Infórmate, said many Latino families are afraid that donation can decrease virility and fertility. Other concerns are that the Catholic Church opposes it or that becoming a donor could trigger a report to immigration officials. None of those are true.

In addition, many Latinos worry about related costs and don’t know that insurance generally covers most of the expenses for both the donor and recipient. 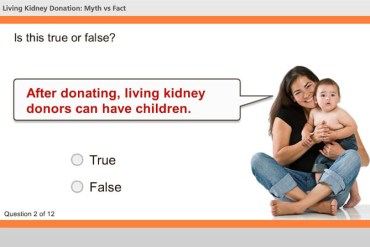 Consumers who visit the Infórmate website can take a quiz on the myths and facts surrounding live donor kidney transplants.

Infórmate deals with all those issues. Besides the telenovelas, the site includes quizzes and games to help dispel cultural and religious myths and video testimonials in English and Spanish from donors and recipients. It also has information on financial issues and links to help patients find transplant centers.

Dr. Elena Rios, president and CEO of the National Hispanic Medical Association in Washington, D.C., said the telenovelas are an especially important feature of the site because they are “familiar.” Many Latino families watch television together so the stories are likely to generate conversation, she said.

Zettel said her group has added a link to Infórmate on the site’s resources page. “We’ve long needed more targeted information health care professionals can use to better inform their Latino patients about live kidney donation,” she said.

Both UC Davis and Northwestern University transplant centers also have added Infórmate to the resources that they offer Latino patients. Researchers at the centers conducted a study that found the website increased knowledge about live kidney donation among Latino patients and their family members.

Javier Oregel, 34, of  Yuba City, California, undergoes daily dialysis and said he learned of the site from the staff at UC Davis. Oregel, formerly a farmworker, became too sick to work and receives medical benefits through Medicare and California’s Medicaid program, known as Medi-Cal. Through a translator, Oregel explained that before scrolling through Infórmate, all the information he had on kidney transplants came from talking with the transplant center staff. Infórmate allows him to get information himself, in Spanish.

He is on the UNOS list for a kidney transplant and is worried about what expenses will fall to him. Although his insurance will pick up much of the medical costs, he learned on Infórmate about some of the associated out-of-pocket spending that a surgery would entail. The site provided him with useful links to organizations that take applications to help cover those costs — even the bill for the hotel room his wife will need if he gets the transplant.

“If a transplant become available, I know I can go back to the Infórmate site to follow up on those resources,” Oregel said.

Paying For A Transplant

Kidney transplants cost $150,000 to $250,000, according to information on Infórmate, not including about $20,000 per year for medication and other expenses necessary for the rest of a recipient’s life. Health plans usually cover dialysis and transplants, as does Medi-Cal, which serves some low-income residents.

Immigrants living in the country illegally who don’t have insurance are generally eligible only for emergency treatment in hospitals. A handful of states, including California, offer coverage of dialysis on an outpatient basis under certain circumstances.

Yet dialysis is just a stopgap measure until a donated kidney — either from a live person or from someone who has died — can be found. The average wait for a deceased person’s kidney is three and a half years.

Kidney transplants save money over the cost of dialysis, but that’s not why medical officials favor them, said Luke Preczewski, executive director of the kidney transplant center at UC Davis. “We do them because research shows that transplants offer a longer and better quality life.”

“Live kidney donations generally come from family members, who are the most likely to be a genetic match, but [they] often come from spouses, friends and even strangers,” said Juan Caicedo, the director of the Hispanic Transplant Program at Northwestern Memorial Hospital and a co-developer of the Infórmate site.

“The bottom line,” Caicedo said, “is we have learned that there is a lot of lack of knowledge about live kidney donation among communities, clinicians, priests, grandparents and others, and everyone has different concerns or misconceptions because of that lack of knowledge. We are trying to solve that with this website.”