Tenet Healthcare Corp., the nation’s third largest for-profit hospital operator, said Tuesday it expects 15 percent of its uninsured patients to get covered this year as a result of the Affordable Care Act. 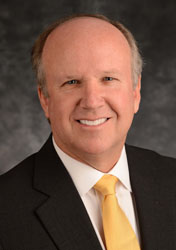 But the company isn’t counting yet on any higher profits from the shift, Tenet officials said after a conference call with Wall Street analysts to discuss its fourth quarter earnings and outlook for 2014.

“Common sense tells you those who have insurance for the first time will use it and seek health care to a greater extent than they did in the past,” Trevor Fetter, Tenet’s chief executive officer, said in an interview. “But we are taking the approach that until we see it, we are not ready to forecast it.”

Tenet, which runs 77 hospitals mostly in California, Florida and Texas, is the first hospital operator to predict how many of its patients would gain coverage, analysts say. California expanded Medicaid under the health law. Florida and Texas have not. Tenet expects 10 percent of its patients to gain Medicaid coverage and 5 percent to gain private insurance through the health law’s online marketplaces.

Tenet officials said the insurance plans being sold on the exchange will pay the company rates similar to that of traditional private insurers. It said the reimbursement will range from the same to 10 percent less.

Tenet is taking an aggressive approach to driving enrollment in Medicaid and the exchanges. This month, Tenet sent out about 250,000 letters to uninsured patients to advise them about signing up for Medicaid or private coverage on the exchanges. It also began calling 10,000 uninsured patients who have been frequent users of their emergency rooms to tell them about new insurance options.

Over time, coverage of newly insured patients under the health law will reduce bad debt expenses at its hospitals and gradually drive higher admissions, Fetter said on the earnings call.

Tenet Expects 15% Of Its Uninsured To Get Obamacare Coverage