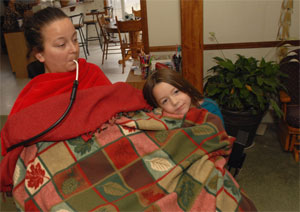 Jessica Pipkin and her daughter Emma, 6. Jessica received around-the-clock nursing care through Tennessee’s Medicaid program. But she lost her benefits in September as part of a state reassessment. The TennCare cuts affected approximately 37,000 who had relied on the state program for all their health care needs. (Chris Berkey/KHN)

LYNNVILLE, Tenn. — After losing the use of her arms and legs in a car accident five years ago, Jessica Pipkin received around-the-clock nursing care through Tennessee’s Medicaid program. Pipkin, 28, said the care — which cost an average of $37 an hour — allowed her to live at home here with her husband and two children.

In September, however, Pipkin lost her benefits as part of a state reassessment of many of the program’s enrollees. Officials concluded that she and her husband make too much money to qualify for TennCare, the state’s Medicaid program.

Pipkin is not alone. About 100,000 people — mostly elderly or disabled residents — have been dropped since January 2009, including approximately 37,000 who had relied on the state program for all their health care needs. Coverage for 8,000 children was also reassessed, but a TennCare spokeswoman said the number of children ultimately cut from the program could not be verified.

The state’s actions follow the resolution of a long-running court case involving people who receive Supplemental Security Income (SSI), a federal assistance program for low-income residents who are aged, blind or disabled and some infants hospitalized for long periods with major medical problems. SSI recipients are automatically eligible for TennCare, but the state had sought to discontinue coverage for those who lost the SSI benefits.

Some enrollees sued, arguing that the state was not taking into consideration whether they qualified on their own for TennCare. In 1987, they got a federal court injunction that prohibited the state from denying benefits to anyone who had ever qualified for SSI. As the case languished for two decades, the number of people affected grew to more than 150,000, about 13 percent of all TennCare enrollees. The group became known as the “Daniels class,” named for Cluster Daniels — one of the original participants in the lawsuit — who has since died.

In January 2009, a federal district court rescinded the injunction after the state argued that its new process for determining Medicaid eligibility had been approved by federal officials. The court action cleared the way for an evaluation of the Daniels class of recipients.

“It is important to note that this is not a ‘disenrollment’ process,” said TennCare spokeswoman Kelly Gunderson. “It’s a re-verification process. … It’s really an issue of fairness. All our enrollees go through an annual reevaluation process. It’s only fair that this group of people does the same thing to make sure they actually qualify for benefits.”

State officials said the process is necessary to remove people from the program who have moved out of state, are no longer disabled or whose incomes exceed the limits. Under state guidelines, recipients cannot earn more than 74 percent of the federal poverty level, or $16,500 for a family of four.

So far, the state has found that 55,000 beneficiaries can continue to receive TennCare benefits. However, reducing 100,000 people is expected to cut the program’s costs $170 million annually, just over 2 percent of its $7 billion annual budget. These reductions are an anomaly this year; Medicaid programs have been barred by the federal government from making even small eligibility changes as a condition of receiving extra funding from the stimulus package.

The controversy is the latest episode in the evolution of TennCare, which was once considered a blueprint for helping the uninsured. Even as the Clinton administration’s plan for national health reform fizzled in the mid-1990s, Tennessee staged the single largest expansion of a Medicaid program in the country, enrolling half a million new beneficiaries. Those heady days are gone. Facing serious fiscal problems, the state during the past five years has pared Medicaid by 200,000 people before beginning the cuts of the Daniels class.

Advocates for Daniels-class recipients who have lost their coverage said they are struggling to get health care and some cannot continue regimens such as chemotherapy, transplant care or expensive medications. “There are no services in the community to replace their care,” said Dan Ramey, a social worker with the Tennessee Health Care Campaign, a nonprofit consumer health advocacy organization. “TennCare was the safety net.”

State officials said that the savings from the Daniels cuts averted even larger planned cuts to the program this year as the state faces a $400 million budget gap that Tennessee Gov. Phil Bredesen, a Democrat, proposes to close with $200 million in TennCare cuts.

“If you’re a state like Tennessee that has significant numbers of people in your Medicaid program who are not mandated to be there, you’re going to be looking closely at them to balance your budget, even if they are in these horrible situations,” said Todd Eberly, assistant professor of political science and coordinator of public policy studies at St. Mary’s College of Maryland and a former Medicaid consultant. “Unfortunately, most of Medicaid is not designed for people in medical need.”

Pipkin said she can’t afford to pay for 24-hour care on her own; her husband earns $19,000 a year as a Direct TV technician and she receives $14,400 in Social Security disability payments, a program that is separate from SSI. She is relying on friends and family members to help her with physical therapy, catheter care and many of her medical needs. She said the loss of TennCare benefits is a serious blow. “I’ve given up being able to put my arms around my children, go to college, help other people,” she said. “I feel like I’ve given up enough.”

She has recently qualified for another program that provides daytime home assistance, but the aide cannot give her medicine, monitor her blood pressure or change her catheter.

Thomas Moore, 64, of Woodbury, Tenn., who is facing serious health issues following treatment for cancer, also lost his TennCare coverage and is now uninsured. He began receiving SSI in May 2008 following a hip fracture, but under federal guidelines, he was required to move to the Social Security program when he qualified at the age of 62. Those monthly benefits put him above the state limit for Medicaid. He is unable to qualify for Medicare health benefits until he reaches the age of 65.

His recent treatment for colon cancer and lymphoma at a hospital in Nashville was covered under his TennCare benefits, but now he cannot afford the surgery he was planning in late August–just weeks after he was cut from TennCare on Aug. 4–to reverse his colostomy.

“I was just flabbergasted,” said Moore. “Here I am three-quarters of the way through getting well after two types of cancer and needing surgery and colon tests and CAT scans to see if the lymphoma’s come back and here they cut me off. There’s nothing I can do until I turn 65 now, except wait and hope I don’t get sicker.”

Hospital and doctors have also complained about the cuts, saying they are being forced to absorb expenses for the former TennCare patients. They note that many of those patients receive specialized, high-cost care for acute medical conditions.

Vanderbilt University Medical Center in Nashville, which treats more TennCare patients than any other hospital in the state, estimates that 1,600 patients who use its facilities or doctors are among those who have been cut from TennCare rolls. Vanderbilt says its uncompensated care has grown from $108 million in 2005 to about $276 in 2009.

Warren Beck, associate vice chancellor for health affairs and senior vice president of finance at Vanderbilt’s medical center, said, “We know patients that have been on SSI are not going to be very healthy. My gut feeling is that we can expect to take on a heck of a lot more patients and responsibility for a heck of lot less money.”