CHATTANOOGA, Tenn. — The dominion of Tennessee’s largest health insurer is reflected in its headquarters’ lofty perch above the city, atop a hill that during the Civil War was lined with Union cannons to repel Confederate troops. 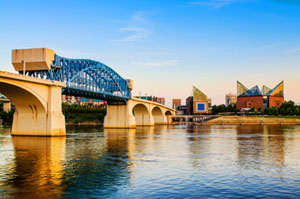 BlueCross BlueShield of Tennessee has used its position to establish a similarly firm foothold in the first year of the marketplaces created by the health law. The company sold 88 percent of the plans for Tennessee individuals and families. Only one other insurer, Cigna, bothered to offer policies in Chattanooga, and the premiums were substantially higher than those offered by BlueCross.

Though insurers have been regularly vilified in debates over health care prices, BlueCross’ near monopoly here has been unusually good financially for consumers. Its cut-rate exclusive deal with one of three area health systems turned Chattanooga into one of the 10 least expensive insurance markets in the country, as judged by the lowest price mid-level, or silver, plan. The premium for a 40-year-old for that plan is $181 a month, 30 percent less than for the median cheapest silver plan nationally.

BlueCross has employed a similar narrow-network strategy elsewhere in Tennessee. Its lowest premium silver plan in Knoxville, built around the University of Tennessee Medical Center, costs the same as in Chattanooga. BlueCross’s least expensive silver plan in Nashville is cheaper than the cheapest parallel plan in the biggest city in every state except Minnesota and Hawaii.

“Providers are concerned about getting shut out of narrow networks,” said John Graves, a professor at Vanderbilt University School of Medicine in Nashville.

Premiums are not low in Chattanooga because people do not require much medical care. Obesity, smoking and hypertension are more prevalent in Hamilton County, where Chattanooga is located, than they are nationwide, according to the Institute for Health Metrics and Evaluation, a Seattle-based research center. Yet insurance prices are in line with some of the nation’s healthiest places: Minneapolis, Salt Lake City and Honolulu.

Chattanooga’s lowest cost silver plan gives people access to Erlanger Health System, a public authority with a network of hospitals affiliated with the University of Tennessee’s College of Medicine. In exchange for lower premiums, consumers choosing the narrow network, labeled the “E” network, have access to 1,257 doctors and medical providers who work with Erlanger, according to the latest figures from BlueCross.

David Yoder, CEO of American Exchange, a Chattanooga insurance brokerage, said the average client on that network has premiums of about $40 a month, with the government subsidizing the rest. “For most people, unless they are really tied to a doctor, the E network is fine,” he said.

Eric Logue, a vice president for the Denver-based Catholic system who oversees the region, said low premiums in Chattanooga and Tennessee more generally were made easier by the long history of narrow networks here.

Logue said some insurers elsewhere “just come and say, ‘For our exchange product we’re going to roll out the same network.’ They’re not taking an approach to change the cost curve, and expectedly you’re seeing the premiums being extremely high.”

Those who want the option of also going to the area’s third health system, run by the for-profit company  HCA and including Parkridge Medical Center, can buy a wide-network policy, but premiums are 30 percent higher than for the Erlanger-only policy. HCA officials declined to comment.

It remains to be seen whether BlueCross will sustain its premium rates in coming years, or if the first years’ low prices were to grab most of the market. BlueCross says that is not the case. Andy Figlestahler, a broker in Cleveland, Tenn., noted that premiums in neighboring Georgia are twice as high.

“Somebody’s got it mispriced,” he said. “Either Georgia is too high or Tennessee is too low.”

The other major question is what effect BlueCross’s payment rates will have on the state’s hospitals and health systems. The low premiums in the Erlanger network have put additional pressure on the health system to lower its costs, an ongoing project for the system.

Already, CEO Kevin Spiegel outsourced the food service and cleaning operations. Surgeons have spearheaded other changes, such as reusing blades and other pieces of equipment they can sterilize. Big hazardous waste garbage bins in the operating room, which are costly to discard, have been swapped out for smaller ones to make doctors and nurses take more care to not add routine waste products to the hazardous materials.

“The days of the operating room being like a grocery store—What’s on the shelf? Anything you want—are over,” said Dr. Benjamin Dart, a trauma surgeon and chief of surgery.

Doctors whose surgeries cost more than those done by their peers are being pulled aside and gently confronted with data showing their outlying status. Dr. Paul Apyan, an orthopedic surgeon who recently sold his practice to Erlanger, said physicians increasingly are realizing they need to help the hospital keep down its costs. “There’s going to be a day when the hospital says ‘Paul, you can’t do that procedure here. You’re too expensive,’” he said. “That’s coming.”

A Tennessee Insurer Uses Its Monopoly To Deliver Bargain Premiums