LOS ANGELES – For most of Teresa Martinez’s life, buying health insurance has been out of the question. She works at a Koreatown hair salon, earning about $10 per cut – not nearly enough to afford private coverage.

With a long list of ailments including dizziness, blurry vision and leg pain, she eagerly applied last year for a county program that would cover her for free until Obamacare set in. 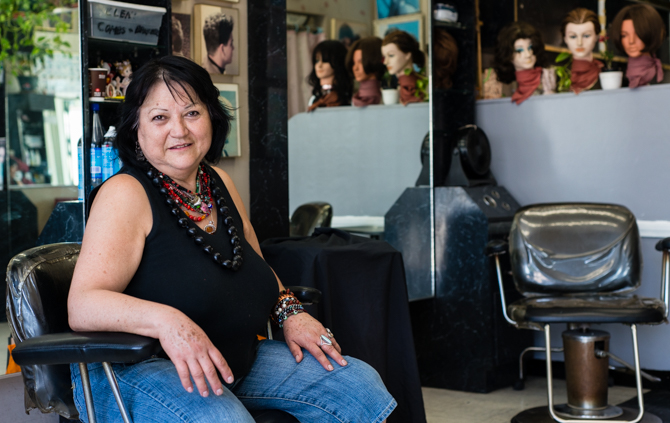 Teresa Martinez, 62, works as a hairdresser at a Koreatown hair salon. She earns about $10,000 per year and cannot afford to buy private health coverage (Photo by Heidi de Marco/KHN).

“I thought at long last, I would be able to go to the doctor and get what I need,” said Martinez, 62, who lives in East Los Angeles. “I was so excited. But that was short lived.”

Without any explanation, Martinez received a denial letter from the Healthy Way Los Angeles, a temporary coverage program for low-income people. Later she applied for Medicaid –known as Medi-Cal in California — which was expanded under the Affordable Care Act to include people like Martinez without dependent children.

But a health clinic worker told her she may have to wait months for approval – and to hold off on appointments until she has her official card. 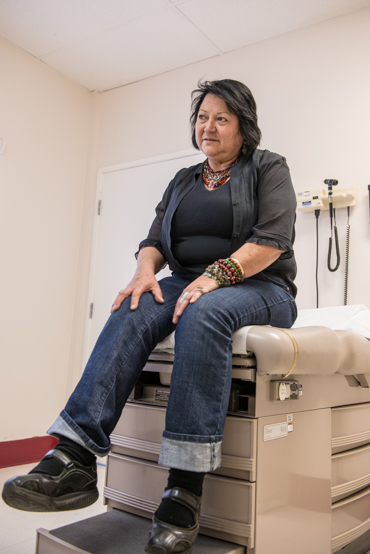 Teresa Martinez complains of leg pain from having to stand for long periods of time working as a hairdresser (Photo by Heidi de Marco/KHN).

Nearly 2 million Californians have gained coverage with the expansion of the Medi-Cal program for poor and disabled people, including those who transitioned from temporary programs like Healthy Way LA.

But roughly 800,000 more applications are pending from people presumed to be eligible for the program. While hospitals are required to accept patients with emergencies, private doctors, health clinics, pharmacies and specialists have discretion over whether to treat patients for non-urgent health needs while they await acceptance into the program.

“If they don’t have final determination of their eligibility, they are probably not able to get care,” said Catherine Teare, senior program officer at the California HealthCare Foundation. That can be frustrating for people who, like Martinez, have long put off for treatment for lack of coverage.

The state has 45 days to process the Medi-Cal applications but it often takes longer and the waiting period varies — sometimes widely — by county. Medi-Cal will pay providers retroactively for care provided to eligible candidates during the waiting period.

The sheer volume of applications is slowing the process, said Norman Williams, spokesman for the California Department of Health Care Services. Adding to the delays are new requirements on verifying income, and the number of incomplete or duplicate applications.

“It is just a big number that has a lot of moving parts,” he said. “We are working very quickly and very diligently to get these people into coverage.”

The delays in confirming eligibility aren’t unique to California. “In practically every state, there are backlogs,” said Matt Salo, executive director of the National Association of Medicaid Directors.

The number of Medicaid applicants nationwide who are in limbo is unclear, said Judith Solomon, vice president for health policy at the Center on Budget and Policy Priorities.  Solomon ascribed much of the problem to inadequacies in technology. Many of the uninsured are seeking coverage through subsidized insurance marketplace websites. When they are deemed eligible for free coverage under Medicaid, their information is not always transferred seamlessly.

At Chela’s Hair Fashions in Koreatown, customers trickle in, some from the neighborhood and others from across town. Friendly and upbeat, Martinez chats with them, affectionately calling them, “mi hija, mi hijo” — my daughter, my son. 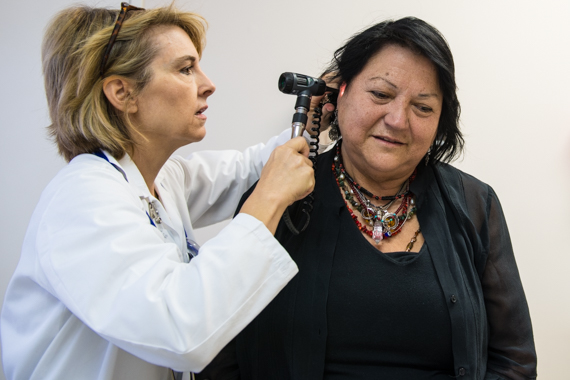 After giving the owner a commission, Martinez said she earns just enough to pay her bills – about $10,000 a year. She relies on her boyfriend to pay the rent on their apartment. “I live day to day,” she said.

Originally from Mexico, Martinez said that she fled an abusive husband when she was 17 and crossed the border with a false identification. She became a U.S. citizen under the 1986 amnesty law and learned English while working — as a babysitter, a waitress, a receptionist and eventually a hair stylist. She briefly had insurance while working for a bank.

In her youth, Martinez said, the last thing on her mind was going to the doctor. She went years without a mammogram and a physical and can’t remember the last time she saw a dentist. When she was in pain, she applied Menthol or used herbal remedies.

“I have always self-diagnosed and self-medicated,” she said. “I pray for everything, especially my good health.”

But Martinez said now that she is getting older, she needs to see a doctor. A fall caused lingering ankle and hip pain. She feared she might have diabetes – a doctor in Mexico once told her she was on the borderline.

In December, she went to a community clinic in Hollywood run by QueensCare Health Centers to get a long-awaited physical. At the suggestion of a health center employee, she applied for the free county coverage program while she was there.  After helping her complete the application, an enrollment counselor told her she would likely qualify and Martinez said she felt great. “What a difference a day could make.”

A few hours later in a spacious exam room, nurse practitioner Wendy Davidson introduced herself. “What concerns you about your health?” she asked as she conducted a brief exam.

Martinez told her she hadn’t seen a doctor in at least 10 years. Her mouth was dry and her right eye blurry. She had swelling in her knee and frequent headaches.

“Do you have any chronic diseases?” Davidson asked.

“Not that I know,” she said. Davidson ordered blood work and encouraged her to make a follow-up appointment.

Going back to ‘herbal stuff’

About a month later, Martinez returned for her lab results. Her blood sugar was a little high.

“We want to make sure you don’t get diabetes,” Davidson said. “With extra weight and high blood sugar, you’re at risk.”

The nurse practitioner urged her to exercise and watch what she ate. “Let’s see if the dry mouth and the dizziness get better with a little bit of exercise,” she said. “I can tell you’re motivated.”

Martinez left with follow-up appointments, including for a mammogram and an eye exam. But then in February, she received the denial letter from Healthy Way Los Angeles and social worker told her to cancel the appointments until she had Medi-Cal.

QueensCare is continuing to see longtime patients awaiting approval but is asking new patients to come back when they have an official card, said spokeswoman Bianca Rodas.

Martinez is frustrated that she still doesn’t have health insurance, nearly four months after her first application. She also fears her blood sugar levels are getting worse.

“I’m really worried,” she said. For now, “I will go back to my herbal stuff as I always have.”

When Teresa Martinez opened her mail in October, she was relieved to finally see her Medi-Cal card. She had been waiting for eight months for health insurance and felt thrilled that her application was no longer stuck in a backlog.

But despite a long list of ailments including dizziness, blurry vision and leg pain, Martinez has yet to make a medical appointment.

“It’s a little bit scary,” she said. “I’m scared of the word C-A-N-C-E-R. The more you age, the more frightened you become.”

In addition to the fear about what doctors might find, Martinez says she has spent nearly her whole life without health coverage and isn’t accustomed to having an insurance card.

“I guess I’m just procrastinating,” she said. “I’m so used to not having it.”

Even though she has been told that she won’t have to pay for doctor’s appointments, she still worries that there might be some unexpected costs.

But Martinez said her legs are hurting more and she also has stomach pain, headaches and chest cramps. She knows she can’t wait much longer.

“I have so many issues, it’s easier to just block it out and think I am as healthy as a horse,” she said. “But I am going to make appointments soon. It’s better to know.”

After decades of having no insurance and months of uncertainty about her application for free health insurance, Teresa Martinez finally has a Medi-Cal card.

But Martinez said she still hasn’t made an appointment to see a doctor at the health clinic that helped her enroll in the coverage.  She has been too busy to go to the clinic, she said.

Martinez has, however, been receiving physical therapy for back and feet problems, which is the subject of an ongoing worker’s compensation case she filed. The doctor also told her that she had carpal tunnel syndrome in her hand.

Martinez said that she will eventually go to the clinic to get a mammogram, a blood test for diabetes and an eye exam. But for now, Martinez is continuing to work as a hair stylist and trying to stay active.

Martinez, now 64, has had her Medi-Cal card for more than a year but said she still hasn’t used it. She said she fears out-of-pocket expenses that she would be unable to afford. The little she makes as a hairdresser, she said, goes toward her rent and food.

Martinez said that she has dizzy spells and headaches and that her legs sometimes give out. “I feel like I am going to fall,” she said. When that happens, she takes herbal medications and tries to rest.

“I should make an appointment and find out what’s wrong,” she said.

Martinez said that even though she doesn’t use her Medi-Cal coverage, she is glad she has it in case of an emergency.

Waiting For Medicaid To Kick In