Texas rejected billions in federal aid to expand Medicaid under the Affordable Care Act, calling the program “broken.” But now it’s asking the Trump administration to renew a deal that’s brought the state an additional $6.2 billion a year under Medicaid to help care for the poor.

Half the money is used to help hospitals finance care for the uninsured, and the rest goes to hospitals and other providers to test regional programs to improve care and access, such as opening school-based health clinics to steer people away from expensive emergency room visits.

State officials are hoping to win a 21-month extension of an agreement that began in 2011 and will expire in December.

Several states receive such funds but Texas’ allocation is the highest. To put Texas’ request in perspective, $6.2 billion represents more than a third of what the federal government now contributes to the state’s Medicaid program annually. Texas kicks in the balance to pay for its $29 billion Medicaid program, which covers nearly 4.8 million people.

Hospitals are counting on the cash to absorb the costs of uncompensated care, which they say has escalated even as the state’s uninsured rate fell from 20 percent in 2013 to 16 percent in 2015, according to the Kaiser Family Foundation’s estimates. (Kaiser Health News is an editorially independent program of the foundation.)

Without the money, programs and services to the poor will have to be cut, including many new health clinics opened to expand access, hospitals say.

“Absent the dollars from the waiver, we would have to start to close the clinics and cut back on the manpower,” said George Masi, CEO of Harris Health System, a large public health system based in Houston.

The uninsured rate has fallen in Houston, but surrounding Harris County still has more than 1 million people without health insurance. 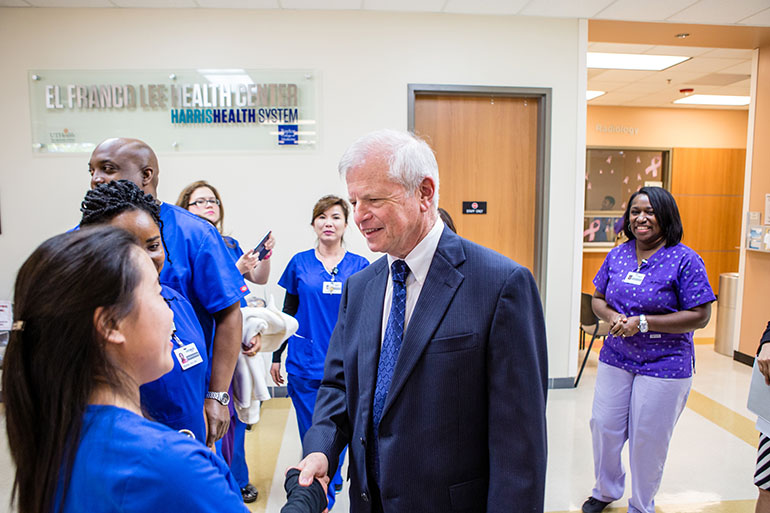 Between population growth and demand from undocumented immigrants, “there is growing need for more uncompensated care,” Masi said. Undocumented individuals are ineligible for Medicaid but cannot be refused emergency care.

When the Obama administration first approved Texas’ Medicaid waiver — and billions in extra Medicaid dollars to go with it — federal officials viewed the action as a glide path toward a formal Medicaid expansion starting in 2014, which the Affordable Care Act encouraged states to undertake. The law required the federal government to fully pay the extra costs of bringing more people onto Medicaid rolls for the first three years in every state that took the offer. Thirty-one states, plus the District of Columbia, did so.

Obamacare Medicaid funding would have added 1 million Texans to the program.

But after the U.S. Supreme Court made the Medicaid expansion optional for states, Texas lawmakers bristled at having anything to do with Obamacare or expanding government health coverage. That left the state’s hospitals in a tough financial spot since they lost some federal funding under the law without gaining patients covered by a Medicaid expansion. Texas hospitals are eager to keep the federal waiver in place as the turmoil in Congress over repealing and replacing Obamacare only increases their jitters.

Last year, the Obama administration was reluctant to promise to maintain extra funding levels to states that did not expand Medicaid and left their hospitals on the hook for treating uninsured people who would have been covered under the law. The Centers for Medicare & Medicaid Services told Texas to expect its Medicaid waiver funding to be cut by billions starting in 2018.

Anne Dunkelberg, associate director of the Center for Public Policy Priorities in Texas, a left-leaning think tank, said Texans would be better served by expanding Medicaid but, since that isn’t politically possible, the waiver money is vital to help hospitals care for the uninsured. “The hospitals still have tons of uncompensated care and it will be painful for them without this money,” she said.

Texas set up 21 regional health programs to oversee hundreds of pilot programs paid for by the waiver money intended to improve care to the poor. The demonstration projects paid for by the waiver money probably could not continue without the federal funds, according to an evaluation report released last month by Texas Department of Health and Human Services. The report concluded some projects did help improve patient outcomes, but it’s too soon to determine if they can help lower hospitals’ costs of uncompensated care.

At Baylor Scott & White Health, based in Dallas with facilities in north and central Texas, the waiver money has provided more than $200 million in funding over the past five years for uncompensated care and another $132 million for health projects. “This money allows us to care for uninsured folks that otherwise might not get care,” said Bill Galinsky, vice president for government finance at the health system.

Baylor Scott & White has participated in 37 health projects funded by the waiver to develop ways to treat more than 100,000 low-income people. Other efforts included placing 10 social workers in primary care clinics to provide one-stop care for patients with mental health and physical health needs. The system has also worked with community agencies to increase providing healthy meals to families. “We are cautiously optimistic” that the waiver money will continue, Galinsky said.

Harris Health used part of its $350 million a year in Medicaid waiver dollars to open six primary care clinics with integrated mental health services. “Before the waiver, the primary care doctors could treat the backache or strep throat but would struggle to deal with the depression or bipolar,” Masi said.

Without continued federal funding, most of the new positions would disappear, according to Masi.

Memorial Hermann, one of the state’s largest hospital systems, which is also in Houston, also allocated a portion of its waiver money — $150 million a year — to do more than care for the uninsured, said Dr. Benjamin Chu, the former CEO, who was interviewed before his resignation was announced June 19.

The hospital system opened crisis prevention units and school-based health clinics. Other funds paid for a team that manages mental health patients after discharge from hospitals, connecting them with follow-up services to reduce repeated visits to an emergency room.