This story is part of a reporting partnership that includes KUHF,

Starting in 2012, health insurance plans in Texas — and most of the rest of the country — may have to cough up millions of dollars in rebates to customers. The rebates will come from health plans that spend too much on administrative costs instead of medical care. The change is part of the national health overhaul law, the Affordable Care Act. 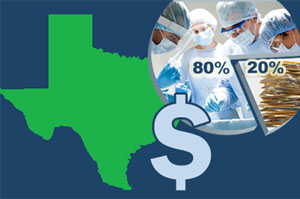 But state officials in Texas and 16 other states have asked to push back the requirement for a few years.

Bob Vesey is a small business owner who could benefit from the rebates. Vesey is the owner of Packtech, a foam fabrication company that he started in 2003 in Grand Prairie, Texas, a town near Dallas.

Packtech has only three employees, and Vesey and his wife have to buy their own health insurance on the individual market. Right now the couple pays $764 a month to Blue Cross Blue Shield, and the premium keeps going up every year, sometimes twice a year.

“Right now I get these letters. I cringe every time I get an envelope from BCBS,” Vesey says. “I say ‘Oh, here’s another one.’ You just don’t even want to get that mail. You just don’t want to receive it.”

Vesey has his eye on the insurance rebate provision of the Affordable Care Act called the medical loss ratio, or MLR.

In a nutshell, the MLR requires insurance companies to spend at least 80 percent of what they take in, on actual medical care. The other 20 percent can go to overhead and profit.

“That’s reasonable in the mind of any Texan I’ve ever met,” says Blake Hutson, an advocate with Consumers Union in Austin. “And that 20 percent, you can go keep spending 20 percent on your administrative overhead, which is things like lobbying or paying CEO salaries. They can still spend money on those things, but they’ve just got to give us a baseline.”

Insurance companies who now exceed the 20 percent will have to rebate an estimated $160 million next year to Texans who buy insurance on their own.

But the Texas Department of Insurance has asked the federal government for a delay. Under that plan, insurance companies would have three years to reach that 80 percent.

The state told the federal Department of Health and Human Services that the phase-in of the rebate program is necessary to prevent smaller companies from leaving Texas or going out of business.

The Texas Department of Insurance declined to comment for this story.

Robert Zirkelbach is a spokesman for America’s Health Insurance Plans, the national lobbying group for insurance companies. He says that the new regulation tries to make insurers responsible for rising premiums, when really the problem lies with doctors, hospitals, and drug and device companies.

“The biggest issue is it doesn’t get at the soaring cost of medical care,” Zirkelbach says. “And instead it imposes a new arbitrary cap on health plan administrative costs. Some plans may have no choice but to exit the market altogether, and people could lose the coverage they have today.”

More than 30 companies offer individual insurance in Texas. In contrast, Maine, the first state to win approval for its application to waive the requirement, has only three companies in its insurance market.

Consumer advocates say that even if a few Texas companies do drop coverage, it’ll be less a threat and more like good riddance.

Take, for example, Standard Life and Casualty Insurance. That company spends only 53 percent of premiums on medical care, with the rest going to overhead and profit, according to the state documents filed with the feds.

“Which I think would surprise some Texas consumers that we have some plans out there that offer that little value,” says Stacey Pogue of the Center for Public Policy Priorities in Austin. “The new rules that are put out would end business as usual for these types of low-value health plans and that benefits all consumers.”

Standard Life and Casualty did not respond to requests for comment.

For their part, Texas’ Democratic representatives in Congress have sided with the consumer advocates, encouraging HHS to turn down the Texas request for a delay.

Austin Rep. Lloyd Doggett, who chairs the Texas Democratic delegation, disparaged the state’s move as “nothing more than an early Christmas gift from Governor Perry’s allies to insurance companies.”

The feds will probably rule on the Texas request sometime in January. Of the 17 states that have applied to change the rebate rules, six have been denied, five were approved with modifications, and five are still under review, according to documents from the Centers for Medicare and Medicaid. Only Maine got full approval for its request.